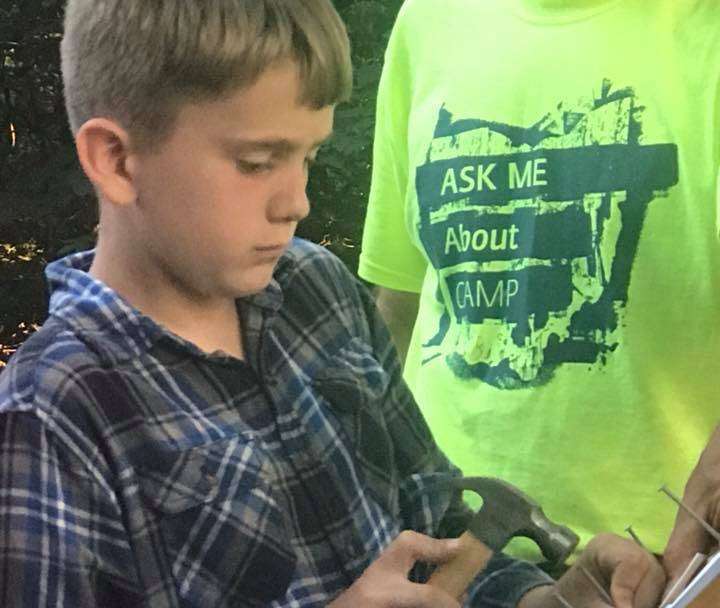 KEEPING BUSY … There were project opportunities galore at Camp Wesley.

Callie Jacoby, the Children’s Ministry Coordinator of the Tedrow United Methodist Church, had a lot to smile about with her youth troupe that in July, attended Camp Wesley in Bellefontaine. Being in Tedrow, a community whose 2010 population was all of 173, the strength of Callie’s youth group is nothing short of impressive.

“We typically have 30 kids on a Wednesday night in our in our youth program,” she said. “Ages three to 18. Our group, if they participate on Wednesday nights and they do service projects, they earn points.

Those points equate to payment for them to attend church camp for a week. Our community is very generous, and we raised the dollars for them to be sponsored to go to church camp. They also do that through their own fundraiser. We do a Little Caesar’s Pizza fundraiser, and we also have contributions from the community.”

Callie continued, “Camp Wesley is all about servant leadership, and they were involved in different projects throughout the week to really give back to the community. They had a food pantry…they were actually on the local news, and my mom had them on TV for their contribution in going in and moving pallets of food and really contributing to make sure that that food bank was prepared for all of the flow of people that were coming in for that week. That was just one of the projects that they did.

They also went to the home of a gentleman who has been battling cancer. They painted his house and cleaned up the landscaping and just different projects that he needed completed. then they did another day of service right at the camp where they helped with some of the structures that needed cleaned up and painted, and so their week was all about giving back.”

“I took them down there and I picked them up, but I was not a part of that week,” Callie said. Was there however, a noticeable difference from the time that she took them down there, and the time that she brought them back? You know what the coolest thing that for me there was? Just the sentence that was said that just nailed it right there as to why I do this? One of our high schoolers that attended said, ‘I prayed with a young person who was much younger than myself, and I was a part of them accepting Christ.’

‘I don’t know much better you can get than that much influence; he was directly a part of that young man and that decision. I think when the kids go down and they’re giving back to their community, and you’re also partnering it with the things that you’re teaching them on Wednesday nights, it’s that foundation.;

‘To have a child come back, that same child accepted that Christ there years ago and has continued to grow into a leadership role there, and now has been directly involved in seeing a third grade boy and being a part of and praying with that boy, and having that result.”

“That’s why I do what I do. That keeps me going for another 10 years, because we’ve been doing this for 12 years. I started it with four kids and a six-week commitment. Little did I know. 12 years later, we’ve got about $5,000 a year donated.’

‘I mean, our community donated roughly $60,000 over that time frame for these kids to experience that.” Once again, bear in mind that we are talking about Tedrow, which with a population of 173 barely clears hamlet status. “You don’t have to overcomplicate it,” Callie explained, adding, “…you can do very simple things that make a difference, that’s for sure. I think that you learn as much from the kids as they learn from you.”

Scripture shows that through the example of Gideon, that God can do incredible things with a very small amount of people, and the symbiosis of the Tedrow United Methodist Church and the community proves the point. “It is a very small community,” Callie said, “…and we are very small congregation. We have more people there on Wednesday nights with all the teachers and helpers and kids than we do on a Sunday morning.’

Amazing things are indeed happening, and they are happening not in some metropolis, but in Tedrow, Ohio. Tiny community…huge impact. The spirit of Gideon is alive and well.