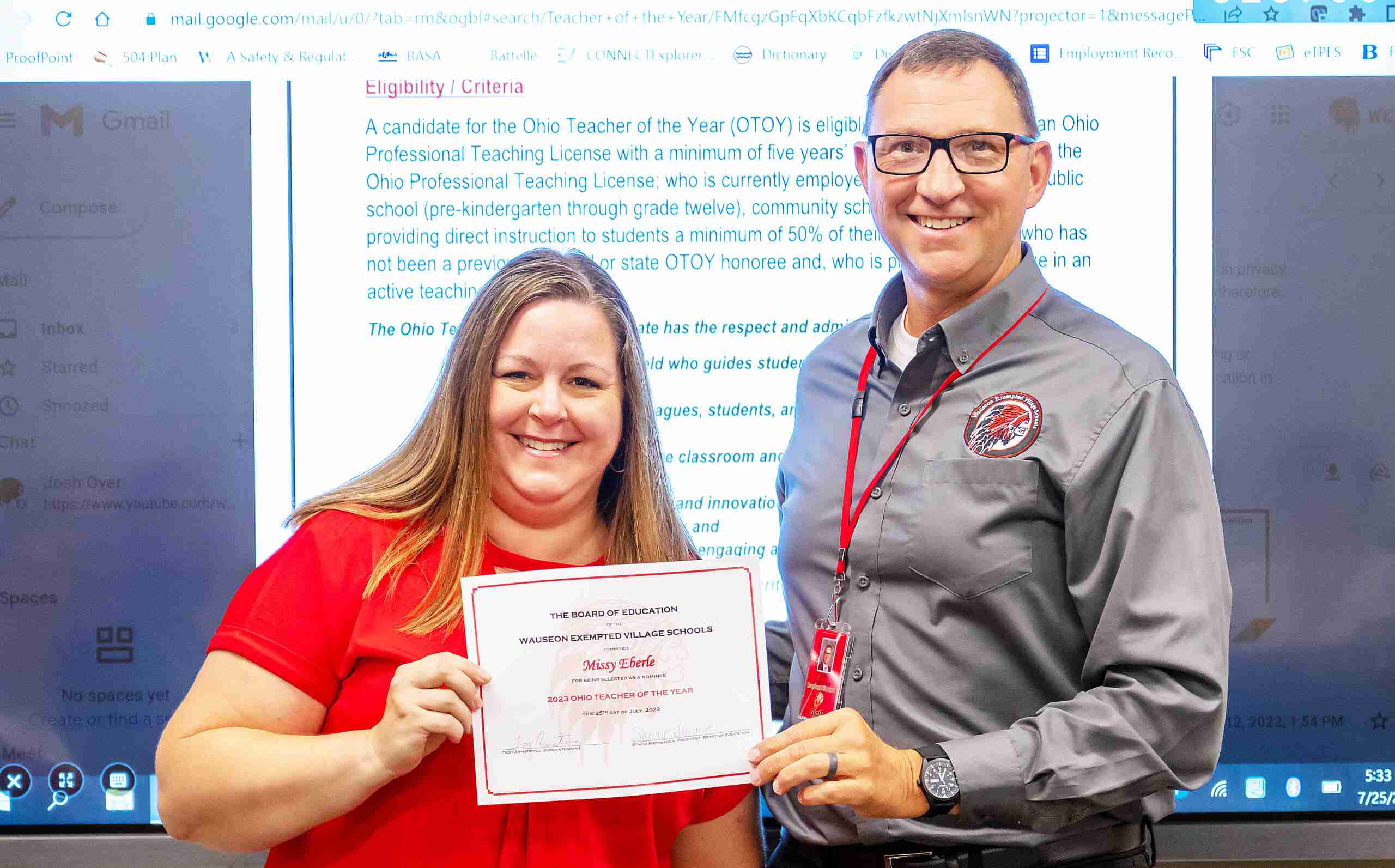 TEACHER OF THE YEAR … Missy Eberle stands with Wauseon Superintendent Troy Armstrong after being presented with a commendation for being selected as a 2023 Ohio Teacher of the Year Nominee. (PHOTO BY JACOB KESSLER, STAFF)

The Wauseon Board of Education held their meeting on Monday, July 25th. The meeting began at 5:30 p.m. with the Pledge of Allegiance.

The board first moved to recognize and commend Michelle Eberle for being selected as a nominee for the 2023 Ohio Teacher of the year.

The agenda for the current meeting was then approved by the board before moving to hear a presentation from the school counselors and Director of Instructional Services.

The counselors and Director of Instructional Services spoke to the Board about LGBTQ students in the school and the education staff members receive.

A slide show was presented to board members which was discussed. Slides discussed LGBTQ Terminology, defining “sex” and “gender,” critical points, a diagram showing a Genderbread Person and more.

An explanation was given regarding the different terminology for LGBTQ. The critical points to remember slide discussed students being entitled to have their transgender status confidential.

It was also stated by the counselors that science is changing and is showing that there are differences between sex and gender.

Other issues were also discussed including court cases which have come up over allowing a transgender person to use a different restroom or locker room and the reading of a different name during graduation.

Board Member Larry Zimmerman asked how many students the school is seeing with this terminology. It was stated by the school counselors that it is more one percent and that the number is getting younger and larger every year.

The question then arose of what the school is supposed to do when a child wants to be called something different and use a different bathroom, if the parents should be contacted.

It was stated by Superintendent Troy Armstrong that there is a different protocol for school counselors than with administrators.

“I think communication with parents is key in this situation with students being, were always student first but in some situations, parents need to be informed by us because we need to have their input on exactly how do we respond. Whether the child is five or eighteen, it’s going to look a little different,” said Armstrong.

He also explained to the board that the board policy company NEOLA is looking at all the recent case laws with their legal counsel and they may have an expanded policy in the near future.

Policies for issues such as this will be discussed more when that policy is available.

The counselors stated to the board that they would like to educate the staff members within the first couple days of school during the staff days, with each school having differences in education.

It was stated that the high school staff has already gone through the education. It was also stated that teachers are wanting guidance on how to handle situations due to a lack of knowledge.

The board next moved on to executive session to discuss employment and compensation of an employee and for the preparing for, conducting, or reviewing of negotiations or bargaining sessions with employees regarding their compensation/other terms and conditions of their employment.

Upon the board’s return, the bills and financial reports were approved along with the then and now certificates.

The board then moved to allow the board president to enter into and execute an employment contract for Troy Armstrong for the position of Superintendent for five years commencing on August 1st, 2022.

Numerous other personnel items were also approved before the board moved to approve the following additional items.

The 2022-2023 student handbooks, 2022-2023 bus routes and collective bargaining agreement between the Wauseon Education Association and the Wauseon Board of Education were also approved.

Lastly, the board moved to approve a request for early graduation before moving to adjourn the meeting for the evening.