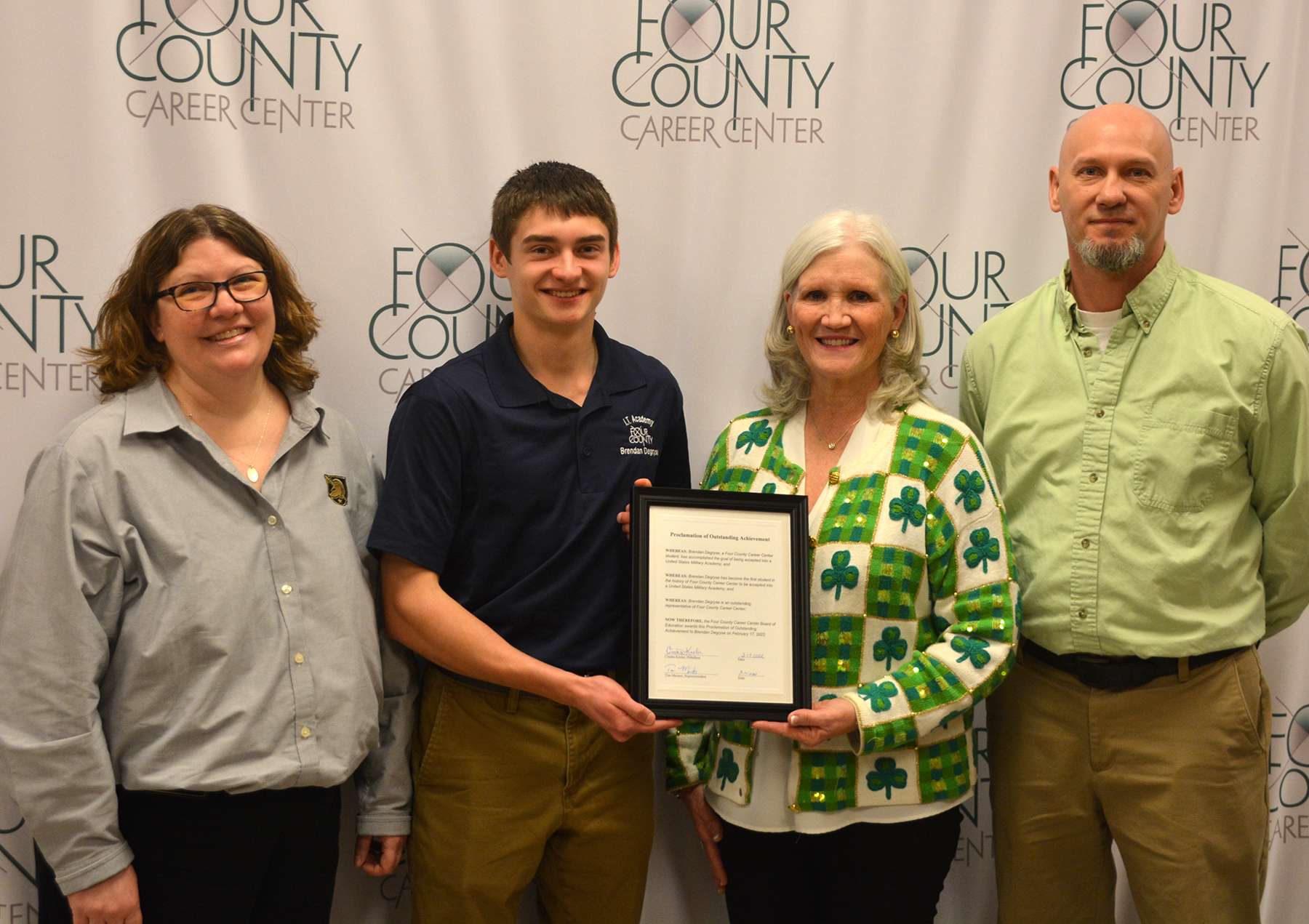 Ever since he was a small child and going back as far as he can remember, Fairview senior Brendon Degryse, A Bryan resident, has wanted to go into the military.

That dream started to come together when he enrolled at Four County Career Center for his junior year.

“One big interest for me is computers and going into my junior year I found that computers are now big in the military and I felt that this would allow me to do both.”

Finally, on January 6 of this year, Degryse’s dream came true, when he was accepted into the Army, at West Point. That makes Degryse the first Four County student to be accepted into a military academy.

“This has historic significance and the most prestigious one,” said Four County superintendent Tim Meister. “Brendon becoming the first has broken down a lot of barriers and we’re pretty proud of him.”

“We’ve had to fight a stigma here. Just 15 years ago, Four County was not the place to go if you wanted to go to a four year college.”

“But as of five years ago, a significant portion of students graduating from here, now go to a four year college. I think that Brendon getting accepted into the military is the final barrier we’ve had to break.”

Degryse stated that there was a lot of hard work and preparation involved in getting accepted to West Point. He explained all that when giving a presentation to the Four County Career Center School Board meeting.

“I explained to them all the steps I had to take before I got accepted,” Degryse said. “First, in March 2021, I sent an application to West Point, then I applied to the summers experience, submitted my ACT scores, then talked to congressmen.”

“Then, I found out in January that I was accepted to West Point. I’m pretty excited. I plan to major there in computer science.”

“There was a sense of pride for Denny and he said that Brendon’s getting accepted does so much for Four County,” Meister said.

Going back a bit, Lori Polter, a Fairview guidance counselor and Matthew Geiger, Degryse’s Four County teacher in computers, were both instrumental in getting Degryse to go to Four County.

“My parents (Corey and Rochelle) were unsure about Four County, but after talking to both of them, they were okay with me going to Four County,” Degryse said.

Now that Degryse has broken the barrier by getting accepted to West Point, what advice does he have to other Four County students who want to get accepted at a military academy?

“Get very good at push ups, sit ups and running and get involved in leadership roles in clubs, because that’s what they look for,” Degryse said.

Among extracurricular activities that Degryse has been involved in are archery and golf at Fairview, National Honor Society at Fairview and also at Four County, on the leadership team for student ambassadors and president of the Business Professionals of America.

Not long after graduation from Four County, Degryse will be headed to cadet basic training at West Point, beginning with Reception Day, on June 27.

“I’m very excited,” Degryse said. “They have a good academic program and there will be a lot of opportunities for me.”