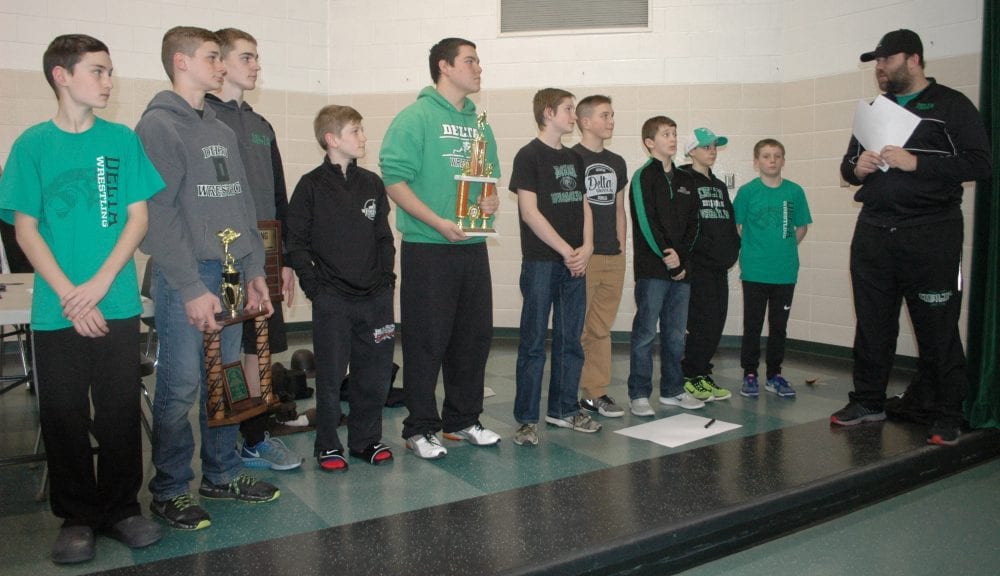 Successful students at Pike Delta York Schools were celebrated at the March 15 meeting of the Board of Education.

The board had its meeting at the Middle School cafeteria-auditorium. Several middle school students were among those recognized by the board.

This included Maddie Tack as Middle School Student of the Month. Tack was also a part of a trio ( who performed a skit about the Women suffrage movement in Britain for National History Day called “The Empty Box.) Tack was joined by Jaydyn Friedman, and Leigh Morris.

Principal David Ford recognized the teachers who helped out with the Panther Den before/after school program.

Past Elementary Student of the Month Aubree Perdew was honored.

The board approved the 2017-18 school calendar. There was some debate about scheduling graduation on a Thursday night, May 24, but Superintendent Ted Hanselman said the date is one that will not conflict with track and field events. Baseball and softball games are easier to reschedule.

The board approved an overnight trip for 20 district students to compete in the State National History Day event in Delaware, Ohio , April 28-29. Parents will be responsible for travel and lodging.

Twenty-five students competed at the district level in Bowling Green March 4. The theme this year was Taking a Stand in History and the students selected many interesting topics for their projects, teacher Jane Foor said. The top three projects in every category and each level, junior and senior, qualified for the state competition. Twenty of the 25 PDY students received medals and qualified for state competition.

The students will be competing on the Ohio Wesleyan University campus.

The qualifiers are:
Individual Website Junior The Federalist Papers: Taking a Stand for the U.S. Constitution -Alana Hardesty

High school students Sydney Schauwecker and Hailey Hoffman made it to the final round of judging (top six) but did not advance to state.

They created a senior group documentary entitled Shining the Lights of Truth: How Ida B. Wells Took a Stand for Civil Rights and the End of Lynching.

The board also approved an overnight trip for students who qualified for the State Destination Imagination competition April
Students competed at the Region 10 tournament, Feb. 25, and 13 of the 14 PDY teams received medals and trophies.

Parents will be responsible for transporting their child to and from the tournament.

The teams are as follows:

The middle school’s Panther Den report from Principal Ford shows 65 percent of the students are on the free or reduced lunch status. The program has seen attendance rise from 27 at the first of the school year to 91.

Eighty-nine percent of parents feel more connected to their community.

Twenty-one students have been referred to the program in the past two months.

The program is paying off academically with 32 students improving at least one letter grade in a core subject and 50 total letter grade improvements among those 32.

Elementary School Principal Ellen Bernal reported increases of students in grades K-3 being on track in reading and math from the first of the school year. In reading, the number of students not on track went from 61 to 44 (a 27.8 percent improvement and for math, the numbers went from 40 to 31, a 22.5 percent increase.

Three teachers and 20 female students toured North Star Blue Scope Steel as part of the Women in Steel Initiative. The entourage listed to women at mill following the tour.