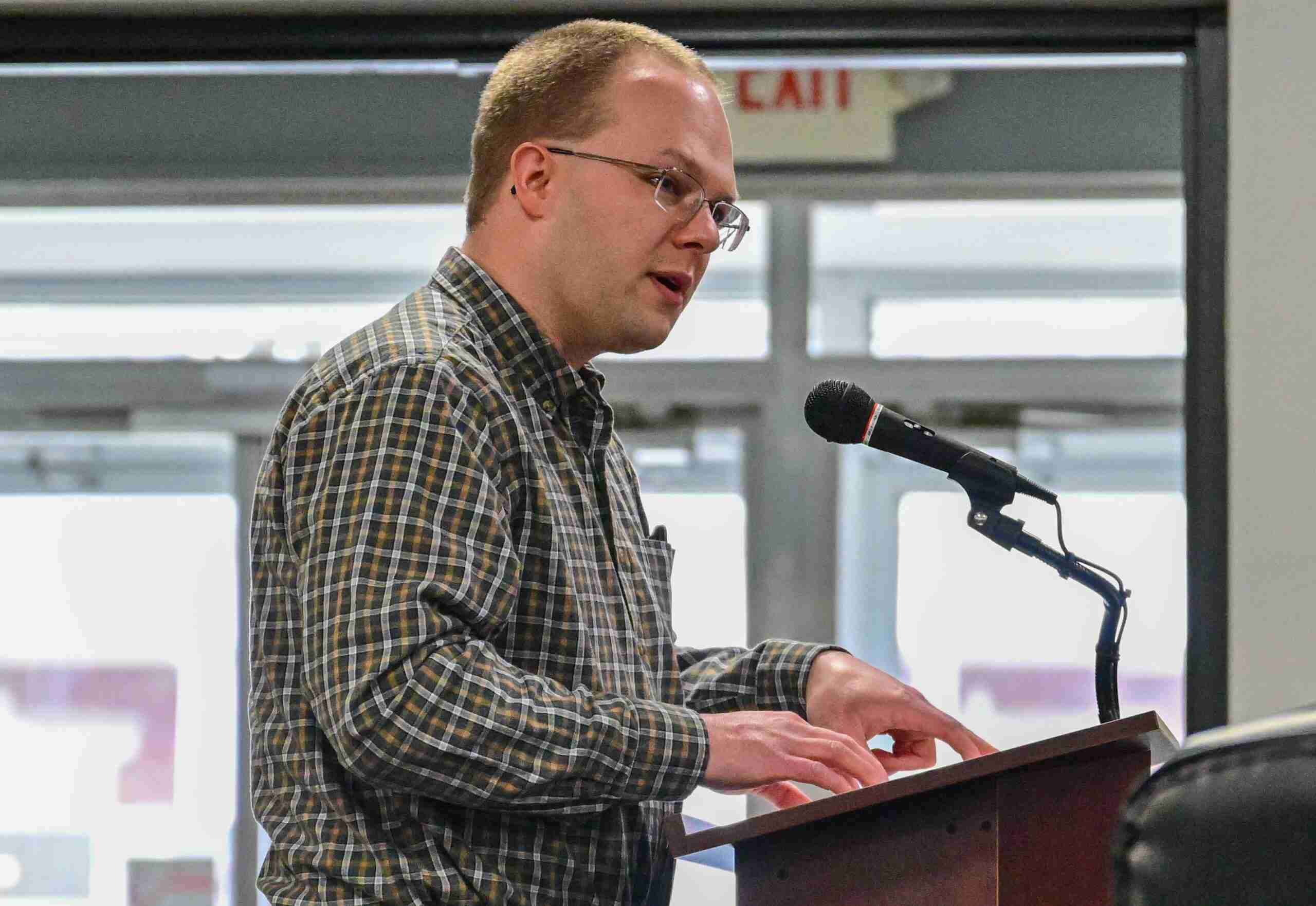 BUNTING BEARINGS … Kyle Comers addresses the Delta Village Council in regard to questions he has for the Bunting Bearings Initiative. (PHOTO BY JACOB KESSLER, STAFF)

The Delta Village Council held their meeting on Monday, April 4th. The meeting was called to order at 5:30 p.m. followed by the observance of the Pledge of Allegiance and a prayer.

Council first moved to approve the minutes for the previous meeting that was held on March 21st. The floor was then opened to any member of the public who wished to address council.

Kyle Comers came first to ask questions about the Bunting Bearings initiative. He first asked about the grant that was discussed at a previous meeting, for the clean-up at the site.

Village Administrator Brad Peebles explained to Mr. Comers that the Fulton County Commissioners created a Land Bank and that, as part of the creation of the Land Bank, the State of Ohio grants them an initial $1 million for site remediation.

They also grant the county $500,000 for the demolition of buildings in a remediation effort. This will require the buildings to be donated to the Land Bank first, for the site remediation funds to be able to be used on the property.

Testing has been done annually at the site and has shown that the remediation does not appear to be extensive.

Mr. Comers then stated that the remediation has been his concern due to knowing someone who used to work at the location who gave the impression that there were several hazardous materials on site.

Mr. Peebles then explained that what has been encountered is minimal and is mostly foundry sand and foundry dust. All contamination is also within the first 12-inches of the surface.

“The worst-case scenario is that they may have to remove 12-inches of soil to be replaced with new soil. It’s not like it is a liquid that saturated the ground, it’s all basically surface contamination,” stated Mr. Peebles.

Mr. Comers then asked what would take place, and if the village would be on the hook, if remediation efforts exceeded the $1.5 Million.

Mr. Peebles stated that the village does not own the property and would not be on the hook for it. The Land Bank owns the property until it is completely cleaned up, at which point the village and the county would negotiate for the sale and use of the property.

Next, Mr. Comers asked why the village will need to be paying $250,000 for the land.Mr. Peebles explained that there are two parts of this initiative.

Everything south of Maple Street, the company was going to donate to the land bank since the buildings are not being used.

They have downsized now to where the only building left would be the larger building on the North side.

“The intent is, with the village participating in the relocation of the business, that larger building will also be able to be demolished.

And then we can have a planned re-use of the property. The village will be reimbursed. At this point I can’t tell you it’s all of the investment of $250,000, but we will be reimbursed either through the sale of the land from the developer, whoever it becomes at the time of clean-up.”

“Anticipating that we are going to use it for apartments. I think that would be what the intended use of that property would be.”

“We will also capture, and we will retain the value of all the scrap derived from the construction of the buildings,” stated Mr. Peebles.

The discussion then turned to a need for housing in the village. “We have a recognized need for additional housing,” said Mr. Peebles.

A housing study was completed 2 years ago that showed an immediate need of up to 75 units in Delta.

“If we are going to continue to grow as a community, the next phase of economic development has to be to bring people in that want to work.”

“People who typically work in a community, some people look to live in that community. We can’t offer that, we can’t provide that opportunity today.”

“There are virtually no houses for sale and virtually no lots to build houses on. So, apartments are of demand, especially with the younger generation,” stated Mr. Peebles.

He also went on to explain that the newer apartments will be a mixture with multistory apartments and that they will not be subsidized housing.

The developer that is currently being worked with does not work with HUD and only works with market rates.

Council then heard from John Bay who wished to speak about ordinance 22-02. He requested that council amend the ordinance to keep funds in the Park Fund instead of transferring them to the General Fund.

After speaking, council informed Mr. Bay that the funds are not being taken from the Park Funds, and that they are being transferred to the Park Fund from the General Fund.

Next, council heard a report from the Village Administrator. Mr. Peebles informed council that the annual review of liquor permits had been completed.

A motion was requested and approved to move ahead with no public hearing due to there being no other permits needing to be heard.

If the diving boards, rock climbing wall, and the depth of the pool is decreased, the cost is reduced to $4.5 million. Interest rates were originally being looked at for around 3% for a 20-year term.

Interest rates are going up and in today’s market interest rates on a 20-year bond is 4.5% with no guarantee of stability.

To request a $4.5 million bond issue, it would take 6.2 mils to be approved by the voting public of Delta.

There would also need to be an additional 1 mil of operating levy for the pool. There is currently a 1.25 mil for the pool so a total of 2.25 mils would be used for the pool annually. 1 mil in the Village of Delta produces around $56,000 annually.

Legislation will be brought before council during the next meeting in order to bring the issue to voters in the August election.

Mr. Peebles also brought up the idea of a Park District which would be able to handle the pool and would be its own taxing district.

Brush pickup was discussed next with it being stated that the pickup is for tree limbs, not leaves. There are now also two open positions at the Water Department.

A request was then made and approved to pay for the invoices as presented.

The following Ordinance and Resolutions were then approved by council. The Second Reading for Ordinance 22-02 to supplement Ordinance 21-13 to make supplemental appropriations for the current expenses of the Village of Delta for the fiscal year ending December 21st, 2022.

The Second Reading for Resolution 22-06 authorizing the Village Administrator to execute a cooperative agreement with the Fulton County Land Bank, Bunting Bearings Inc. and the Village of Delta for the transfer of property, environmental testing, remediation and redevelopment of the area.

The First Reading with Emergency Provisions for Resolution 22-07 authorizing the participation in the ODOT road salt contracts awarded in 2022 and declaring an emergency.

With no further business to attend to, council moved to adjourn at 5:59 p.m.