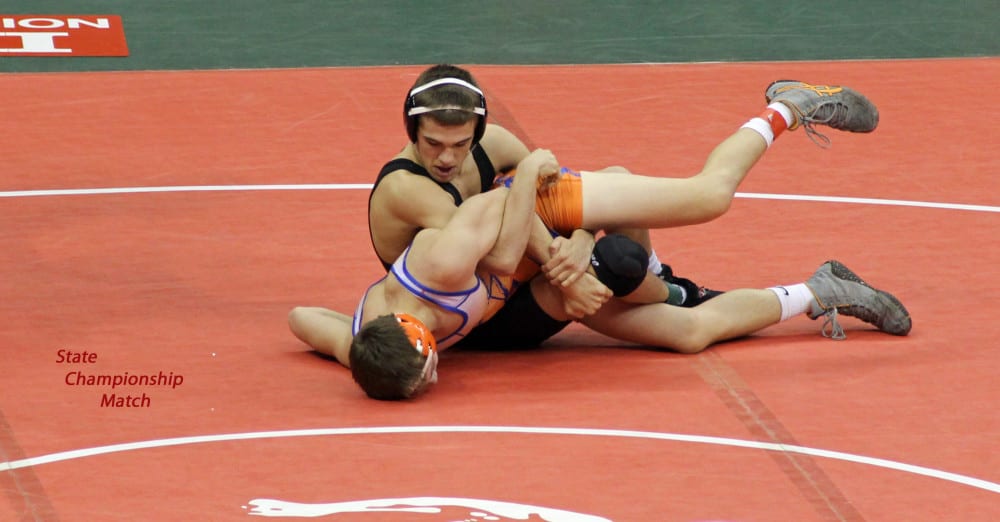 By: Bill Bray
THE VILLAGE REPORTER

DELTA —In the annals of NWOAL history there has been one wrestler that claimed three state championships in Clark Forward of Archbold. Move over Mr. Forward you have company.

Spiess has been on the wrestling scene since the days when he was a four-year-old wrestling in Bryan. “My parents just threw me in there for fun to give me something to do,” Spiess said with a chuckle. “It wasn’t until fifth or sixth grade that I began to get good at the sport. It was like a switch flipping to on.” As a sixth grader Jake won the 74 lbs. bracket at the junior high state tournament. After a subpar state tournament in seventh grade, Spiess came back as an eighth grader and dominated every match he appeared in in the 96 lbs. bracket.

After completing a perfect record in his last year of junior high, he was ready to take on the “big boys” at the high school level. “I got my eyes opened immediately as a freshman with my first tournament being the Iron Man Tourney. That was just brutal,” Spiess remembered. The Ironman Tournament sees the “crème of the crop” high school wrestlers competing from all around the country and is held at Walsh Jesuit High School in Cuyahoga Falls, Ohio in early December. But after that experience to start his high school career, Jake settled in and went into the state tournament in the 103 lbs., bracket with a terrific 41-4 record. “I had a first round pin, second round pin, a close semifinals match then an overtime win in the for my first state title,” Spiess remembered.

The sophomore year was even more impressive as he entered the state meet with a perfect 45-0 record wrestling in the 113 lbs. bracket. “it ended up being a miserable loss for me,” as two years later, the semifinal loss to Evan Ulinski still puts a sad look on the champ’s face. “I got caught on my back with four seconds left and lost the match. Then came back and won the third and fourth place match,” Spiess said.

Spiess’ competitive spirit was evident that day with the fact that his bronze medal never made it back to Delta. “I don’t know, I really can not remember what happened to it, I either threw it away either at the Schottenstein Center or back at the hotel, it meant nothing to me.”

After his 47-1 sophomore season, Spiess’ junior season got off to a slow start. “I was hurt for the first few weeks of the season,” Spiess recalled. I came back not being at my right weight class so I went up a class for a few matches,” Jake continued. “But by the end of the season when I got my weight down to 120 lbs., I was beating kids up pretty good and won the state tournament pretty handily pinning Archbold’s Damian Short as he returned to the top of the podium.

Going into this season Spiess moved up to the 132 lbs. bracket and as he said, “I felt good all around.” Jake started off the season finishing an impressive seventh at the Iron Man. “It was a very tough tournament as always,” he said. “I won every other tournament I competed in except the Maumee Bay tournament. I lost to the kid that won the Division I state this year by a 2-1 count. After that tournament I did not have another match within six points the rest of the season. My record this year was 50-3 and I finished my career with a 187-13 record.

Spiess, besides his individual accomplishments, has been part of two individual team state championships and four dual state titles.

With all those state trophies and medals, it is 2016 that he will always remember. “By far, this year, because I went going out on a good note for my high school career. Our team winning the state dual tournament and the state tournament was pretty cool,” Spiess said with a smile.

So this one definitely sticks out, but winning the three state titles will always be great feeling I will never forget and doing it with other great wrestlers.” Hopefully more people can do it going forward. When I get done with college I would love to come back and help. It would be awesome to watch other kids grow up and watch these kids hopefully do something I did. And show everyone how tough the NWOAL is.”

The three-time state champion had this advice for those future Panthers. “You just have to put in the work and the time and wrestle year round if you want to be good and definitely put a lot of time on the weights. If the younger kids are not in the weight room they will struggle that is for sure.”

“Because of my hard work and the outstanding support and help from my parents and coaches, I will continue my wrestling career at Eastern Michigan University and am anxious to see how it goes there.” Hopefully Jake Spiess will always be remembered in the Mid American Conference just as he will in the Northwest Ohio Athletic League.