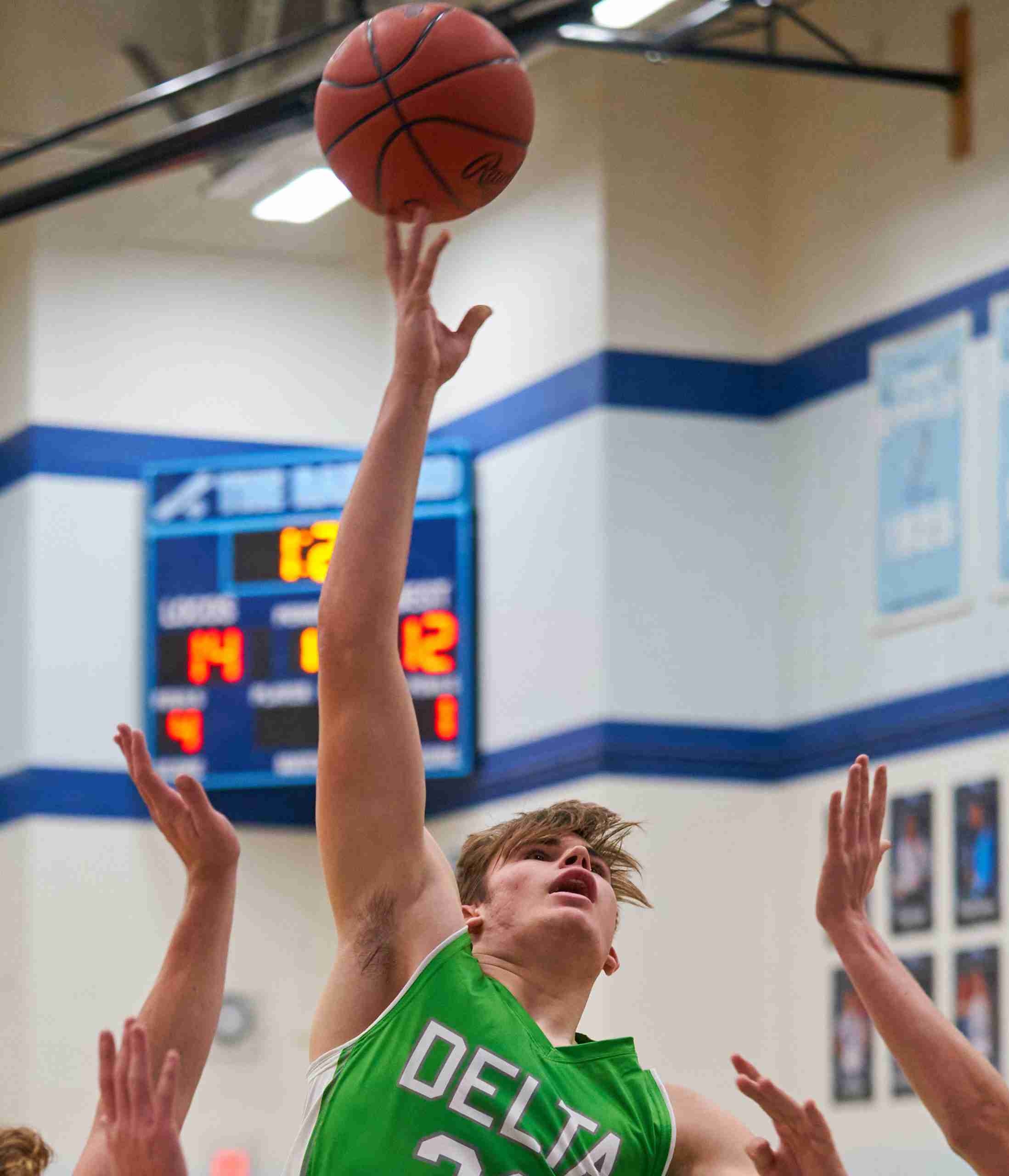 INSIDE PRESENCE … Josh Tresnan-Reighard scores inside for the Panthers in their win over Montpelier. (PHOTO BY RICH HARDING, STAFF)

MONTPELIER – The story of the first half was Montpelier’s prolific three-point shooting that helped them offset 13 turnovers and take a 26-25 lead at halftime.

Montpelier’s shooting cooled in the second half (5/18) while Delta was 10/19 as they pulled away for a 55-40 nonconference win at The Railyard.

The game started with Montpelier on fire from downtown as Garrett Walz hit three triples to give the Locos a 9-3 lead.

The Panthers responded by going on 9-2 run led by seven points from James Ruple to take their first lead of the day at 12-11 with 2:18 left in the first quarter.

After Montpelier regained the lead on a three ball from Trent Thorp, Josh Tresnan-Reighard and Justin Ruple had back-to-back buckets to give Delta a 16-14 lead after one quarter.

Nolan Risner opened the second quarter with a trey to extend the Delta lead to 19-14 before Drake Sommer and Walz hit consecutive three-pointers to put Montpelier back in front 20-19.

The Locos would knock down two more triples in the quarter as the half ended with the Locos clinging to a one-point lead. Montpelier finished the first half 9/14 from the floor with eight three-pointers.

Bryce Gillen’s three-pointer began what turned out to be a big third quarter for the Panthers to give them a 28-26 advantage.

Later in the quarter after another three by Gillen made it 33-29 and when Walz went to the bench with foul trouble for Montpelier, the Panthers started to pull away.

Gillen had a steal and layup followed by Tresnan-Reighbard with two buckets inside to cap off a 9-0 run by Delta to give the Panthers a 39-29 cushion.

Delta put the game away in the opening minutes of the final quarter as Gillen nailed another triple and after a three-point play from DJ Davis on a steal and layup, the lead was 49-34 with 5:04 left.

Montpelier ended the game 14/29 (48%) from the floor with 10 three-pointers and were guilty of 21 turnovers. Walz had 15 to top the Locos and Thorp added nine points with all their scoring coming from behind the arc.