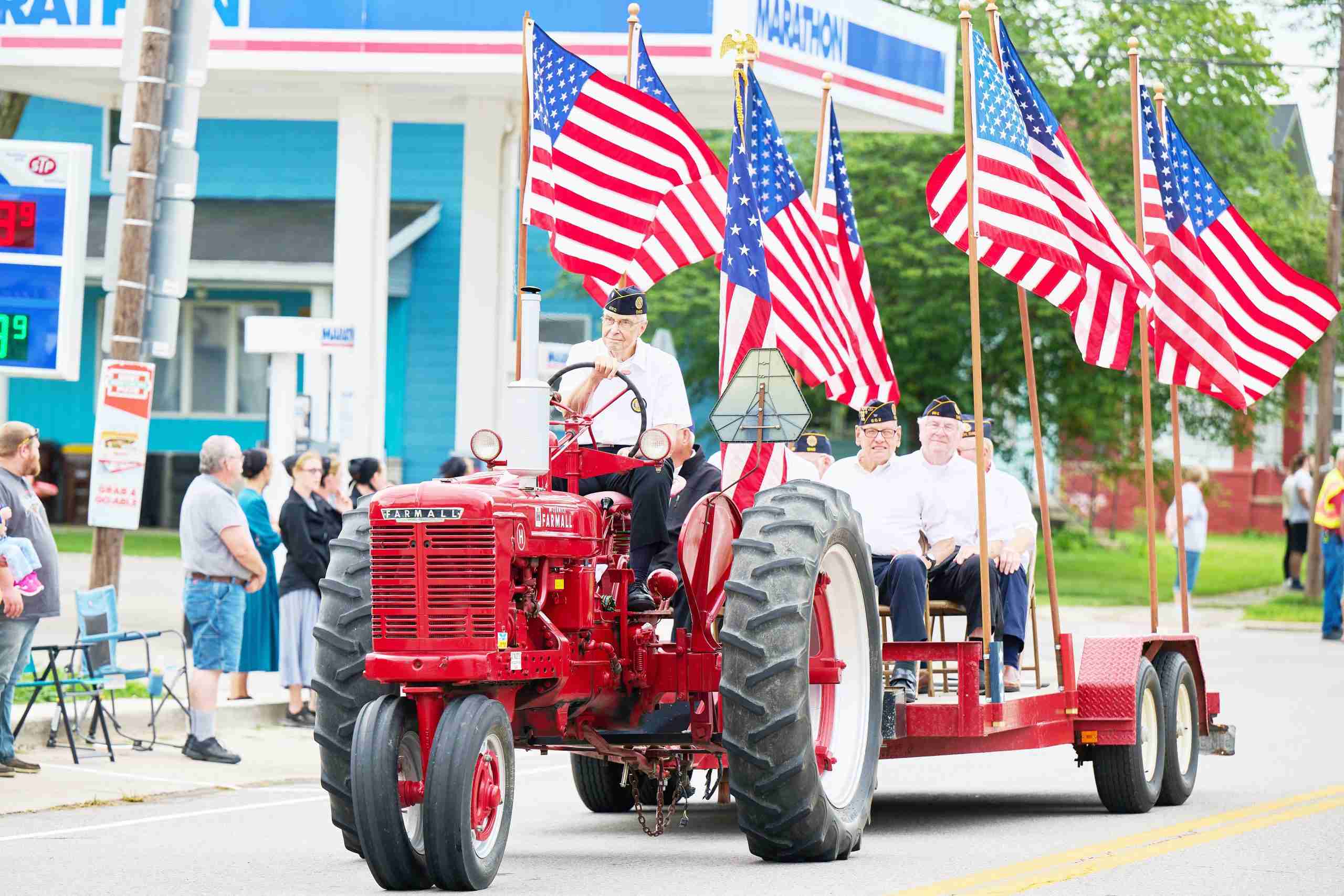 Saturday morning August 13, 2022, started with some showers, but for Edon the rain passed quickly and left gorgeous weather for the parade which started at 1:00.

Following the Edon Police Chief who led the parade, was a McCormick Farmall tractor hauling a wagon with two neat rows of veterans seated between a number of American flags on the sides of the wagon.

As they passed, the crowd all stood to their feet. The group stopped in front of the stage, and all stood for the national anthem, including the tractor driver who stood turned to face the center flag and saluted along with the others.

The national anthem was sung beautifully by the clear voice of Edon resident Monica Monachino. It was a most inspiring moment.

Emceed by Dr. Michael Miller, the chiropractor whose office Wellness Huddle has been in Edon for many years, the parade entries were announced, with some of them stopping to perform for the judges.

The parade, with the theme “Pride of Blue in 2022”, was well attended and many of the entries tossed candy to the children along the way. Buckets and bags were full by the end.

Just to name a few, other than the ones who won awards, the parade watchers were treated to music by the Edon HS Band and the Edgerton HS Band; waved to by the royalty from Edon, Montpelier, Edgerton, and Williams County Fair; heard loud horns and sirens from the Fire Departments of Florence Township, Springfield Township, Metz, NW Fire and Rescue, Edgerton, Montpelier and Pioneer; greeted Williams County EMS, horse riding sheriff’s deputies and Edon police.

Large dump trucks and semis represented area businesses, tractors pulled wagons loaded with Edon groups, and three of the ladies representing the Grand Marshall, Theta Kappa Sorority, smiled as they rode past in a lovely convertible.

Theta Kappa Sorority has been a part of Edon life since 1972, 50 years, and are very active in philanthropy for their town.

Representing them in the car were Pat Brigle, 50-year member; Marie Wolf, 45-year member and Dawn Wehrle a 42-year member.

They were driven by Jeff Schaffter, the husband of Jamie Schaffter who is an active sister with over 25 years in the sorority.

Besides the parade, Edon folks were treated to delicious foods for sale, vendors selling their wares, and free contained archery and BB gun shooting ranges.

Open to the public to wander in and take a look around, was Mudsock Glass and Artist Co-op with free pottery demonstrations going on. Edon Dairy Treat was extremely busy with long lines ready to enjoy one of their delicious treats on this special day.

Later in the evening, the parking lot of the old grocery store that now belongs to Wellness Huddle, was full of a car and bike cruise-in, food vendors, a beer wagon and live music.

Truck pulls were held at the firehall and many of those in attendance headed for the ballpark to watch some games.

The parade may have been a main event, but it was not all there was, with events on Friday evening, as well as the Fireman’s Breakfast on Saturday morning. All in all, it was a full and fun weekend. 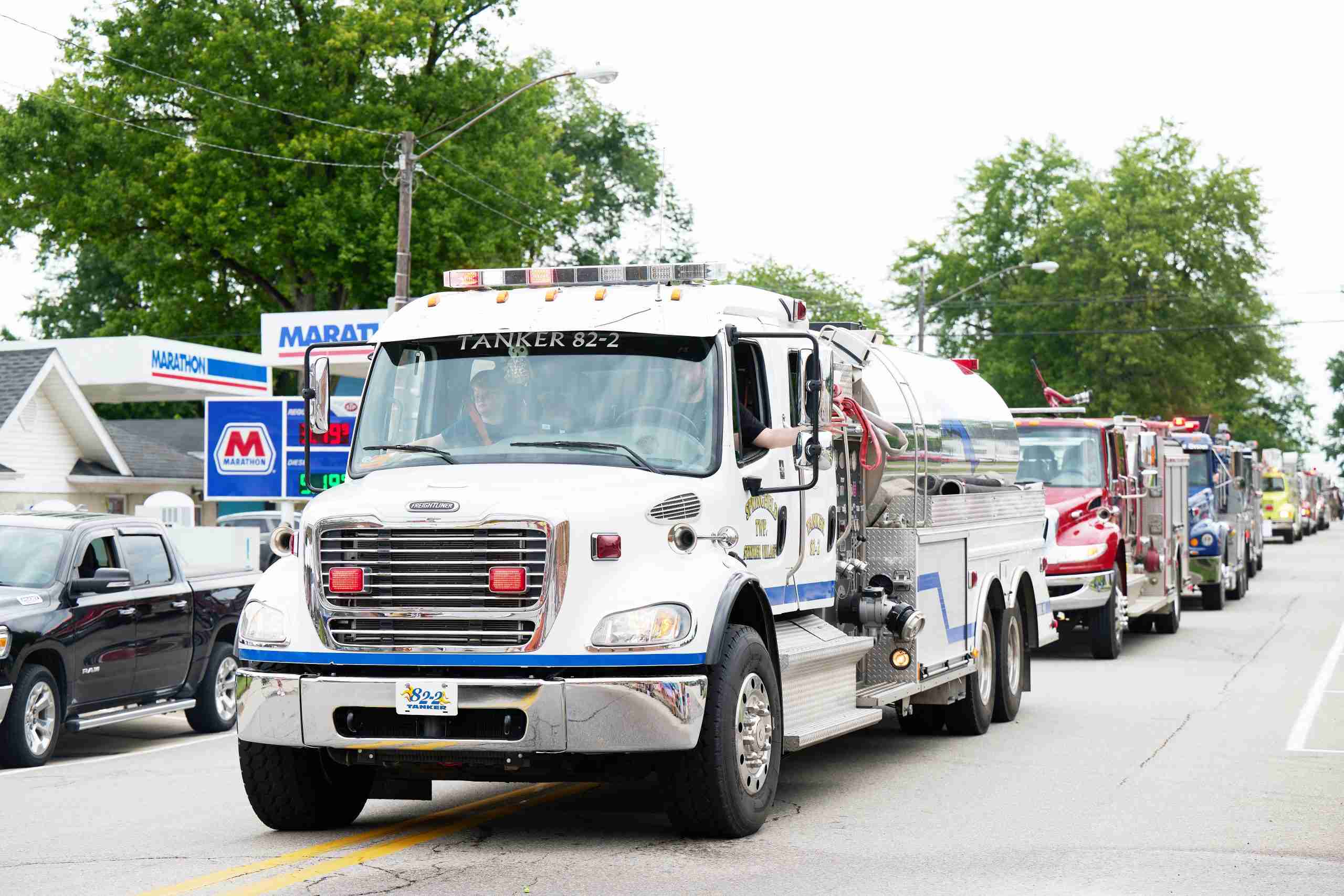 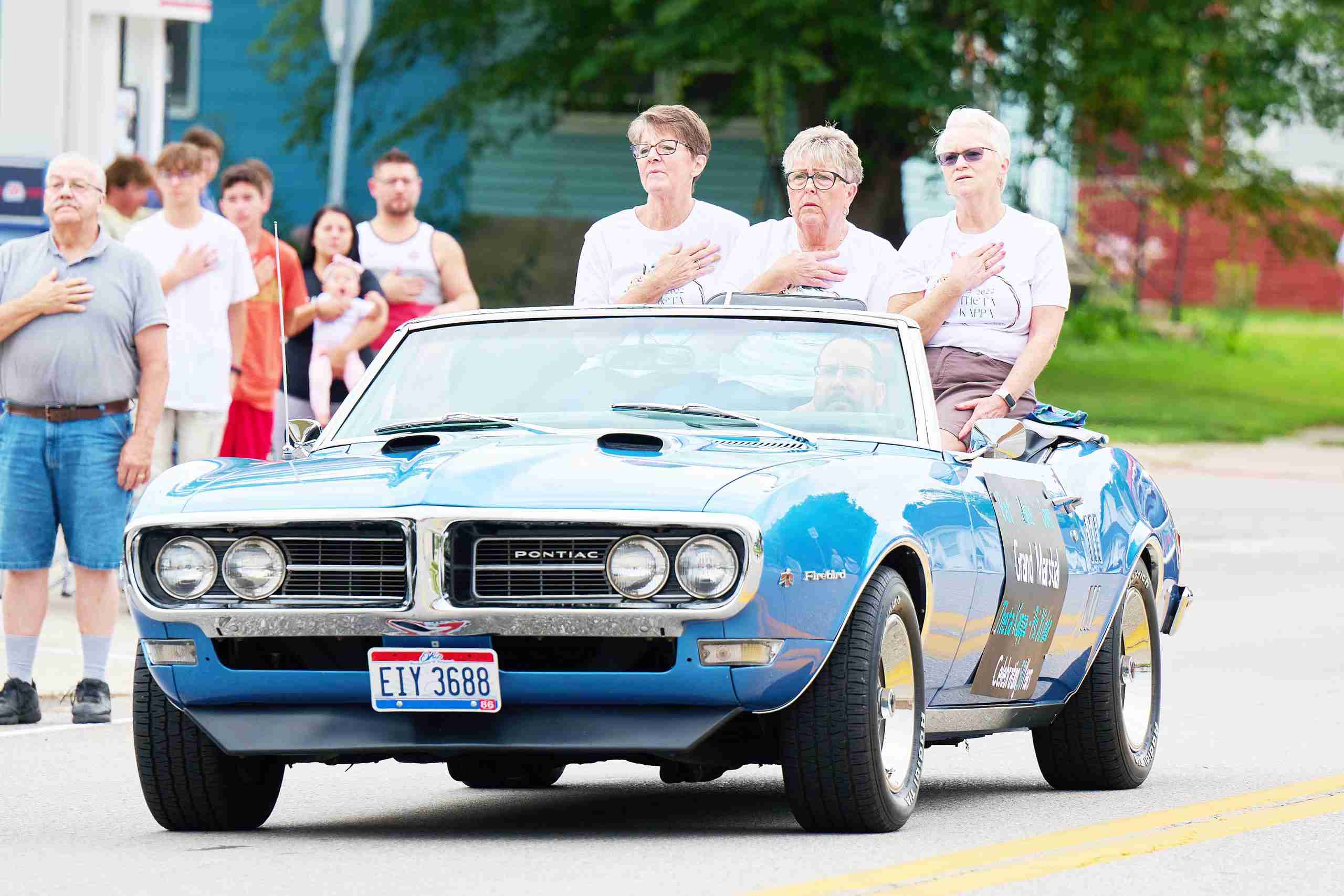 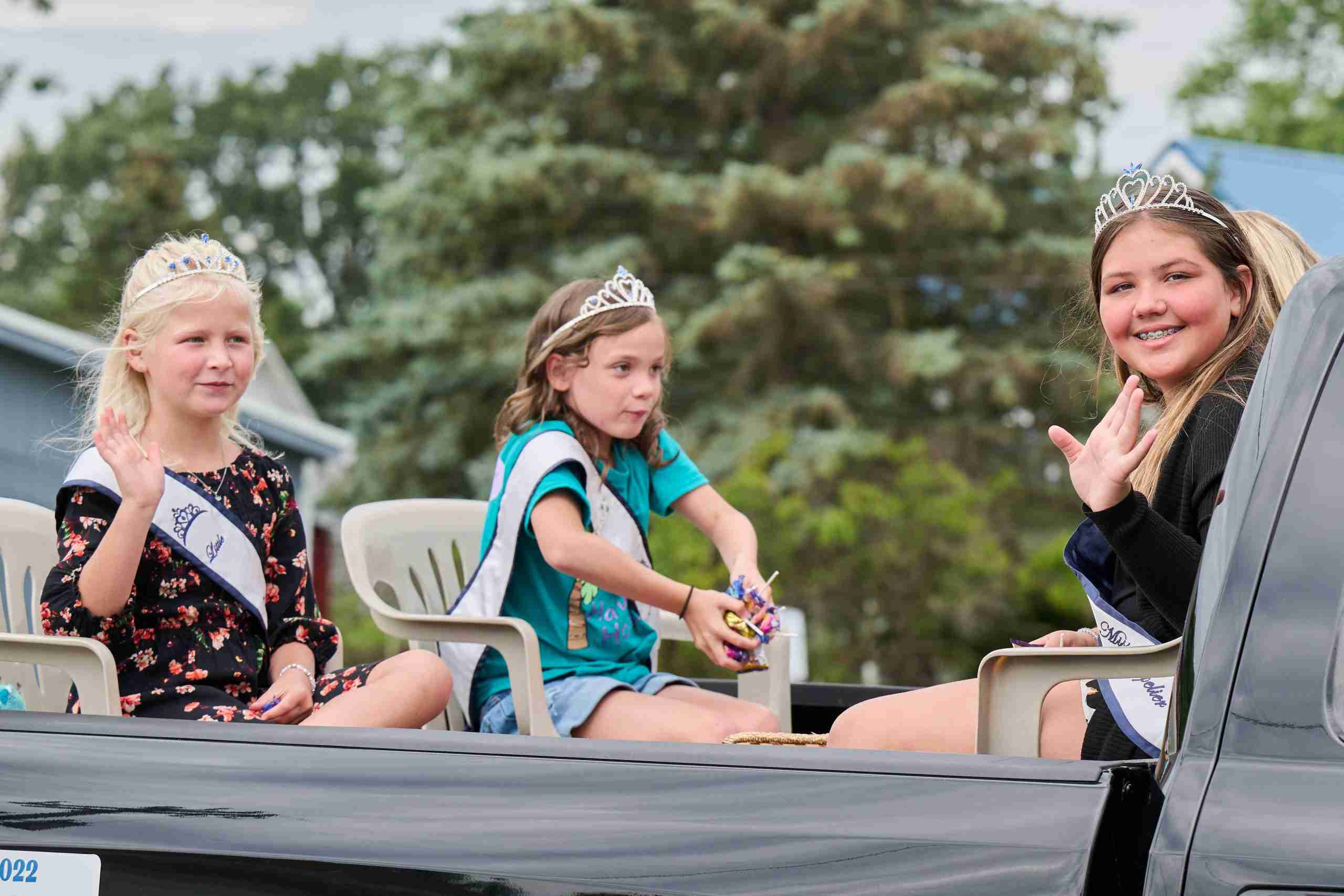 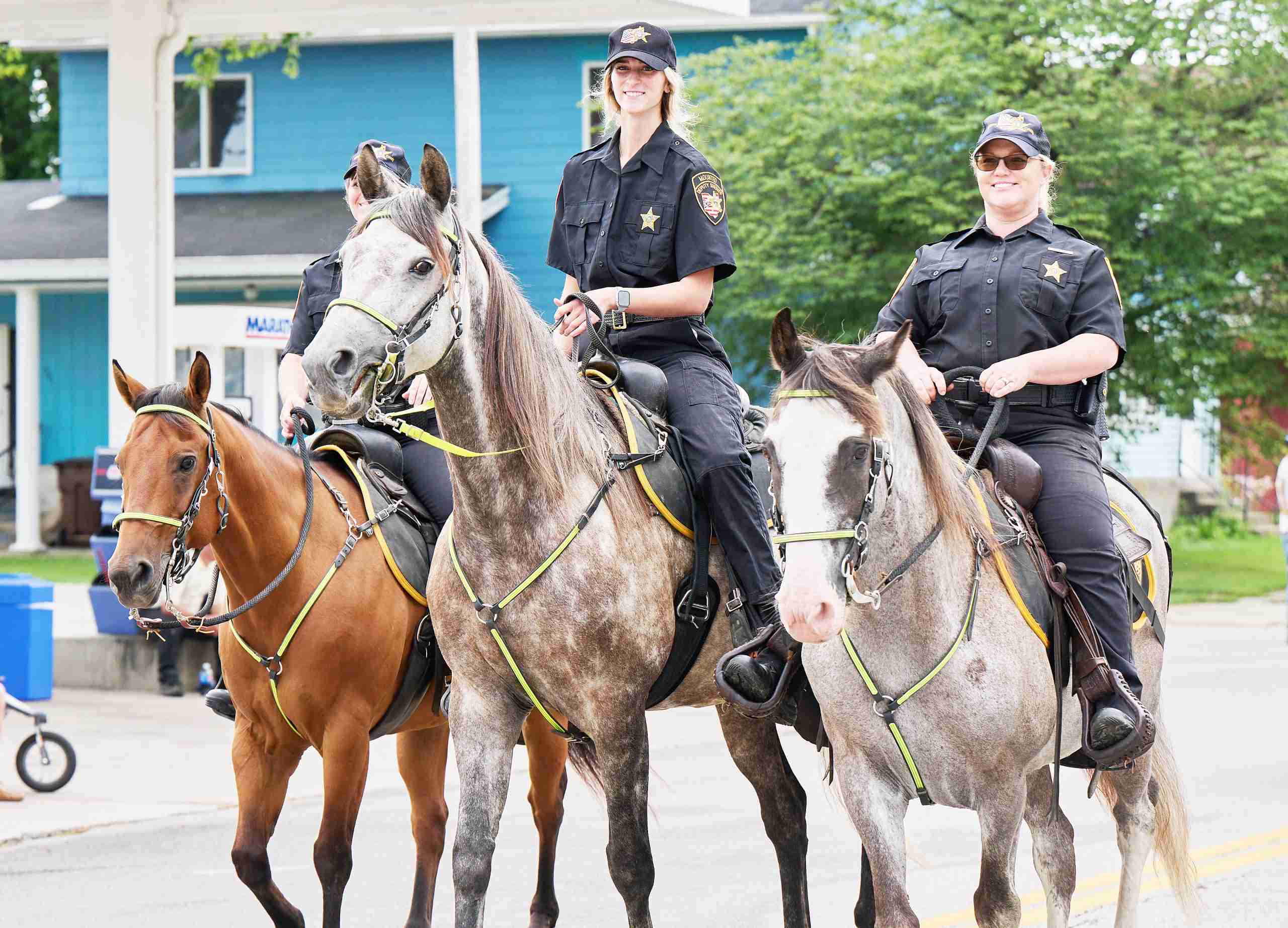