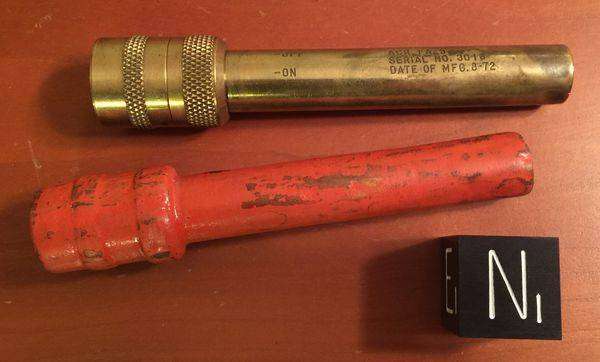 Everyone wants to leave a legacy behind with the work they do throughout their lives. Everyone wants to say they left a mark on the world to be remembered and talked about, a tiny piece of history they can claim as their own doing, their own passions made tangible.

It doesn’t matter how big or small the legacy is, so long as it’s there, carved out in its own little niche, just waiting to be discovered over and over again.

In 1968, Fulton Industries carved out such a legacy for themselves by producing 100 distinctive brass penlights under commission by ACR Electronics Company, which is still in operation today out of Fort. Lauderdale, Florida.

The Langley Research Center in Hampton Virginia contacted ACR Electronics, which is a subsidiary of Chromalloy American Corporation, which produces survival equipment for both the military and civilian usage.

ACR was approached by NASA to send durable flashlights for the upcoming Apollo 7 mission, which was scheduled to launch October 11th, 1968. In need of specialists, ACR sought out Fulton Industries in Wauseon.

Fulton Industries possessed the necessary equipment to produce 100 brass pieces, each labeled with a serial number from 0001 and onward, identifying them as the exclusive line which was ultimately delivered to NASA by ACR Electronics.

Of the hundred pieces constructed, eight individual penlights were delivered to ACR. Only two of those eight made the grueling trip to the moon itself.

One of these tough little lights was held by none other than Neil Armstrong as he took his first steps onto the dusty surface of the moon during Apollo 11. Given where they were slated to go, the lights had to be strong to survive the journey.

The lights were constructed with magnesium and powered by two AA batteries.

The light was switched on and off by turning the bulb casing to the left or right. They were such durable pieces of equipment that they stayed in the Apollo project all the way up to Apollo 13 launched on April 11th, 1970, where they became invaluable sources of light during the infamous power down event.

A letter of thanks sent to ACR by the astronauts following the safe landing of Apollo 13 mentioned that even though the lights were used extremely heavily during those tension-filled hours, they never once required a change of batteries.

Although the exact moon-and-back models are on display elsewhere, one of their hundred siblings is on display in the Fulton County Museum. According to sales manager Jim Bauman, people still come in hoping to purchase a brass model penlight.

Since only one hundred exist, they’re highly sought-after collector’s items, selling into the thousands on sites like Ebay. And sold as is, the lights are very often still in such good shape that they continue to light up even years later.

Having gained a reputation for developing durable, quality products, Fulton Industries now leads the market in supplying the government with military equipment, including high-grade plastic flashlights.

In fact, Fulton Industries claims to prestigious title as the only producer of plastic flashlights in the United States, giving them further credentials to add to their already extensive list.

Many aren’t aware of the significance of the company, even if they’d lived in Wauseon their entire lives. But coming down to the museum and bearing witness to this high exclusive family of flashlights with such historical significance may just shine a light on the importance of human ingenuity and the drive to continue learning, exploring, and innovating with each new step we take.