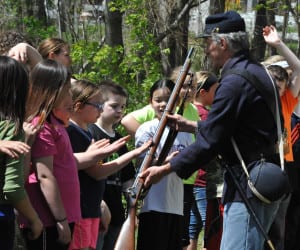 By: Timothy Kays
THE VILLAGE REPORTER

While the term ‘field trip’ always piques the attention of school kids, the concept of taking a field trip in a cemetery does not lend much to the thought of educational adventure. On the afternoon of May 1 however, several fifth and sixth grade students of the Fayette School not only went on a field trip to the Pleasant View Union Cemetery in Fayette. What they found awaiting them was a lesson in American Civil War history that paled anything that even the finest of textbooks could offer.

Awaiting them in full period garb was Union Colonel Henry Hayde, who along with Mr. Tom Spiess, Village Mayor Ruth Marlatt and other Civil War ‘living historians’ gave over fifty students a guided tour through a final resting place for several local citizens who participated in a conflict that would not just pit American against American, but often family member against family member, and brother versus brother. One of the more famous examples of this division was that of the family of Union General, Philip St. George Cooke. Often referred to as ‘The Father of the United States Cavalry’ because of his innovations in the field of horse cavalry operations and tactics, he was overshadowed by the man that in 1855 married his daughter, Flora…James Ewell Brown Stuart, more prominently known today as Confederate Cavalry General Jeb Stuart. Those who today complain about their in-laws probably never had to deal with a situation such as this.

This was not a walking tour taken by the students this day, per se. Colonel Hayde drilled his young charges in the protocol of military drill commands, marching and formations. As this was no doubt the first exposure by these students to such commands, Colonel Hayde showed great patience with the children, explaining how to do a proper turn when ordered to about face. There were also the occasional directional gaffes when ordered left face, but the Colonel gave the kids the opportunity to recognize and correct their own mistakes as they marched from station to station in the cemetery. By the end of the tour, the kids were becoming familiar with the instruction of Colonel Hayde, and his final order to wheel left was smartly executed.

Each station of the tour brought forth a subject of special meaning, reflecting both the battlefield, and the home front. The students heard everything from the horrors of war from a civilian, to a moment of joy from a mother as she read a letter from her son who was being released from a prisoner of war encampment.

At the final station, Mr. Spiess asked Colonel Hayde if he would demonstrate the proper firing technique of a British Enfield rifle. The Pattern 1853 Enfield was the most used rifle of the war, and it was a muzzle loader. Colonel Hayde demonstrated the loading and firing by first producing a cartridge, explaining its purpose as he put the charge down the barrel. He then pulled out and showed a percussion cap that was placed under the hammer. He advised the kids that they might want to cover their ears, then turned away from the group and fired. He reloaded and fired twice more, then brought the empty rifle around for all the kids to see. Some opted for a hands-on approach, which was welcomed by Colonel Hayde. One of the students commented on how hot the barrel had gotten. The Colonel replied that it had gotten that way after only three shots…imagine how hot the gun would be during an actual engagement that would have required them to be firing for hours.

Colonel Hayde of the Great Lakes Battalion is actually retired history teacher, Mr. Denny Whiting of Wauseon. He did not take the name of Henry Hayde by lark or accident. Mr. Whiting is a descendent of Hayde, who served in the Union army during the Civil War. Although retired from the profession, Mr. Whiting played the role of a teacher of living history on this day. “We’re looking to educate the students on part of the history of this area, particularly being at the cemetery here,” he said. “In school, they don’t spend much time covering the Civil War, basically because they don’t have the time. History being history, we’re well over 200 years as a country, and before that we were another 200 years as colonies. That’s a lot of history that schools have to cover. Teachers just don’t have a lot of time to spend on something of this nature, so we try to help teachers and these kids to understand this part of our history.”

A little less than a month ago, on the afternoon of April 9, at shortly before 4:00 p.m., a historical milestone was reached that many of you may have never realized. 150 years prior, at that date and time, in the first floor sitting room of the home of Mr. Wilmer McLain just outside of Appomattox, Virginia, Confederate General Robert E. Lee surrendered the Army of Northern Virginia to the Grand Army of the Republic under the Command of General Ulysses S. Grant, effectively ending the Civil War. The last remaining organized Confederate armies under General Joseph E. Johnson surrendered to Union General William Tecumseh Sherman 17 days later on April 26.

2015 is the sesquicentennial of the end of the Civil War, but in all honesty, how many of you knew that, or that between those dates, 150 years ago, John Wilkes Booth fired the shot that killed President Abraham Lincoln? The fifth and sixth grade students of the Fayette School, through a living lesson of the history of 150 years ago, gained more knowledge of our history than many of us currently have…all on a walk through a cemetery.