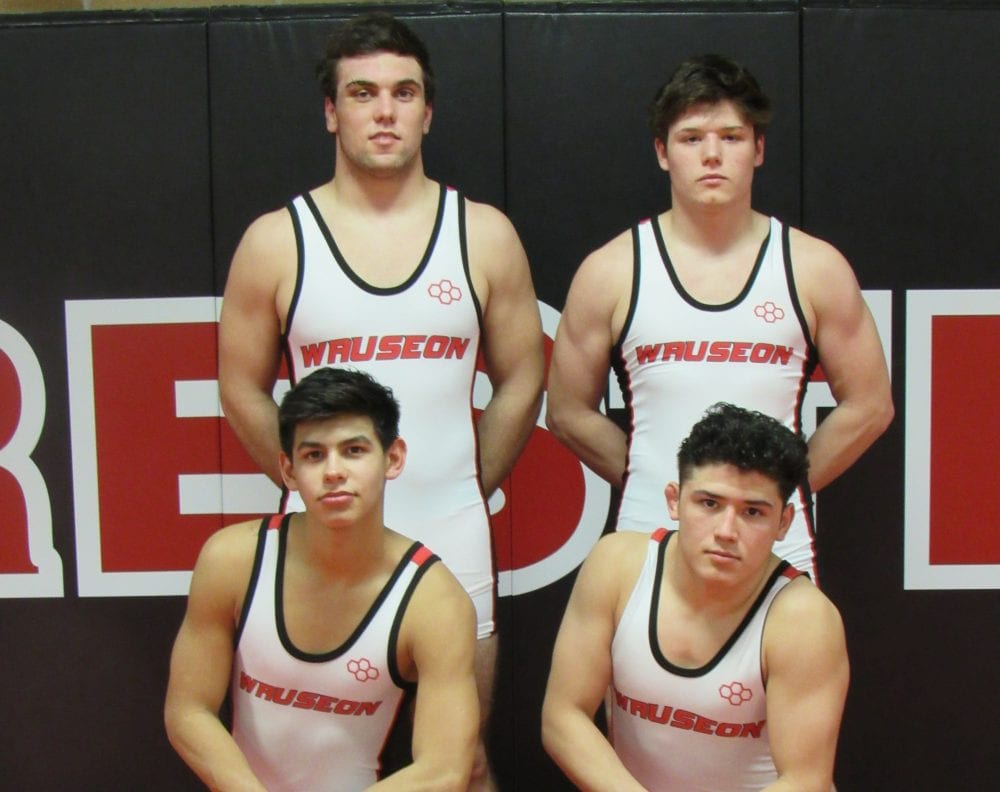 In thirteen years at the helm of the Wauseon wrestling program, coach Mike Ritter has once again helped to make the Indians a state power in division II.

After a terrific 2015-16 season that saw the Indians finish runner-up in the state duals tournament and sixth in the state team tournament, expectations were high that the current season could be something very special. For good reason, four of the team members, Tony Banister, Andrew Bailey, Hunter Yackee and Sandro Martinez have pinned and decisioned their way to over a combined 400 wins. Banister, who has made three straight trips to the state match finished second in the Division II tournament last year at the 195 lbs weight class. Bailey, the other senior is hoping to make his first trip to the Schottenstein Center this season. Ramirez, as a sophomore, was also a runner-up finisher at 145 lbs. Yackee, though not placing at state last season, did qualify at 132 lbs.

With the state experience from last season, the three are counting the days to get back to Columbus this season. “It all started for me in kindergarten with Ron Hodges at his wrestling club,” Tony Banister, who won his 100th match last season as a junior, said. “My dad (Chad Banister) never got his 100th win while wrestling. It is awesome to be part of a team that has four wrestlers that have achieved the century mark in wins.” Banister also spends many hours with his FFA organization. “We show pigs and goats all over the country so I am busy during the off season with all the travelling.” Banister continues in the sport of wrestling mostly because of the motivation to accomplish a state championship for his family and more specifically his dad. “Back in the day when he wrestled he qualified for state but was never able to make the podium,” Banister continued. “So now I am giving it my very best to win a state title and get a banner to hang from the rafters in our new wrestling room.” Banister’s name is displayed on a banner for his state runner-up performance from a year ago, but that banner would be forgotten if one could hang as a State Champion moniker. Banister also finished eighth in Columbus his sophomore year so his experiences at the state meet should work in his favor this season, first to qualify for the big meet, and second to come away with a gold medal around his neck. “The beginning of this season was a little rough for me trying to get back down to my wrestling weight of 195 lbs., because of the problems I lost to some guys at the beginning of the season that I probably should not have.” Banister said. “I found out really quick that wresters are going to be out to get me this year since I was second at state last season.” With the target on his back, Banister fought hard to get back to his 195 lbs. weight with the sole motivation being to gain that state title. Banister remembered his first trip to state during his sophomore season. “It was really nerve racking standing in the tunnel waiting to go out to the mats. All you see is lights and everyone is looking at you. I ended up winning my first match in overtime my first trip there. That enabled me to finish eighth in my weight class.” Banister has a whole different mindset for the upcoming state matches this season. “I have to go in there with a chip on my shoulder this year,” Banister said confidently. “I just have to go wrestle. I should be fine, I have dedicated myself to practicing twice a day and preparing to take on the best wrestlers the state has to offer.”

Another senior, Andrew Bailey, wrestling at 160 lbs also reached his milestone of 100 wins earlier this season. “It all started for me much like it did these other guys at Ron’s barn,” Bailey began. “I’ll never forget that building. Ron would always say ‘we are on vacation in here’ since it was always like 120 degrees in there.” Bailey played football through his junior high years but knew that his heart was with wrestling. “I really started to concentrate on the sport the summer before my freshman year,” Bailey said. Three seasons later, the senior captured his 100th win recently over winter break at the Brecksville Tournament. “It was a big achievement for me because I have been trying to follow in my brother’s footsteps (Dalton Nicely) and I know he was hoping I would get my 100th win. He is really coaching me up right now trying to get me to the Schottenstein on my final attempt.” There really was not one match that stuck out over the 100 wins for Bailey. “I was supposed to get my 100th win in my first match at Brecksville but I opened up with a three-time state champ who pinned me in the first period. I went out there as aggressive as I could but he was just a better wrestler than me.” So after the Brecksville tournament Bailey came back home and is working even harder sparring with Banister during practices to help improve his wrestling as well. “Wrestling with Tony has made me an even better wrestler. He is bigger and stronger than me, so when I wrestle other guys in my weight class I feel like I am wrestling a kid that is much lighter than me.” Bailey has used the sport of wrestling to teach him more than about wins and losses. “The sport has taught me to never give up, and I see that as a good lesson for life as well. Every day I come in here I just keep getting better, tougher, smarter and learning new things. Just trying to get to state would a huge achievement for me since I have never been there.” Bailey continued. “I have been trying to follow my brother’s shadow and be like him. He is a big part of my life right now. He is around a lot and trying to help me get better.”

Hunter Yackee, wrestling at 138 lbs. comes into his junior campaign coming off a disappointing state performance from a year ago, he already is striving for a different result this season after notching his 100th win earlier this season. “I got the win against Montpelier,” Yackee said. “It meant a lot to me because growing up I was always wrestling, either at Ron’s or going to tournaments. Yackee, who also stars on the football field as a two-way performer, indicated that he prefers wrestling for a very simple reason. “In wrestling it is just you and the other guy,” he said. “If you lose it is your fault and if you win it is all because of you.” Yackee has a pretty lofty goal of making it all the way to the state final this year. “My first two appearances in Columbus, I went two and out which was very disappointing for me,” Yackee explained. “I really am striving for the finals to make it up to everyone I let down for not placing either of the last two years. My freshman year I just got really nervous to be honest. Just being in front of the big crowd for the first time just got to me. Last season I just had a pretty tough draw going in. I wrestled the kid that wound up fourth in my first match. I knew I had to win that match to have a chance to place and it really devastated me and I really was out of it mentally after that loss.” This year Yackee is out to ‘impose his will’ on his opponents and show them that he is the better wrestler and gain some respect from around the state.

Sandro Ramirez entered his junior campaign coming off a state runner up finish at 145 lbs. His goals are similar to the other members of the century club. “I wanted to get the 100th win out of the way and did that at the Fricker’s Tournament last month in Defiance. Ramirez got his 100th win with a 30 second fall over a wrestler from Elmwood.” Ramirez has a goal to have the most wins in the history of Wauseon wrestling and by the looks of things he is well on his way with two more months of wrestling this year and all of the 2017-18 season. “The record is 178 wins; I could have probably got it this season but missed part of last season with an injury that set me back.” Ramirez is a true competitor who wants nothing to do with losing. “I love to win,” the junior state runner-up said. “There is nothing like being better than the guy in front of me.” Ramirez used that mindset to finish third in Columbus as a freshman and second as a sophomore so he is more than ready to make it to the top of the podium this season. “It has been a life long goal to be a state champion for sure.” Ramirez also has a long history in the sport at such a young age. “I started competitive wrestling at six years old for Otsego wrestling where Mike Reeves was my coach. I was winning state titles at the junior high level and competed in some national tournaments as well through those years and things were really clicking coming into my high school career. With that, a third place finish my freshman year was disappointing to me. Losing in the quarterfinals really upset me and fortunately my dad talked me into finishing the tournament.” So with the experience and after having sat out part of last season, Ramirez, with his internal drive, made it back to Columbus and advanced all the way to the championship match only to see his ultimate dream dashed. “A wrestler from St. Paris Graham beat me at state duals, I was ready to go in the state final but it really hurt me coming away with the runner up spot to him,” Ramirez said. “I was happy with the tournament but I was not satisfied as I have been waiting for a state championship a long time now.

Four true champions lead the Indians down the rest of the road under the tutelage of coach Ritter. The coach is thrilled to have the four 100 win wrestlers taking to the mats for his Indians. “They all have been around our wrestling program for along time,” Ritter said. “The reason they have the successes that they have is because they put a lot of hard work into their wrestling over the course of many years and during the course of their high school careers they have really put together a great effort in the practice room that has led to their success on the mat.” Ritter commended the four wrestlers for their high standard of conduct and character on and off the mat. “They bring the level of wrestling up for everyone around them. I could not be more proud of all four of them for accomplishments that they have had now and hopefully will have in the future.”

Bill Bray may  be reached at publisher@thevillagereporter.com