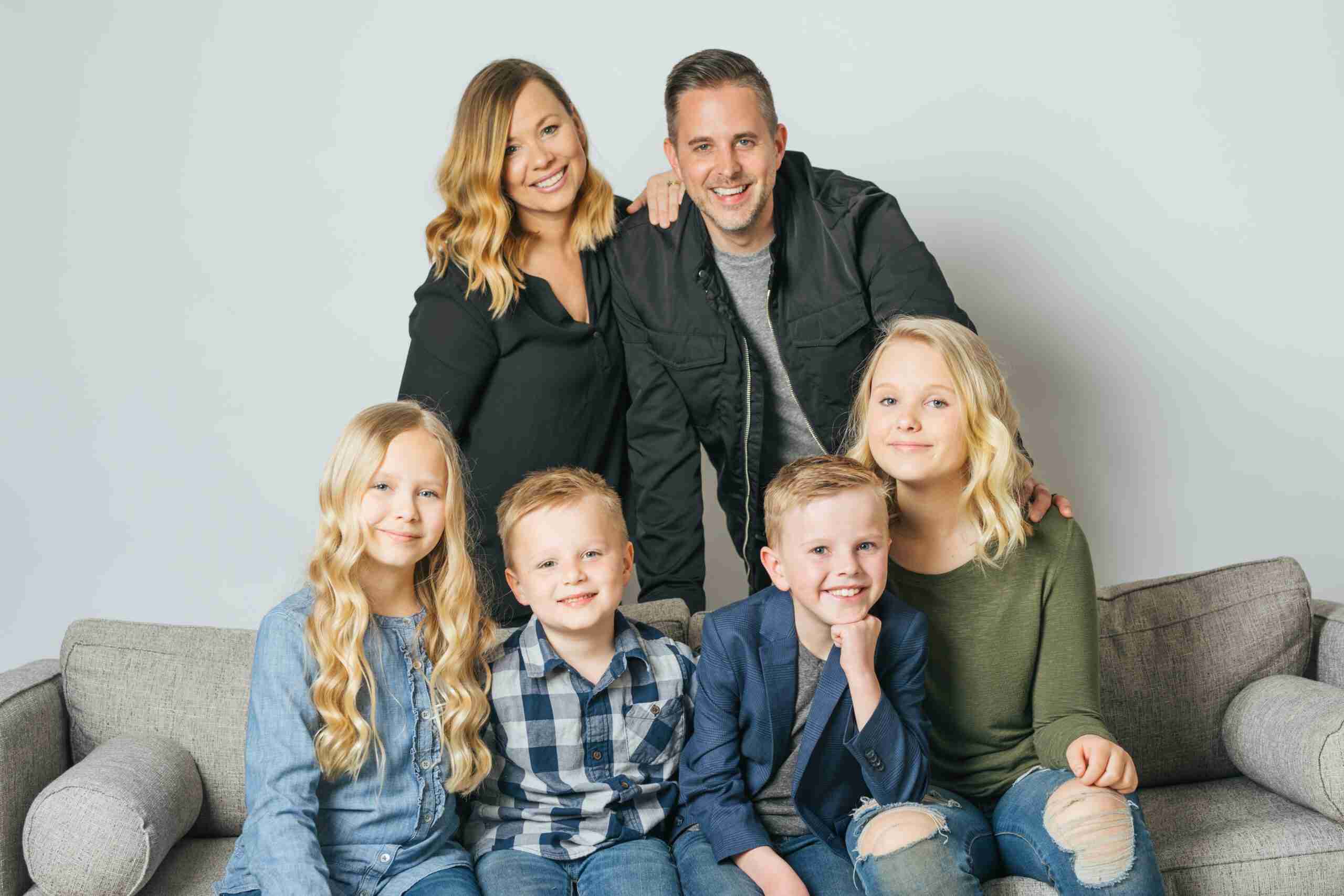 MATT HAMMITT IN CONCERT…The new Amphitheater in Bryan will host it’s first event on October 17, 2020. Seen here with his wife Sarah and their children Claire, Lewis, Bowen and Emmy, is Matt Hammitt, former lead singer of Sanctus Real, who will be presenting a solo concert that night. (PHOTO PROVIDED)

Bryan Mayor Carrie Schlade was excited to announce at the October 6, 2020 Bryan City Council meeting, that the first event being held at the brand new Amphitheater in Moore Park will be a concert on October 17, 2020.

The local group, Bryan Area Foundation 2020 Club, used their funds which were raised over a long period of time, to have the Fountain City Amphitheater built. Council members all thanked them for this addition to the community, expressing their hopes that it will be well and often used.

The Bard Manufacturing Company is sponsoring this concert as “a night of Worship and Song with Grammy nominated and Dove Award winning artist, Matt Hammitt.”

Pam Bard shared with The Village Reporter that over the past six months, she and her husband Bill “spent a lot of time discussing if there was anything we could do to try and bring a little normalcy back to our community during this COVID 19 crisis.

Those brainstorming sessions led us to a decision to sponsor the following event as a celebration of Bryan, and our surrounding communities, rising above the chaos we’ve all been going through during these unprecedented times.”  The concert, which is scheduled for 7 p.m. on the evening of October 17th, is free and open to the public.

Concerning the musician who will be sharing that night, quoting their website, “Matt Hammitt is an American singer, songwriter, speaker and author. For almost twenty years, Matt was the lead singer for the band Sanctus Real. During that time, the band released eight studio albums with Sparrow Records, toured internationally and released 14 top five and number one singles to Christian radio, earning them a household name amongst Christian music fans worldwide.

Matt has been the recipient of three Dove Awards, has been nominated for two Grammys for his work with Sanctus Real, and has received multiple awards from SESAC and ASCAP for radio chart performance. Matt has also co-written songs for other artists, including For King & Country, Francesca Battistelli, Jamie Grace, Newsong, Hawk Nelson, Moriah Peters, Jason Gray, Citizen Way and Love and the Outcome.

Matt and his wife, Sarah, have recently launched “Lead Me Live” organizing two-day conference and concert events with a focus on men, marriage, and family. Matt is also the host and producer of the audio program, “The Lead Me Lifecast,” which is available for free on iTunes. Matt has a passion for family life.

He married his wife, Sarah (who grew up in Perrysburg) in the summer of 2001. They enjoyed many adventures together, traveling with Sanctus Real for the first five years of their marriage, until Sarah left the road to become a stay at home mom in 2006.

Matt and Sarah have four children, Emmy, Claire, Bowen  and Lewis. In 2010, Bowen was diagnosed with a life-threatening heart defect at nineteen weeks in utero. His future was uncertain. Leading up to Bowen’s birth, Matt wrote his first solo album, Every Falling Tear. The album was released in September of 2011, carrying the theme of trusting God in the darkest seasons of life.

Matt also released a children’s book with co-author, Jason Ingram, based on a song from the album, titled “I Couldn’t Love You More” (Tyndale House Publishers). During the first six months of life, Bowen endured two open-heart surgeries, a stroke and cardiac arrest.

Finding new purpose through the pain of almost losing their son, Matt and Sarah started a blog called Bowen’s Heart (Bowensheart.com), drawing hundreds of thousands of readers. With the support of their friends and readers, they started Whole Hearts Foundation, a 501(c)(3) non-profit organization that provides financial, emotional and spiritual support for families of children living with pediatric heart disease.”

Matt is a Northwest Ohio native, born in 1979 and raised in Toledo. He attended Toledo Christian School and during his high school years, at the age of 16, he met Chris Rohman. The two of them “started jamming in the chapel band at school” and soon started hanging out making music in Chris’ basement.  That is where they formed their own band (the now well known group “Sanctus Real”) originally made up of Chris (guitar), Matt (lead singer and guitar), Mark Graalman (drummer) and Matt Kollar (Bass guitar).

Over the next twenty years, other members came and went, and sometimes they traveled as five and sometimes as four. With Hammitt leaving in 2016, “Sanctus Real” has continued as a group and is made up now of two original members Chris and Mark, and their new lead singer, Dustin Lolli, a worship leader from Michigan.

The way they came up with their group name is a fun story… Mark Graalman, came into the basement one day and said he had “found this word in the dictionary and it sounds like it means holy and praise.” They did not know “Sanctus” was latin so they always pronounced it the way it looked in English.

They also wanted their group to always be genuine, or “real” so they put it together and came up with “Sanctus Real”.  Hammitt said if you think about it, they have a “Latin word pronounced like an English word, with an English word that can be pronounced with a latin pronunciation.”

After graduating from Toledo Christian High School in 1998, the group began touring immediately and signed a record deal with Sparrow in 2001. When they were younger and just getting started, Sanctus Real often sang in Wauseon, as well as many other towns in Ohio and Michigan, gaining quite a name for themselves in the area.

Hammitt loves northwest Ohio and he and his family come back often to visit family. During this visit for his solo concert, they will enjoy time with their families in Toledo and Perrysburg as well as fitting in a vacation in Michigan.

Hammitt, who has become known to many as “the guy who sang Lead Me”, shares his reasons for leaving the group in a six minute video online, entitled My Story, which was recorded a year ago.

Around seven years into their marriage, his wife went to him and pleaded with him to be a better father and husband. He said, “By the grace of God I heard her voice…and I knew that something needed to change.”

As he was thinking about what she had said he wrote the song “Lead Me”, which is a call for husbands and fathers to step up and be there.  Unfortunately, as it went to the top of the charts, he was actually home less and less.

He realized at that point that “It was time for me to make a decision to be able to actually step out of Sanctus Real and step into a new season that was a complete mystery to me.” He bought an RV and took his family out on the road together for a year, not just to minister to others, but to get connected and “rediscover one another.”

“I am grateful for the gift God has given me now to have a healthy and thriving marriage and family, and to be able to share that with others,” he said in the video. “I am on a mission to use words and music to appeal to people’s hearts to help them see where God is in the midst of real life struggles.”

Now he speaks and sings at retreats and in February 2020 his book Lead Me was published by Multnomah Press. They just finished a documentary that was featured at the Nashville Film Festival that took place from October 1-7, 2020. It was selected as one of 200 movies that were chosen out of 9000 submissions from around the world.  They are working on distribution, aiming for release in 2021.

Also, his brand new solo album, “Treetop”, just came out on September 25, 2000. It is streaming everywhere that you can listen to music and he will be performing the new single “Try” at the October 17, 2020 concert in Bryan.

Those who get to attend the concert are in for a treat as his whole family will be there with him and their son Bowen, who is now 10 years old, will be singing with his dad! Make plans to be there. Fountain City Amphitheater is located at Moore Park, 1017 Oakwood Avenue, Bryan, Ohio. The amphitheater is located next to Imagination Station in Moore Park.

People can park in the Imagination Station parking lot, the Mohre Pool parking lot, the Presbyterian church parking lot that is across the street as well as the general parking within the park itself by the baseball fields. There are no seats.

It is festival seating which means bring your own chair and/or blanket. The stage is elevated and they are planning on everyone social distancing while they enjoy the concert. It looks like a chilly evening so plan on bringing a chair and blanket.