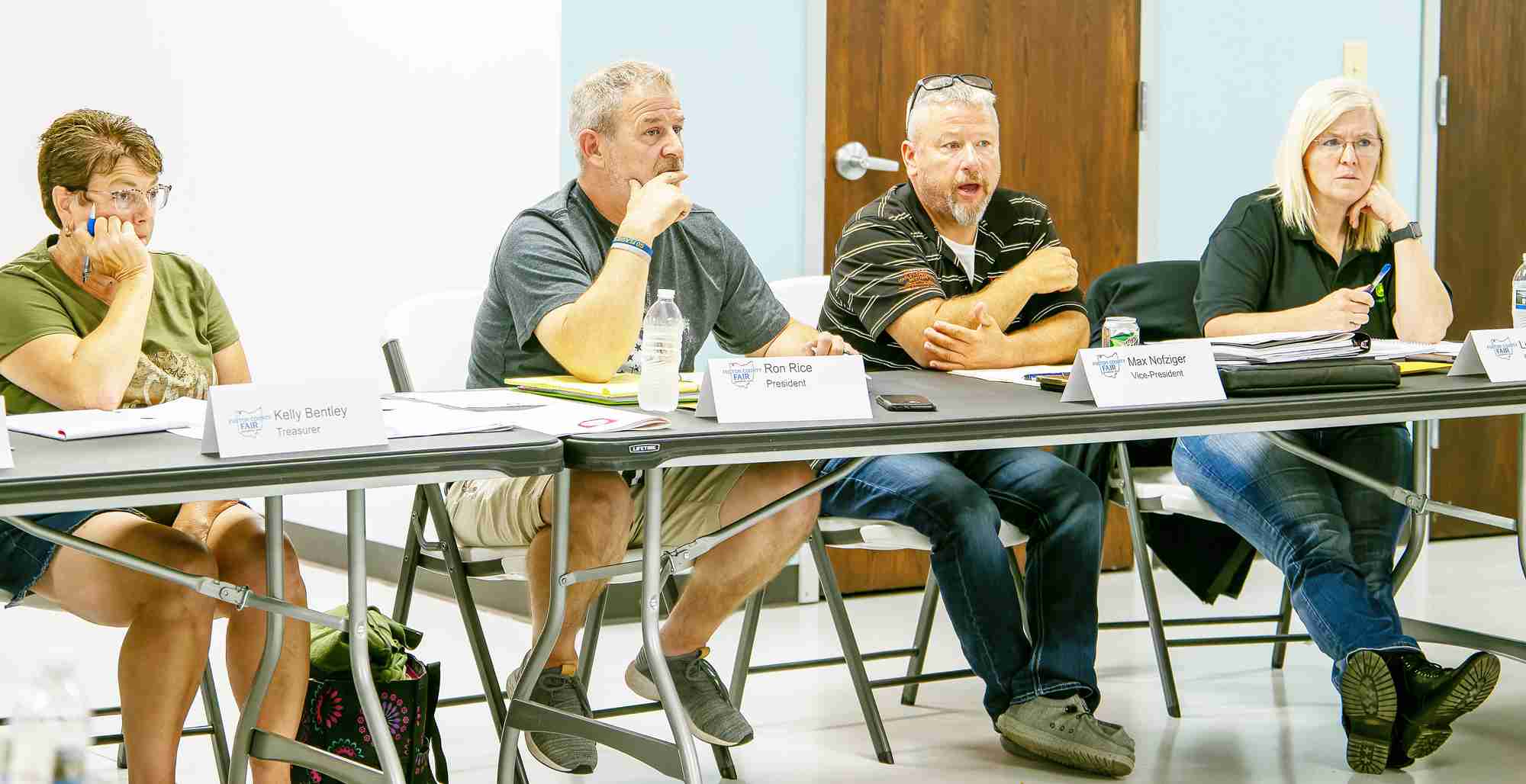 FAIR BOARD … Members of the Fulton County Fair Board discuss the topic of putting privacy screening on the fencing that runs around the grandstands. (PHOTO BY JACOB KESSLER, STAFF)

The Fulton County Fair Board held their meeting on Thursday, August 4th. The meeting began at 7:00 p.m. with the introduction of guests.

A representative from Stapleton Insurance gave an update to board members regarding their insurance renewal. Special guests were recognized next with Wauseon Fire Chief Phil Kessler speaking first.

An update regarding fire prevention at the fair was discussed with Chief Kessler explaining that the chiefs in the county are working together to make sure each day is staffed.

Fulton County Sheriff Deputy Major Matt Smithmyer spoke next about staffing for the fair. Major Smithmyer stated that staffing looks good and asked the board how many deputies would be needed for each event.

The board stated that they would be able to discuss this in more detail soon. Major Smithmyer also informed them that counterfeit bills having been making the rounds lately and that they should be watching out for those.

The rest of the visitors were then introduced before the board moved to accept the minutes from the previous meeting.

First on the agenda was the issue of master keys. The locks around the fair have been changed which means there is a new master. Board members were also instructed to not give out their master keys.

The treasurer’s report followed after. The meeting then continued with a discussion taking place regarding an increase in pavement costs due to a slope needing to be take care of.

The board then discussed obtaining a generator for the fair office building, and the length of time that trailers are staying onsite after events.

The issue of plumbing was discussed next with the option to have Free and Sons on site for emergencies at a cost of $1,500 being tabled.

In old business, the board moved to approve the sealing of asphalt at certain areas on the grounds. The meeting then proceeded to the round table portion.

It was stated that the issue of people drinking alcohol at the fair has been discussed with the Sheriff’s Office.

Golf cart prices have increased for this year. In order to obtain the amount of golf carts needed the cost will be $18,306 which is $11,000 more than the previous year. Other companies were also quoted but are more expensive.

Board members also proceeded to thank the auxiliary members for their hard work and dedication. The Marketing Manager then spoke about advertisements for the fair this year.

It was stated that this option was presented in order to continue relationships but that these were lower priorities due to them not meeting their target demographic. The board moved to approve the higher priority options.

Lastly, the board discussed having seconds involved more in case something was to happen. This would allow for a smoother transition.

With no further business to discuss, the meeting was adjourned at 8:40 p.m.