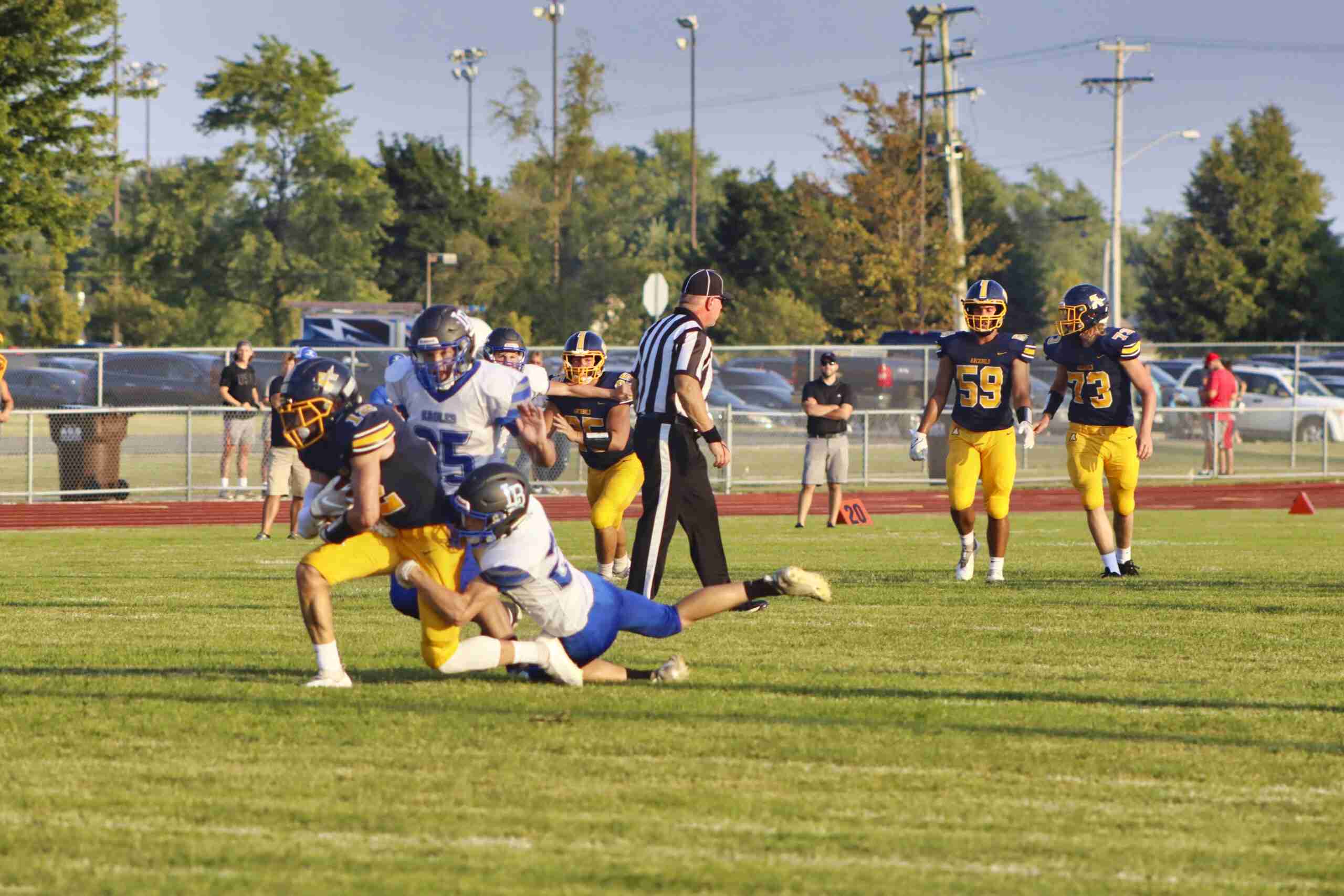 FIGHTING FOR YARDS … Wide receiver Chase Miller is tackled from behind after a first half reception. (PHOTO BY JACOB KESSLER, STAFF)

ARCHBOLD – Senior quarterback DJ Newman put on a show by running for five touchdowns and throwing for another as Bluestreaks rolled to a 44-14 win over Liberty Benton.

Archbold scored twice in the final five minutes of the first quarter as Newman ran seven yards for a score and then fired a 20-yard TD pass to Gavin Bailey to give the Streaks a 14-0 lead.

Newman tallied his second rushing touchdown of the night on a 13-yard run with 5:01 left in the first half to increase the lead to 21-0.

Liberty-Benton got on the board with a score just before halftime, but the second half opened with a 61-yard run for a touchdown by Newman to make it 28-7.

After the Eagles closed the deficit to 28-14, Newman had a three-yard TD run in the third and then registered his final score of the night, a 56-yard scoring run early in the fourth to push the lead to 41-14.

The Bluestreaks rolled up 496 yards of total offense while the defense limited the Eagles (1-1) to 276 yards of offense and forced two turnovers.

UP NEXT: Archbold (2-0) will be back on the road next week as they head to Lake.

MONTPELIER – A balanced offensive attack from the Vikings lifted them to a 44-12 win against former NWOAL foe Montpelier.

Evergreen rushed for 129 yards on the night and passed for another 194 as quarterback Payton Boucher was 11/17 passing with three touchdowns.

Boucher threw for two scores and rushed for another in the first half to help Evergreen build a 21-6 lead at halftime.

Riley Dunbar started the third quarter scoring with a 62-yard punt return for a touchdown to increase the lead to 28-6 as the Vikings began to pull away.

Dunbar topped Evergreen in receiving yardage as he totaled 88 yards on two catches and Conner Hewson led the way in rushing with 94 yards on four attempts.

Montpelier was paced by Jacob Lamontagne with 152 yards on the ground and a pair of touchdowns.

MAUMEE – Bryan’s Korbin Shepherd ran wild as he carried the ball 30 times for 212 yards and tied a school record with six touchdowns to lead the Golden Bears past Maumee 49-0.

Bryan took control early with Shepherd scoring on runs of one and two yards in the first quarter and then scoring three times in the second quarter on carries of 11, 3, and 11 yards.

Jase Kepler was efficient at quarterback for Bryan by going 6/9 passing for 114 yards, including a 33-yard TD toss to Trenton Wolfe in the opening quarter.

SWANTON- The Bulldogs grabbed an early 13-3 lead, but Ottawa Hills (1-1) was able to score the last 21 points of the game to pull out the road win. No stats were reported.

UP NEXT: Swanton (0-2) will look to get in the win column when they host Toledo Rogers next week.

Edgerton, who added two more rushing touchdowns in the second half, totaled 224 yards on the ground led by Nichols with 72 yards on 11 carries and Quentin Blue had 11 carries for 64 yards.

Everetts went 9/14 thru the air for 155 yards and a score with Herman hauling in four catches for 83 yards. Andyn Haynes had 27 yards rushing on nine carries to top the Hilltop offense.

OREGON – Delta got 280 yards from their running game and a defensive touchdown in a 42-0 win over Cardinal Stritch at Clay High School.

Jerremiah Wolford started the scoring with a one-yard touchdown run in the first quarter followed by a fumble return of 35 yards for a score by Caleb Lantz to grab a 14-0 lead.

Delta continued to pour it on in the second quarter with a three-yard touchdown run by Bryar Knapp, Josh Tresnan-Reighard found the end zone on a 37-yard scamper, and James Ruple scored from a yard out to make it 35-0 at halftime.

Tresnan-Reighard ended the game with 112 yards on 12 attempts while Knapp rushed seven times for 75 yards.

UP NEXT: Delta (1-1) returns to Panther Stadium next week to host the Paulding Panthers (0-2).

Be the first to comment on "High School Football Roundup For August 27th, 2021"