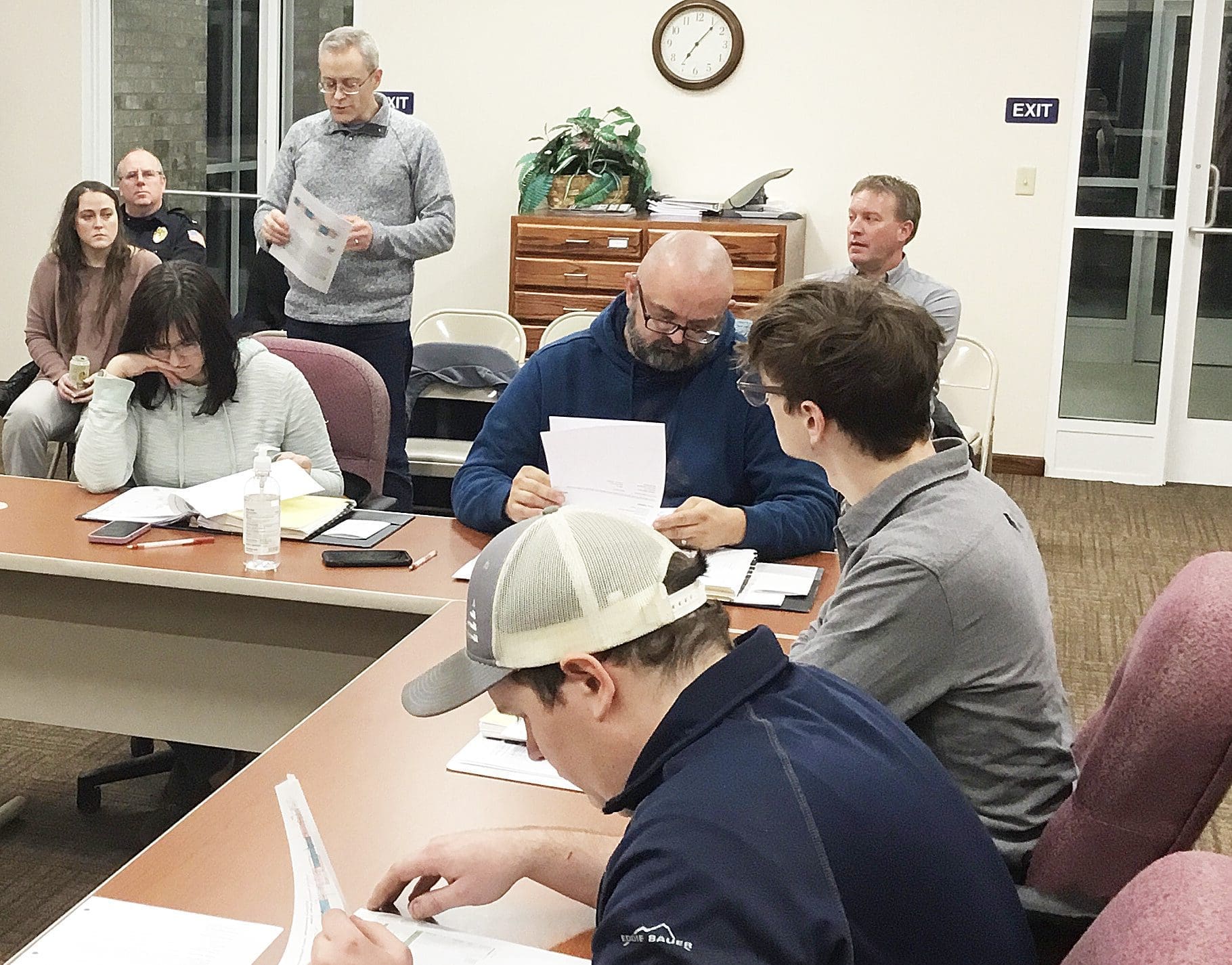 COOPERATION … Montpelier councilors attended the Holiday City Village Council meeting, with Chris Kannel sharing information about the Wabash Cannonball Trail and NORTA’s hopes to have an Engineering Study done for improvements. Council voted to donate $5,000 toward the study and said they hope that Holiday City will eventually be connected to the trails, which makes them stakeholders. Seen behind Kannel are Montpelier Councilor Heather Freese and Lt. Darrel Higby. Beside him is Montpelier councilor Nathan Thompson and at the table are Holiday City Councilors Beau Zuver, Cooper Clark and Jarrett Funk. (PHOTO BY REBECCA MILLER, STAFF)

After roll call, with only one member (Jodie Faunce) absent at the Holiday City Village Council meeting on December 15, 2022, Mayor Pam Clark skipped to the end of the agenda to ask a few visitors who wanted to address council, to go first.

Nathan Thompson, Heather Freese and Chris Kannel were present, to share their hopes for a change for a section of the Wabash Cannonball Trail.

Kannel, as the spokesperson, shared a few maps with each member and then proceeded to share about a number of trails in the Montpelier area.

Recently it was determined that there is a section of the Wabash Cannonball Trail that NORTA (Northwest Ohio Rails to Trails) would like to get paved to make it more accessible for everyone, as the trails are done further north of this area.

There are 66 miles of trail with portions of it paved, and they see it as an economic development opportunity.

“As people travel to use these trails, this is a benefit for not only Montpelier but for Holiday City as well,” he said, sharing that they hope in the future to connect the Ironhorse River Trail, which is a smaller trail within Montpelier,  to Holiday City by going north on County Road 13 to County Road M-50 and “into the heart of Holiday City.”

The section that they wish to pave is from Williams County Road 13 to the Fulton County line.

It is a ten mile stretch with four miles in Montpelier and six miles in the county. Kannel explained that in order to do so, they first need to have an engineering study completed to let them know the cost of doing this project.

He stated that the reason they were at the meeting was to ask if Holiday City would like to make a donation to assist in paying for this study.

The group has already accepted two donations in the amount of $5,000 each from the Village of Montpelier and a Family Foundation.

After sharing their plan to ask other villages and groups for matching funds, they asked if Holiday City would like to help also to fund this project.

He said they are asking “stakeholders” for funding, and it will cover the amount of $45,470 which Poggemeyer has estimated it will cost.

He will be approaching the Visitors Bureau, the Bryan Area, Montpelier Area and West Unity Millcreek Foundations, as well as all the area villages who will be affected by the trails.

Clark said that it is good community involvement and Thompson agreed, stating, “Yes, we like that idea and it will help with our grant applications also as the more people that are invested in it shows that it is a worthwhile endeavor.”

There were a few clarifying questions and then councilor Cooper Clark made a motion, seconded by councilor Jarret Funk, to donate $5,000 for the engineering study to be done on this specific section of the Wabash Cannonball Trail in the county.

Kannel thanked them and said, “In a rural community like ours, if we can all share the load, then we can really make progress.”

Clark went next to the Safety Committee and Police Lt. Darrel Higby said that he still is concerned about the semis that are parking alongside the road in places that are very dangerous.

Following a lengthy discussion with a number of possible solutions raised, they still had no solution for the situation.

During that discussion when they were trying to determine where semis could park, they spoke about an area that has a great deal of “junk and trash” piling up and is also not keeping the village ordinances concerning the height of weeds.

Attorney Cara Wall will be drawing up a letter for Village Administrator Blair Campbell to sign and have delivered to the owners letting them know it all needs to be removed and cleaned up.

In the fiscal officer’s report, Rupp shared that the village had received a letter from a group asking if they are interested in selling the property, that they are presently hoping to develop, for a solar garden to be placed.

After passing the letter around, council asked Rupp to file it as they are not interested in that possibility.

Mayor Clark reported that she had attended a OneOhio meeting where for two hours they hammered out the details of establishing the bylaws. There will be a meeting of the Audit Committee in February.

Administrator Campbell reported that the pole line for 20/20 is progressing well; on January 14 there will be a ten-hour outage for portions of 20/20; AMP met with him; parts have been ordered for the siren; one of the signs out front is completed and the other will be soon.

He also requested to be able to purchase the posts to keep the substation from being hit by vehicles, for between $2000 and $2500. Council all gave it the nod.

Mayor Clark informed council that Jeff Simons, the gentleman who used to do the landscaping for them at the village hall, has passed away.

There were many kind comments for what a great job he did and how much they have missed his talented touch on the greenery.

As they wrapped up the final meeting of 2022, the council, mayor, and staff all thanked the newest council members, Cooper Clark and Beau Zuver, who are both very young, for not only stepping up to fill the empty council seats, but for “being engaged.”