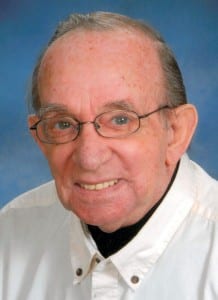 Jim was a graduate of Gorham Fayette High School Class of 1956. After high school he proudly served his country as a member of the United States Army. He and Rita owned and operated Borton’s Clothing in downtown Fayette for many years. Jim also worked at Fayette Tubular Products, Polycraft in Wauseon, and later retired from Sauder Manufacturing in Archbold.
Jim was active in his community, serving for many years on the Gorham-Fayette Volunteer Fire Department, the Fayette Park Board, and he founded the annual Fayette Marathon Softball Tournament. He enjoyed all types of sports, most notably NASCAR and softball, and was an avid Ohio State fan. Jim was a member of St. James Lutheran Church.
Surviving Jim are two sons, Michael Borton of Morenci, MI, and Eric Borton of Wauseon, OH; three daughters, Gale Borton of Wauseon, Christy (Jeff) Keller of Statesville, NC, and Renae (Bill) Stoiber of Ledyard, CT; a brother, Roger (Pat) Borton of Fayette; two sisters, Phyllis (Herb) Simon of Tecumseh, MI, and Brenda Humbert of Fayette; eleven grandchildren; five great-grandchildren; and his beloved canine companion, Harmony.
In addition to his wife, Rita, he was preceded in death by his parents, and a brother-in-law, Bill Humbert.
In accordance with Jim’s wishes, cremation has taken place. A memorial service for Jim Borton will be held Thursday, February 28, 2013, at 1:00 p.m. at St. James Lutheran Church in Burlington with Pastor James Strawn officiating. Interment of his cremated remains will follow at St. James Lutheran Church near Archbold, with military rites conducted by the Fulton County Honor Guard. The family will receive friends for a visitation on Wednesday afternoon, from 4-8 p.m. at the Eagle Funeral Home-Barrett Chapel in Fayette.
By request of the family, those planning an expression of sympathy may direct memorial donations in honor of Jim to the Fayette Fire Department.
Friends can share memories and send condolences to Jim’s family online at www.eaglefuneralhomes.com.