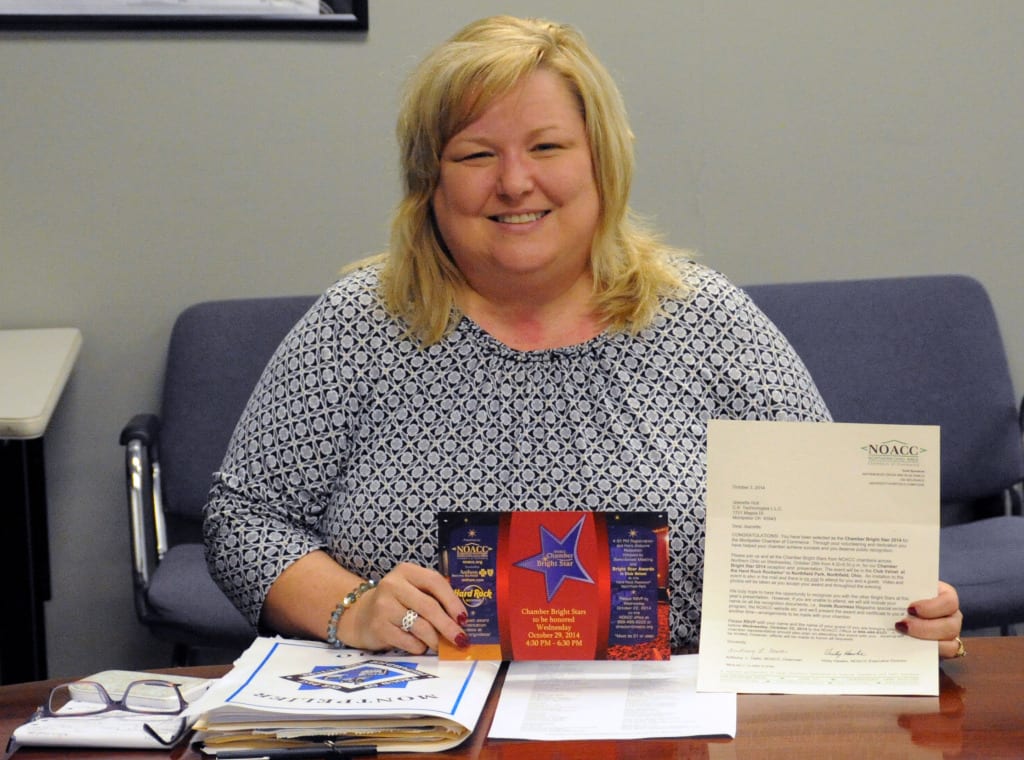 There’s a bright star shining from within the Montpelier Chamber of Commerce.

A proud employee at C.K. Technologies of Montpelier, Hull is now serving as the President of the Montpelier Chamber. It was her actions as President that led Chamber Executive Director Terry Buntain to nominate her for the award. Hull suspects one particular aspect of her tenure with the Chamber that motivated her nomination.

“I think it might have a lot to do with The Balloon Festival.” Theorized Hull.

Hull was instrumental in the popularity of this year’s Bean Days festivities, playing a large role in the air-balloon themed event. Actually, it was the Balloon Festival that propelled Hull into a more active role within the Chamber. One factor to which she attributes the celebration’s success was the ability of the Chamber to bring in sponsors not only from Montpelier, but beyond as well.

“There were a lot of sponsors from outside of Montpelier.” Hull announced. “We couldn’t have done it without the communities of Williams County.”

That level of modesty has served Hull well during her time as Chamber President, and is a quality that surely helped to make her one of the Bright Stars of the Northern Ohio Chambers.

One humble act taken by the Chamber in which Hull takes pride is the returning of Pocket Park back to the Montpelier public.

“I think we did the right thing donating (the park) back to the village.”

The Chamber received the property from a private owner before deciding to give it back to Montpelier residents.

That’s not to say the Chamber hasn’t had its fair share of issues with which to deal in recent times. In fact, there are some challenges through which Hull is currently leading the Chamber.

Perhaps the most pertinent of the issues Hull and the board are addressing is the retirement of Buntain, effective in December. After nearly a decade of service, Buntain will be leaving behind a huge void to fill. Hull’s plan to find a replacement began when she assigned a committee of three board members to sift through the plethora of resumes sent in by those seeking to become the Chamber’s new Executive Director. That committee narrowed the search down to three applicants, with the interview process starting last Thursday.

Another obstacle the Chamber is working through under Hull is dealing with the status of their current building. While the structure is still in solid shape, there are several upkeep issues that will need more attention in the near future. Hull is co-writing a grant proposal in order to request funds necessary to rectify such concerns.

The building provides a different complication as well. There are tenants living within its walls. While expressing that a majority of the Chamber’s experiences with these tenants have been positive, serving as landlords has produced a set of challenges unique amongst chambers of commerce.

The board is evaluating its options regarding the building. According to Hull, they are even open to selling it, if a fair offer is made. It should be noted that the Chamber is not listing the building, and that they have a particular figure in mind, which they won’t go below.

Hull hopes to put more of an emphasis toward the members of the Chamber once these issues are properly handled. In her estimation, the best way to serve their membership is to bring those businesses and service organizations together with village official.
“That’s one of the things I’ve tried to focus on,” Hull proclaimed. “bringing everyone together.”

Perhaps the best method of accomplishing such a lofty aim is to establish a common goal for both the officials and the Chamber members. According to Hull, the Chamber already has a great relationship with both local and county officials, giving Chamber leadership an advantage in this area.

When can Montpelier expect its Chamber of Commerce to pursue this direction so vigorously?

“I would say at the first of the year, you’ll be seeing a lot of activity (from the Chamber).” Hull said.

An appropriate enough time for the Chamber to follow its bright star.