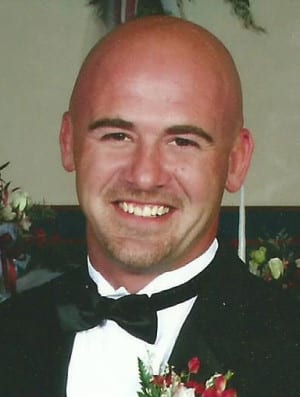 Joel W. Klingler, 40 years, of Montpelier, formerly of Bryan, passed away Sunday, February 7, 2016 at Genesis HealthCare-Bryan Center with his family at his bedside, under the loving care of Community Health Professionals Hospice.

Joel was born October 1, 1975 in Morenci, Michigan, the son of Phillip L. and Sharon L. (Hamilton) Klingler.  He was a 1994 graduate of Bryan High School.  Joel began his career working as a lineman for Time-Warner Cable.  Most recently, Joel was a repairman for Norfolk-Southern Railroad, retiring in 2009 due to his health.  Joel was a former volunteer fireman on the Montpelier Fire Department.  He attended the Bryan Alliance Church.  Joel found great joy in spending time with his children and family.  He was an avid Chicago Bears fan and he also followed NASCAR.

Visitation for Joel W. Klingler will be held from 4:00 – 6:00 p.m. Wednesday, February 10, 2016 in the Bryan Alliance Church, 220 West Fountain Grove Drive, Bryan, where a celebration of his life will take place at 6:00 p.m. Wednesday with Pastor Jon Chase officiating.  Interment will be private.  Arrangements are under the care of Oberlin-Turnbull Funeral Home, 206 North Lynn Street, Bryan.

Those planning an expression of sympathy are asked to consider memorial donations be given to the family to establish an Educational fund for his children.