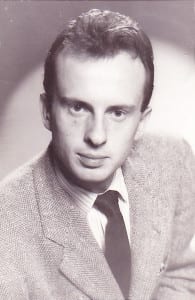 John A. “Jack” Bryce, 93, of Bryan passed Monday night at Hillside Country Living in rural Bryan. He was born on January 16, 1922 in Onaway, Michigan to Frank A. and Else D. (Winkelman) Bryce. Jack graduated from Grand Ledge High School in 1939. He then received his Bachelor of Science in Journalism from Michigan State University in 1948. He proudly served his country in the United States Army Air Force with the 8th Air Force as a bombardar with the 100th Bomb Group during World War II. Jack married Arleta “Lee” S. Kolbe and she preceded him in death in May of 2013.

In 1950 Jack became the co-owner and editor of the Leader Enterprise with his brother William. At that time they also purchased the Edon Commercial, the Edgerton Earth, and the Tri-State Shopping News, now known as the County Line.

He was preceded in death by his parents, wife Lee, and a brother William in 1968.

Memorial contributions may be given to the Hillside Country Living Activity Fund. Online condolences can be left for the family at www.thethompsonfuneralhome.com.