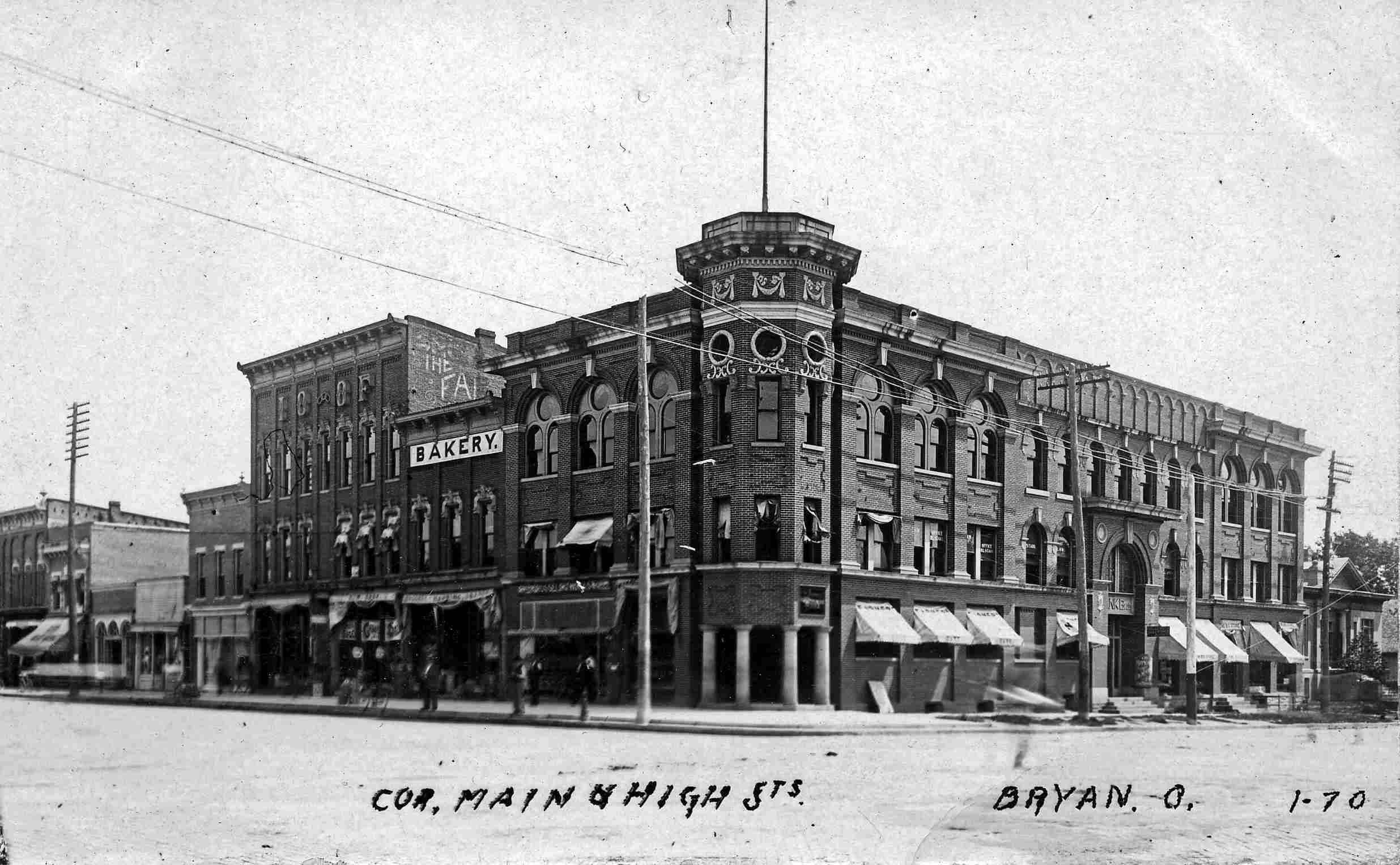 Dillinger was born in Indianapolis on June 22, 1903. According to the Federal Bureau of Investigation (FBI), “In adolescence, the flaws in his bewildering personality became evident, and he was frequently in trouble.”

In September 1924, Dillinger was sentenced to 10 to 20 years in the Michigan City, Ind., state prison for robbing a Mooresville, Ind., grocery.

In March 1933, President Franklin D. Roosevelt declared a “bank holiday” that closed all of the nation’s banks, including those in Williams County.

The bank holiday was designed to stem bank failures and restore confidence in the nation’s financial system.

The Home Savings Building & Loan on the west side of the courthouse square was the only Bryan financial institution that reopened at the end of the mandated three-day bank holiday.

With local residents’ and businesses’ money tied up in closed banks, the Bryan Business Men’s Association issued paper scrip in various denominations that was temporarily used to meet payrolls and make local purchases.

John Dillinger was paroled in May 1933 and began a series of daring crimes. According to the FBI, “From September 1933 until July 1934, [Dillinger] and his violent gang terrorized the Midwest, killing ten men, wounding seven others, robbing banks and police arsenals, and staging three jail breaks—killing a sheriff during one and wounding two guards in another.”

While incarcerated, Dillinger fell in with a gang that developed a well-organized system of bank robbery that proved extremely effective.

After identifying a bank to be robbed, the gang conducted reconnaissance trips to familiarize themselves with the financial institution’s layout, location of safes, and which bank employees could open the safes.

The bank robberies were well orchestrated, with each villain assigned tasks to complete within a specified time limit. The gang exited the bank when time expired—with or without money—speeding away in a fast car over a carefully planned escape route.

Sometime after his May 1933 parole, Dillinger visited Bryan to evaluate the prospects for a “heist,” as detailed in this article from the August 16, 1934, Bryan Democrat newspaper: Dillinger Visit to Bryan Listed Bank Job “Sweet”; Robbery Here Planned, but Raid at Dayton Sent Gang into Flight

John Dillinger made a trip to Bryan in the summer of 1933 to map out plans for an intended holdup of the Citizens National Bank which had been opened but a short time, it has been revealed by the Toledo News-Bee.

A copy of the chart in the desperado’s own hand-writing was published yesterday, showing that he had planned robberies in Paulding, Leipsic and scores of other places.

The chart read as follows: “Bryan 4689 on St. roads 127 and 6. Only one jug [bank] open in town. A new jug taking over the old Farmers Trust. A sweet job. Investigate thoroly for a heist and open up.”

After investigating, Dillinger evidently decided this would be an easy, sweet job, and he decided to make a thorough investigation, including drawing of a map of the town and roads leading away, so that his gang would be assured of a clean and quick getaway.

The chart has been in the custody of police since last August when it was found by Matt Leach, captain of the Indiana State Police, who made a raid on Dillinger’s flat in Dayton to arrest the outlaw.

At that time he was placed in jail at Lima, and was later freed at the time of the murder of Sheriff Jess Sarber.

It is also believed that Homer Van Meter, sleek “finger man” for the Dillinger gang, first spotted the banks to be raided in Ohio and Illinois.

Then Dillinger personally visited the scene of each proposed bank robbery after Van Meter or another gangster had provided the preliminary layout. At times Dillinger played the part of a businessman and talked with bankers.

He kept notes and in leaving a bank would then check distances on the speedometer of his auto to clock off figures used in escaping after the robbery. He would time the holdup perfectly and usually led the way into the bank, Pierpont watching the door and the others merely taking orders.

The chart was mapped out after Dillinger had made possible the escape of eight convicts from the Michigan City prison. The Bryan and Paulding holdups might have materialized eventually had not a flaw developed.

A stool pigeon told officers that Dillinger was hiding in a flat in Dayton. The flat was raided, Dillinger was captured, and his plans found by officers.

Then the Lima sheriff was slain, the gang fled toward Chicago and the west, and operations in Ohio were abandoned.

Had Dillinger’s gang visited the Citizens Bank it would not have been as sweet a job as his note indicated that he believed it would be, for this was when the bank first opened, and while there was considerable cash on hand, there was also a guard in the bank armed with a machine gun.

The guard was concealed in such a manner that he had a sweep of the lobby and could have taken speedy and effective action, even with a Dillinger.

Late local resident Grant Brown worked at the Citizens National Bank from 1933 to 1944 and was familiar with the story of Dillinger’s planned robberies.

He remembered that circa 1933 he thought he saw the notorious criminal pull his automobile into the Main Garage on the west side of the 100 block of North Main Street in Bryan.

He quickly located Officer Charles Grim who, being the only law enforcement officer on duty, visited the Main Garage to learn the stranger’s identity.

Brown recalled, “I always thought that was a pretty brave thing to do considering it might have been Dillinger.

It turned out not to be him, but Charlie told me I had done the right thing in alerting him because it could have been Dillinger. I’ve never forgotten that.”

Dillinger’s reign of terror continued into 1934 and included thrilling prison breaks; however, like so many who lead a violent life, Dillinger’s life ended early and violently.

On July 22, 1934, at the age of 31, John Dillinger was fatally wounded by FBI agents as he exited Chicago’s Biograph Theater.