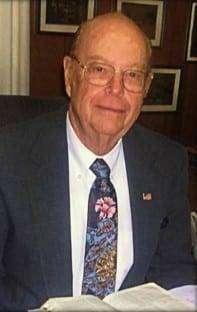 Joseph B. Redmond Jr. was born January 24, 1934 in Zanesville, Ohio to Joseph B. Redmond and Palma (Katherine Shockey) Redmond. He attended school in Zanesville and graduated from Lima South High School in Lima, Ohio in 1951. Upon graduation he attended Nyack College in Nyack, New York and completed his college training at St. Paul Bible College.

Rev. Redmond was active in the Christian Union Churches having served pastorates in Delphos, Grover Hill, Newark, Wapakoneta, and Fayette Ohio, and in Hennessey and Oklahoma City, Oklahoma. His most recent pastorate and ministry was at the Olive Branch Christian Union Church in Fayette, Ohio, where he pastored from 1995 – 2015.

He was preceded in death by his wife Rose of 52 years in 2006, his youngest son Thomas in 2007, his parents, Joseph and Kathryn Redmond, and sister Palma Wilson.

Memorials may be sent to Joseph Redmond Memorial, P.O. Box 756, Jenison, Michigan 49428. Please designate on check as to where funds are to be directed. Suggested Memorials: Olive Branch Christian Union Church or Christian Union Missions.