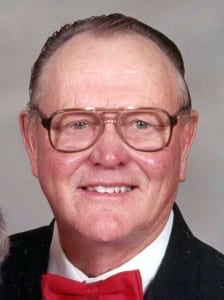 Lloyd W. Bowman, 84 years, of West Unity, passed away Friday, February 22, 2013 at Community Health Professionals Inpatient Hospice, Defiance. Lloyd was born September 21, 1928 in Zone, Ohio, the son of the late Franklin Benjamin and Alice May (Benson) Bowman. He was a 1946 graduate of West Unity High School, where he played on the high school basketball team. He married Joline Anne Shaffer on June 12, 1949 in West Unity, and she survives. Lloyd was a lifelong dairy farmer. He also owned and operated Bowman Dairy Bar Restaurant for 43 years. Lloyd and his wife Joline also operated a Dairy Processing Plant and delivered milk house to house and to businesses until its closing in 1982. He was a member of the West Unity United Methodist Church. He was involved with the Gideon’s International, the Bryan Madrigal Choir, the Sounds of Joy Quartet and the Barbershop Chorus of West Unity. In his younger years, Lloyd was involved with Hamer Tech Basketball Squad.