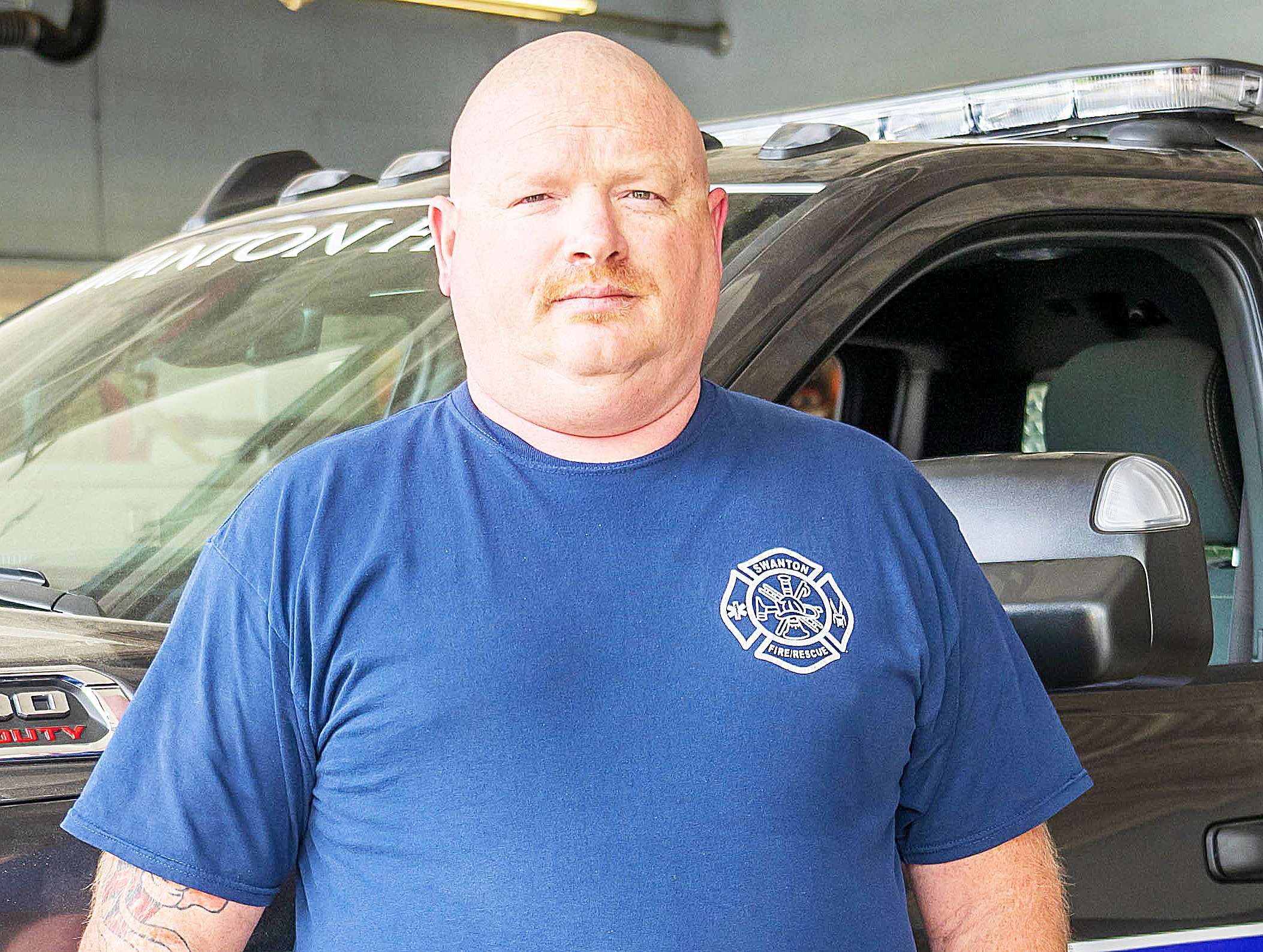 SWANTON FIRE CHIEF … New Fire Chief Ed Dziengelewski stands in front of the departments new brush truck that has been painted to represent the colors for Swanton Schools. (PHOTO BY JACOB KESSLER, STAFF)

Fire Chief Ed Dziengelewski has been serving in the fire service for 27 years now. At age 18 and fresh out of high school, he signed up for one of the most dangerous and yet also most rewarding jobs there is when taking into account those two things.

He signed up to be a volunteer firefighter. He started his career at the Springfield Township Fire Department where he remained for 18 years.

His career brought him to work at the Swanton Fire and Rescue Division where he has been for the past 11 years now.

He has continued to serve the department, moving up the ranks to serve as a Lieutenant for 3 years and Captain for 2 and a half years, before ultimately making his way to Chief.

In addition to those ranks, Chief Dziengelewski has attended a host of classes, has taught classes, performed duties as a fire instructor to teach new fire fighters, has attended a BlueCard Command System class, and has completed Fire Levels 1 and 2.

Fire Fighting is also a family activity as his wife, Amy Dziengelewski, has been a member of the Swanton Fire Department for 15 years.

“It has taken a lot of time away from the family but that is the nature of the job. I started with this at age 18, fresh out of high school.”

“I wasn’t even sure if I was going to like the job. I did end up liking it though and ended up liking every aspect of the job. Everything, from driving trucks to interior fire attack, vehicle extrication, you name it.”

“The past 27 years have been a blast and I couldn’t imagine where I would be today without the fire service. The brotherhood and sisterhood, the family setting and the friendships made over the years doing this job, it has been astronomical.”

“One thing I am sure of is that we have bad days, sometimes really bad days. But each of the good days has a way to take it all away.”

“I am just excited, and I am looking forward to working with everyone here and the neighboring fire departments. We all work together on a regular basis, and we work well together,” said Chief Dziengelewski.

He continued on and explained that there are going to be some changes made to the department but that they will all be for the good.

“With a mix of a little old, and a little new, we will get back to being what we used to be, but even stronger,” he explained.

Chief Dziengelewski plans on being a working Chief and will even cover open shifts when needed and will continue to go out on calls just like everyone else.

The Swanton Fire Department runs on close to 1,300 calls each year. In addition to their Firefighters, EMT’s and Paramedics, the department runs with 2 engines, a tender, 2 brush trucks, the Chief vehicle, and squads Medic 72 and ALS 7.

These resources will be seen more often by the public according to the Chief. “Public relations is something I am very big on. This new brush truck was done this way for the public.”

“Its colors represent the school and everyone who has seen it loves it. I want to get out into the community much more often and be involved,” said Chief Dziengelewski.