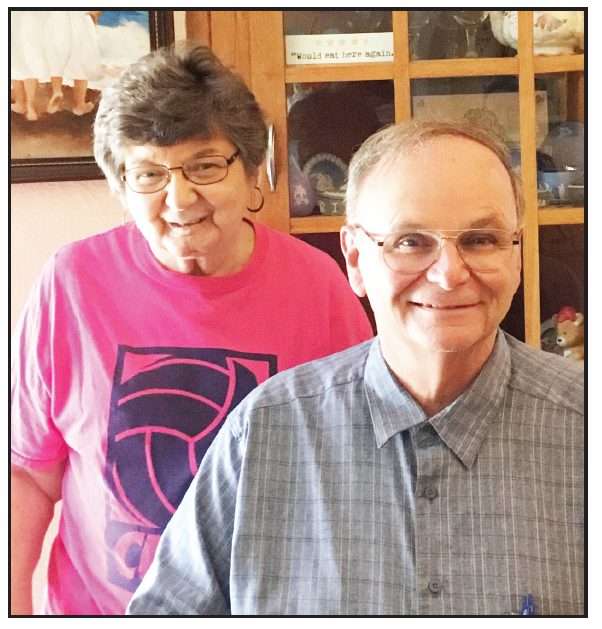 STRYKER GOOD NEIGHBORS … Nick and Linda Woodall, seen here at their home in Stryker, Ohio, were recently chosen to receive the Stryker “Good Neighbor of the Year” award. On Saturday, August 21, 2021, they rode in the Stryker Heritage Day Parade on a flatbed truck driven by Mayor Joe Beck, and they will be presented with a plaque at the September Stryker Village Council meeting. Congratulations to the Woodalls! (PHOTO BY REBECCA MILLER, STAFF)

People in Stryker can hardly remember a time when Mr. and Mrs. Woodall were not a part of the community. Linda served the community as a teacher in the Stryker School District for thirty seven of her forty two years of teaching, and Nick has pastored the Stryker United Brethren Church for the past thirty years!

They have lived in the same house, on the edge of town, which they purchased from fellow Stryker teacher Dave Graber in 1986, and have loved having a relationship with the people of Stryker.

Gary Stuckey, the person who nominated the Woodalls for the “Good Neighbor of the Year” award, said on his nomination form, “Who holds the heart of the community in their hands more than Nick and Linda? Who does one turn to when the doctor’s report is bad, when a family member is dying, or when a child or marriage is out of control?

Who does the community lean on when they need an encouraging word, a reassuring smile, a genuine word of appreciation or a sign of hope?

Nick and Linda’s ministry is often quiet, behind the scenes….they provide an extremely valuable resource to our community that may be overlooked or taken for granted. I believe that now would be an excellent opportunity to thank them for all they have done among us.”

Nick Woodall was born to Robert and Evelyn Woodall in Toledo in 1950, grew up there and graduated in 1968 from Northwood High School. Linda Atkinson Woodall was born in Zanesville, Ohio in 1947 to Clarence and Cathryn Atkinson.

She graduated from Zanesville High School in 1965, “in the middle of the Vietnam War,” and went on to college at Malone in Canton, Ohio. It was there that she met Nick in her Senior year, when he was a Freshman.

“I was actually trying to set him up with a good friend, who is still our friend, when he asked me out,” Linda shared with a smile. They dated for three years and got married in August 1971, in her hometown at the Zanesville Free Methodist Church, before Nick’s Senior year at Malone College.

Having graduated with a Bachelor of Science degree in Elementary Education, Linda got her first teaching position in her hometown of Zanesville before they were married.

Nick was studying to be a Math Teacher because, as he says, “I had always been a Math Head,” but during the summer of 1970 he “got the call of God to preach and be a pastor.” At that time he was working at his dad’s gas station and taking a math class at Bowling Green.

As he was taking a review test over something he had gotten an A for in HighSchool, he basically drew a blank because all he could think about was that God wanted him to be in the ministry.

He got a C on the math test. That Fall he changed his major at Malone to Biblical Literature and graduated in 1972 with a degree in that major.

Asbury Theological Seminary in Wilmore, Kentucky was where they ended up attending after Nick graduated from College, as the Free Methodist Church gave him scholarships to attend there, and he agreed with the conservative doctrine taught there.

“They preach the Word,” Nick shared, “and their connection is with John Wesley and Francis Asbury.” He graduated from the seminary in 1977, and as he was pastoring already (for two years) with the Free Methodist Church in Kent, Ohio, the Ohio Conference of that denomination appointed him to pastor the Free Methodist Church in West Unity, Ohio. He served for the next twelve years at that church.

While in West Unity, he and Linda met Pastor Robert and Betty Waggoner who were serving at Evangelical Mennonite (Evan, which is now Solid Rock) at the time.

They fellowshipped together and encouraged each other for years. As Nick shared, “He took us under his wing and we met with them every month at the Pastor’s Monthly Dinners in each other’s homes.

Bob and Betty headed it up and all the West Unity pastors had great unity during those years.” Linda added that while they lived there, their newspaper was always delivered by one of the Waggoner children.

Also while living in West Unity, Linda was hired to teach at Stryker Local Schools, located just ten minutes away.

Nick shared that all through his years of answering the call of God, he is “continually seeking God’s guidance for His direction.”

Even after he became the pastor at Stryker United Brethren Church, he held the Attendance officer position for twenty eight years and was a Diversion Counselor for twenty six years. “I have always been part time at the church so I was able to do all three jobs at once,” he explained.

As far as how they got connected with the United Brethren Church after having served with the Free Methodist Conference, Nick shared, “I got saved as a teenager at a Freewill Baptist Church while I was going there because my girlfriend at the time had invited me to attend.”

“When we broke up, my mother said I should go somewhere else, so I went to Walbridge United Brethren Church for a year and was baptized there by Reverend Kenneth Graham. So that is how I got connected with the United Brethren.”

He sees it as a “God thing” that they were living in Stryker, had a connection with the Brethren Church from his past, and were available when Ernest and Peg Belella were ready to retire from their service at the Stryker United Brethren Church.

Family wise, the Woodalls have four children. Their oldest child, Nicole, whom they adopted, joined their family when she was 23 days old. Nicholas was born in 1982 and the twins, Heidi and Lindsey were born in 1986.

All four children attended school in Stryker. Sadly, their daughter Nicole was killed in a car accident when she was 17 years old, on December 23, 1997.

Every time that he sees the number 23, and it occurs many times a day Nick said, he thinks of their dear Nicole and thanks God for his memory of her. Nicholas graduated from Stryker High School and went on to college at Hillsdale in Michigan where he graduated with a degree in Marketing and Management.

Lindsey and Heidi both graduated from Stryker as well and became teachers after getting their degrees from Malone College, their parents’ alma mater. Nick and Linda joyfully added that they now have four grandchildren whom they adore.

They wish their children and grandchildren lived nearby, but cherish every visit in which they get to see that Linda retired from her teaching career in 2011 and has been working as a Librarian in the Stryker Branch of the Williams County Public Library for 10 ½ years, with the past year off for the COVID pandemic.

She is well loved by all the children, and the adults, who visit the library, and during the pandemic, her story times online were so helpful to those with little ones.

When asked about the timeline for his retirement, Nick said that every time he has a funeral or something else he needs to assist, he sees those as reasons why he hasn’t yet retired.

“I will keep preaching as long as the Lord keeps me doing it,” he said. “I will wait for Him.”

These two people are so faithful to do whatever they set their hands to and have a track record of long term service! Stryker is blessed to have them as a part of their community.