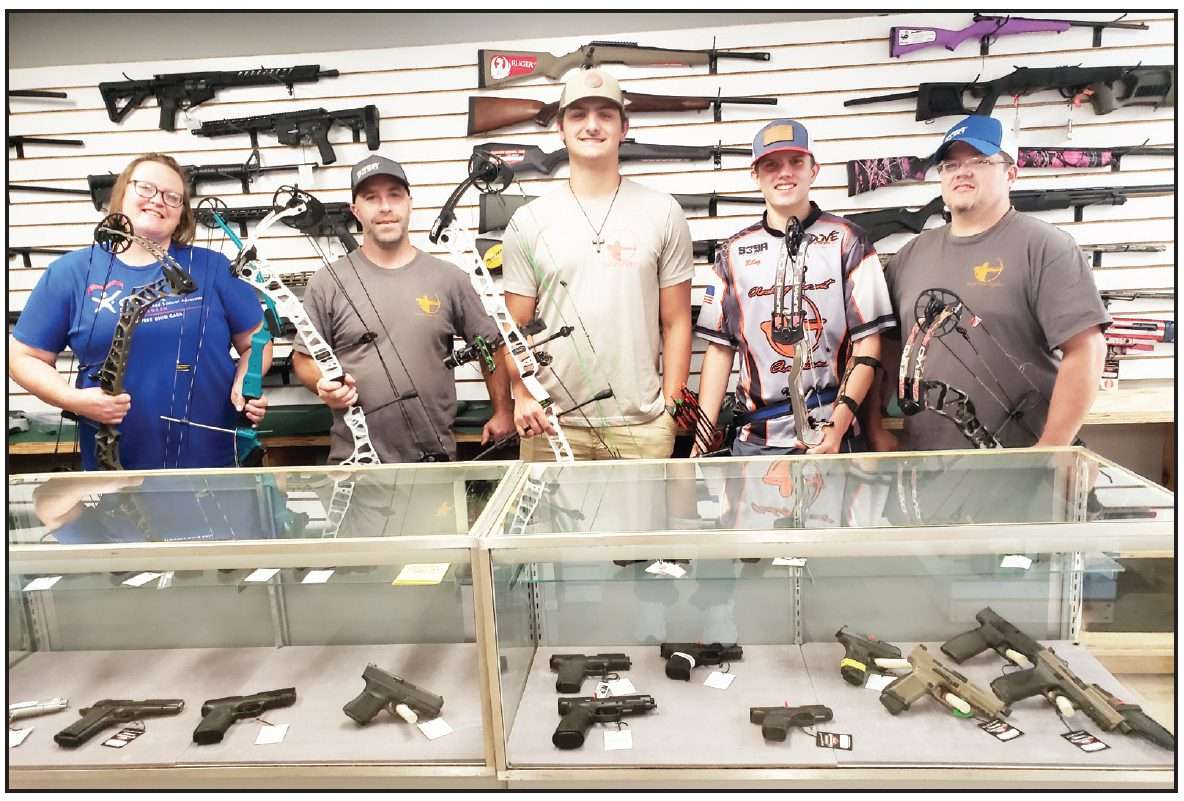 “The sport of archery in Ohio has more than doubled,” said Fairview scholastic coach Josh Kimpel. “A year ago, there were about 100 kids involved in archery and today, there are 250. In northwest Ohio alone, there are more than a dozen scholastic archery teams.”

Scholastic archery includes a regional, state and national tournament. And if you’re good enough, you could also earn a college scholarship for archery.

It appears, then, that Kimpel is opening up Nocking Point Outfitters, an archery and gun shop, at the right time. The new store, located at 01116 County Road 17 in Bryan, celebrated its grand opening two weekends ago. To be exact, Nocking Point is located about 300 yards north of County Road A.

The store is a full service archery and gun shop. Employees also give archery lessons and you can even get a fishing or hunting license there.

“If we don’t have (your product in stock), we can have it custom made,” Kimpel said. Or, they’ll find a way to get it for you.

As far as archery lessons go, there is a 5,000 square foot room, with plenty of targets, to practice on. Nocking Point has four USA archery certified instructors, Kimpel, Dane Johnson, Riley Zachrich and Josh Zachruch.

While most lessons for youth are for ages fourth grade and up, there is instruction for younger students, too, as well as instructions for adults.

Nocking Point sells the four most popular archery brands of Mathews, Bear, PSE and Mission. But they can also find a way to get another brand for a customer, if they prefer that.

So, why the name Nocking Point? “It’s the point where the arrow has a nock that clicks into the string,” Kimpel said. “It’s where you start with each arrow.

And the name outfitters came about because I didn’t want to be just an archery shop. I wanted this to be a gun shop, too.”

Nocking Point came about because of the need for more equipment for Kimpel’s archery students. First, with the scholastic season ending in April, Kimpel started off season archery, 3D (archery), for the summer and winter seasons.

Currently, Kimpel has a team that includes area students, as well as Fairview students, numbering around 30.

But Kimple needed not only a place for the students to practice, but to be able to supply the students with extra bows. “I was told, if you’re going to provide and sell bows to your students, why not go all out and start a shop,” Kimpel said. “So that’s how that idea got started.”

Next, one of the eventual co-owners, Dustin Schlacter, Kimpel’s brother-in-law, provided the building for both the shop and target rooms.

Then, Kimpel met the other eventual co-owner, Jeremy Herman. Kimpel won a gun in a facebook contest and bought a gun from Herman, a gun owner who, at that time, sold guns out of his home.

“Jeremy wanted a place to sell guns, so that’s how he became a part of our shop,” Kimpel said.

As far as upcoming events, on September 1, at 6 p.m., there will be an information meeting for anyone interested in taking classes, or lessons.

“We can answer questions and if they are interested, get them into time slots,” Kimpel said.

“There will be outdoor shooting games and then a campfire at dusk, where pastors will pray over the bows and hunters, for a successful hunting season,” Kimpel said. “All are welcome.”

For more information about Nocking Point Outfitters, contact the store, at 419-633-3150.