EDON – The Northwood Rangers are no strangers to the Edon Blue Bombers. As members of the Toledo Area Athletic Conference, the Bombers and the Rangers collide every year, and the results have seldom been good for the Bombers…justifiably so. Over the past ten seasons, Northwood has either owned outright or shared the TAAC championship. Their Houdini-esque operation of the option offense is mystifying to defenses everywhere, and on September 14, they befuddled the Bombers by a 49-12 score.

As they did last year, the Bombers made sure that the defending TAAC champions knew that they were in for a fight. Edon jumped out to an early 6-0 lead as Kaden Sapp found Connor Hug for a 57-yard touchdown strike with 11:19 left in the first period. The PAT failed, but the west side stands of Leanne Field were rocking. Unfortunately, the celebration was extremely short lived.

Upon taking the kickoff, Northwood trotted out their option offense. The best way to describe a Northwood play is to envision the quarterback in the pistol position, with a receiver in motion and two running backs in the backfield. The ball is snapped as the receiver is nearing the guard position, and the quarterback, receiver and both running backs form a small huddle behind the center. Once the huddle breaks, one of the four has the ball, but the play is so well executed it is difficult to tell who the carrier is.

Just 13 seconds after the Bomber touchdown, a well-disguised handoff resulted in the Northwood Rangers tying the game after a 59-yard run. The PAT was good, and thus began a Northwood torrent of 49 unanswered points to close out the first half, 49-6. The Bombers got back on the board with 3:31 left in the game as Landon Bloir ran the ball in from six yards out to end the scoring at 49-12.

Sapp finished the night 10 of 23 passing for 169 yards and 4 picks for the Bombers. Hug was the top receiver with 5 grabs for 149 yards and a score. Trevor Green led the ground attack with 6 rushes for 33 yards.

Edon continues their TAAC tour for 2012 on September 21, as they travel to Lakeside to do battle with the Danbury Lakers. 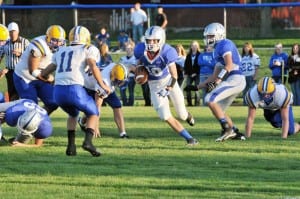 TIME TO BAIL … With pressure in his grille, Edon quarterback Kaden Sapp takes off on a run. (Order this photo & view unpublished photos of this event at www.thevillagereporter.com)

Be the first to comment on "Northwood Rangers Unleash A TAAC Attack On The Edon Bombers, 49-12"