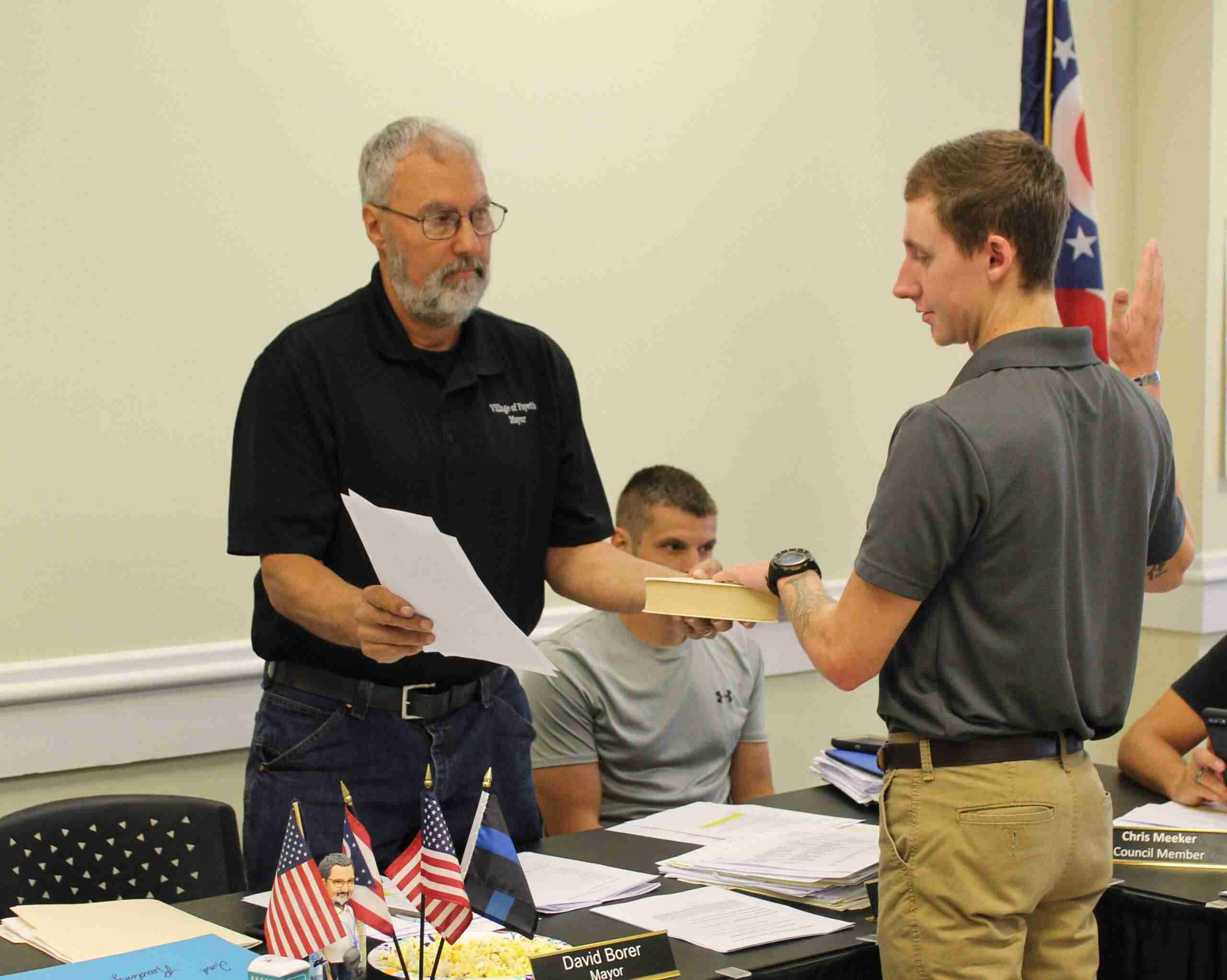 TAKING THE OATH … Mayor David Borer administers the oath of office to Christian Renner for the position of part-time police officer in Fayette.

The Fayette Village Council held their meeting on Wednesday July 14th with council member Suzette Boesger absent. The meeting was called to order at 6pm followed by a prayer and the Pledge of Allegiance.

Approval of the agenda then took place with the noted addition of Legislative actions E and F being added. Council then moved to approve the minutes from the June 23rd meeting as well as the governmental affairs and safety committee meetings that took place on July 7th.

Recognition of the visitors then took place with Brittany Theis from the Fayette Bull Thistle Committee speaking. Brittany gave an update on the coming festival saying that there will be 46 to 47 paid vendor and merchant spots, 8 food vendors with another one possible. 47 parade entries are signed up so far not including police and fire departments.

There will be bounce houses, a train ride, petting zoo, a smoke house demonstration from the fire department, tractor show, arm wrestling competition, and more.

There are plans in the works to get a volleyball competition going as well. Life Flight and Promedica Air will also be landing at the event.

In the Mayor’s report, he let everyone know that he will not be present for the Wauseon Homecoming parade and that the position is open for a council member to take his spot in the parade.

Moving to the Administrators report, the American Rescue Plan funds were discussed. On July 9th there was a meeting that was attended and gave information regarding the application process that must be followed now.

Once the application is complete and submitted it needs to be approved. Once it is approved the hope is to receive the funds in a few days. More information is yet to come, and an update will be given when the information is available. A motion was then made to approve the Master Service Agreement which was passed.

A change was then noted for the list of bills for the council to vote on. A motion was made to approve and pay the bills and was approved.

In the council’s police report Chief Jason Simon said that the village is currently seeing an increase in calls during the past few weeks and that the only other item for him is the Legislative action for Christian Renner.

In reading of communications, the mayor received thank you notes for the police department. The first thank you note was from the Dennis Apartments for coming to the fire last month and helping everyone. The second note was a letter of love and prayers and a third was from a someone who had lost their father who was a police officer.

The council then moved to the second reading of ordinances 2021-09 regarding Increases in Revenues and 2021-10 for supplemental appropriations.

In Legislative actions a motion was made to hire Christian Renner as a part-time police officer for the village. The motion was approved. The mayor then swore in Officer Renner.

Afterwards, a motion to approve the Bull Thistle parade, festival application and fireworks event application was made and each issue was passed separately with additions that had been made regarding a petting zoo, volleyball competition and helicopter landings.

A motion was made and passed to direct Administrator Biddix to sign the Master Agreement for professional services with Arcadis not to exceed $195,000.

Another motion was also made and passed to renew the school resource officer contract with an updated Schedule A for 2021-2022.

With nothing new to discuss in new or old business a motion to adjourn was made and passed at 6:38pm.