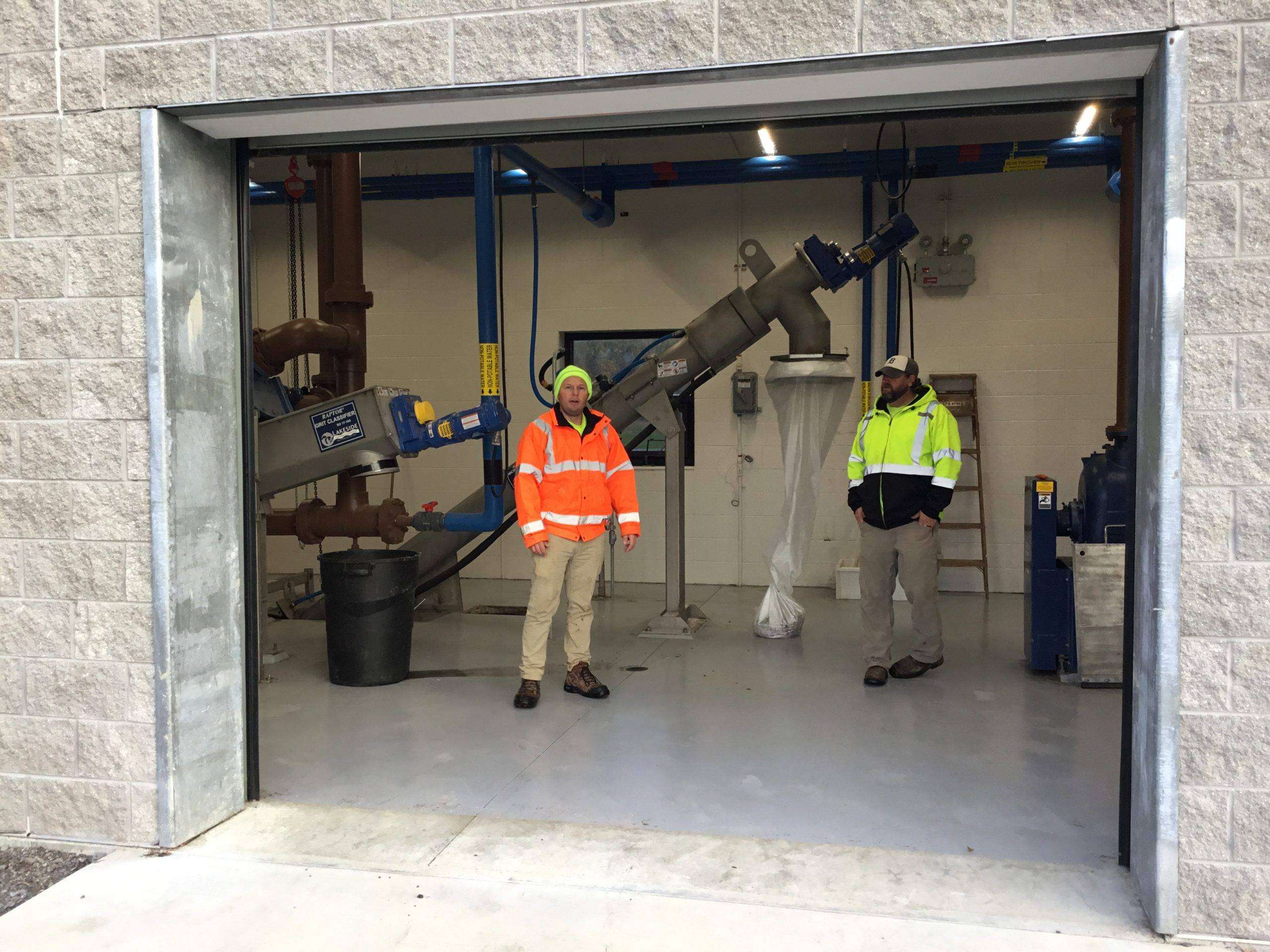 HEADWORKS BUILDING … In the past, after the sewage came through the pump station, it was strained through a bar screen as the first step of treatment began. Mahlman had to rake off all the large items such as paper, feminine products, and any other items that should not have been flushed. “We would gather 4-5 gallons a week of trash and had to do that everyday,” Mahlman explained. The smell in the building was nasty, thus making for a very unpleasant task. The brand new Headworks building was built to replace the old, and is outfitted with a grit and solids removal system that includes a large disposable bag hanging at the end of the pipe. All the items that should not have been flushed are screened out and fall into that bag, which is removed once a week. “That bag can be left up to a month,” Mahlman explained, “but we take it off once a week for sanitary and odor reasons. On the left is Mahlman and village maintenance crew member, Matt Axford. (PHOTOS BY REBECCA MILLER, STAFF)

West Unity opened their wastewater treatment plant for tours on October 12, 2019 during the village’s Fall Fest. The plant’s new equipment has been up and running since October 2018, and plant manager Randy Mahlman who’s official title is Water and Wastewater Supervisor for West Unity, has had a year to work out the kinks. “It is a huge improvement in every way over what we had before, even after the 1998 upgrade,” Mahlman said.

The process of getting this new plant took about four or five years, starting with applying for grants and determining what was needed as the EPA has classified West Unity as a Village that needs an EPA Class 2 Plant. One of the greatest things for West Unity is that the village received a grant for 100% forgiveness of a loan principal from the Ohio EPA Water Pollution Control Loan Fund, the total project cost, which was $2.68 million, was completely covered. This allowed them to purchase some extra equipment, making the place’s care even easier, more efficient and cleaner. 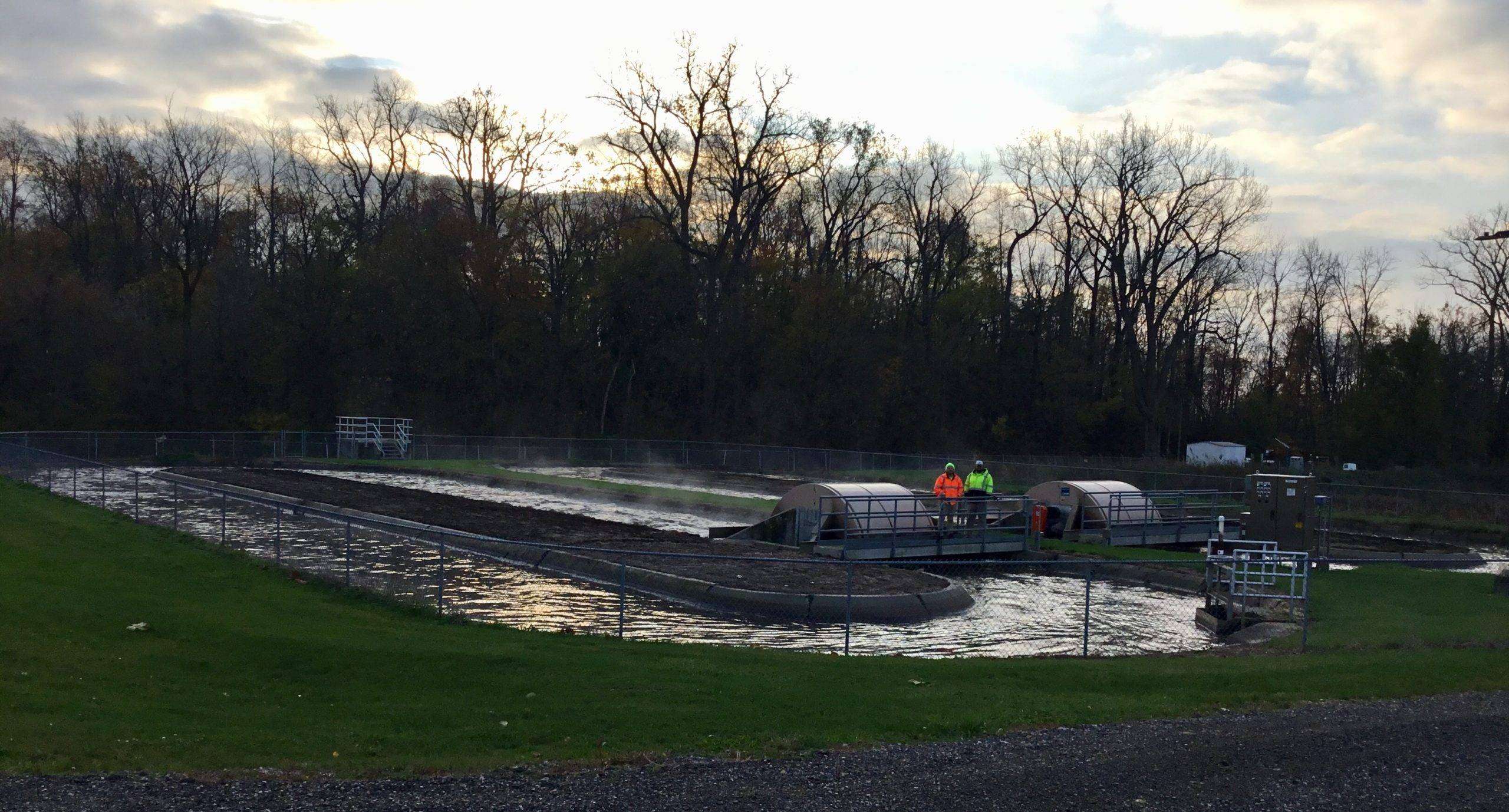 OXIDATION DITCHES … After the sewage has been strained there, it goes to a splitter box, which can be seen at the far end of these ditches, with the stair platform on top of it. The Splitter Box divides it and redirects it into the two oxidation ditches. The new aspect about the ditches is that they have much larger and more efficient Aeration Rotors which make the dirty water swirl around, filling it with air and helping to start the separation process. Mahlman and Axford can be seen here standing between the new rotors. The previous rotors didn’t incorporate enough air to keep the ditches from freezing on top in the winter. Each of the long oval ditches hold 116,500 gallons of waste water, continually swirling in opposite directions, making it look like a large figure 8, earning it the nick-name, “the racetrack”. As the water moves in the oxidation ditches, the solids coming through the splitter box are being mixed in with what is already there. The constant inflow of new waste feeds the microscopic bugs and small worms which are breaking the waste down continually. 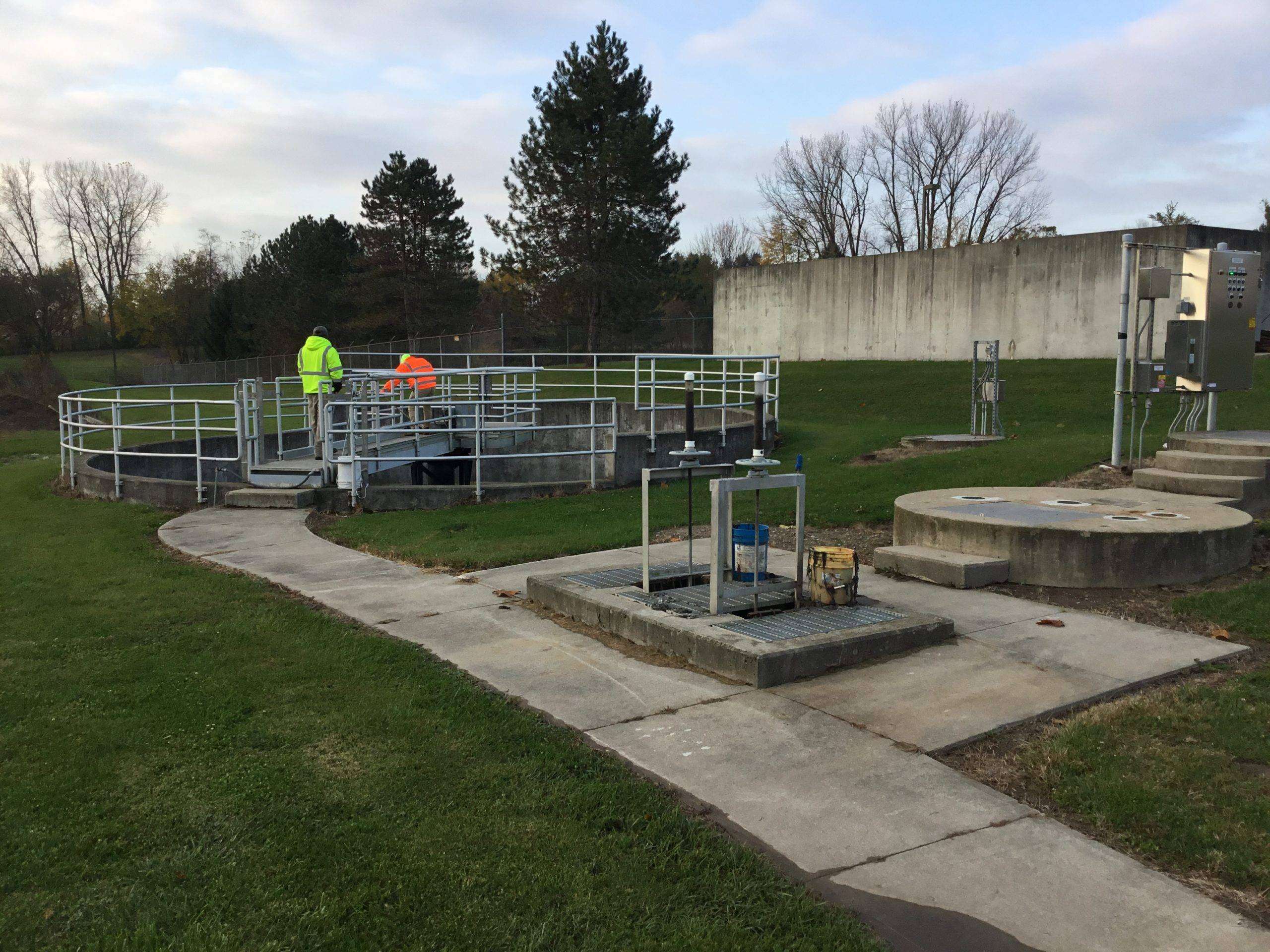 CLARIFIERS AND DIGESTER…The next step for the waste occurs as it is sent into the Final Clarifiers.  The West Unity Plant has two of these large vats, which are about 30 feet across, 20 feet deep and hold the sewage while the suspended solids are removed from the waste stream.  Some of the solids get returned to the oxidation ditches to keep letting the waste get broken down and the water that has risen to the top is clear enough to go on to the upgraded UltraViolet Disinfection Unit. When too many solids are in the clarifiers, some of it gets sent to the Digester, a large concrete rectangle where it is drained, which can be seen to the right of the Clarifier where Mahlman and Axford were working.  Some of the solids are returned to the ditches, and the rest is removed, to be delivered to an EPA (Environmental Protection Agency) approved field near West Unity, to be applied and tilled into the soil. 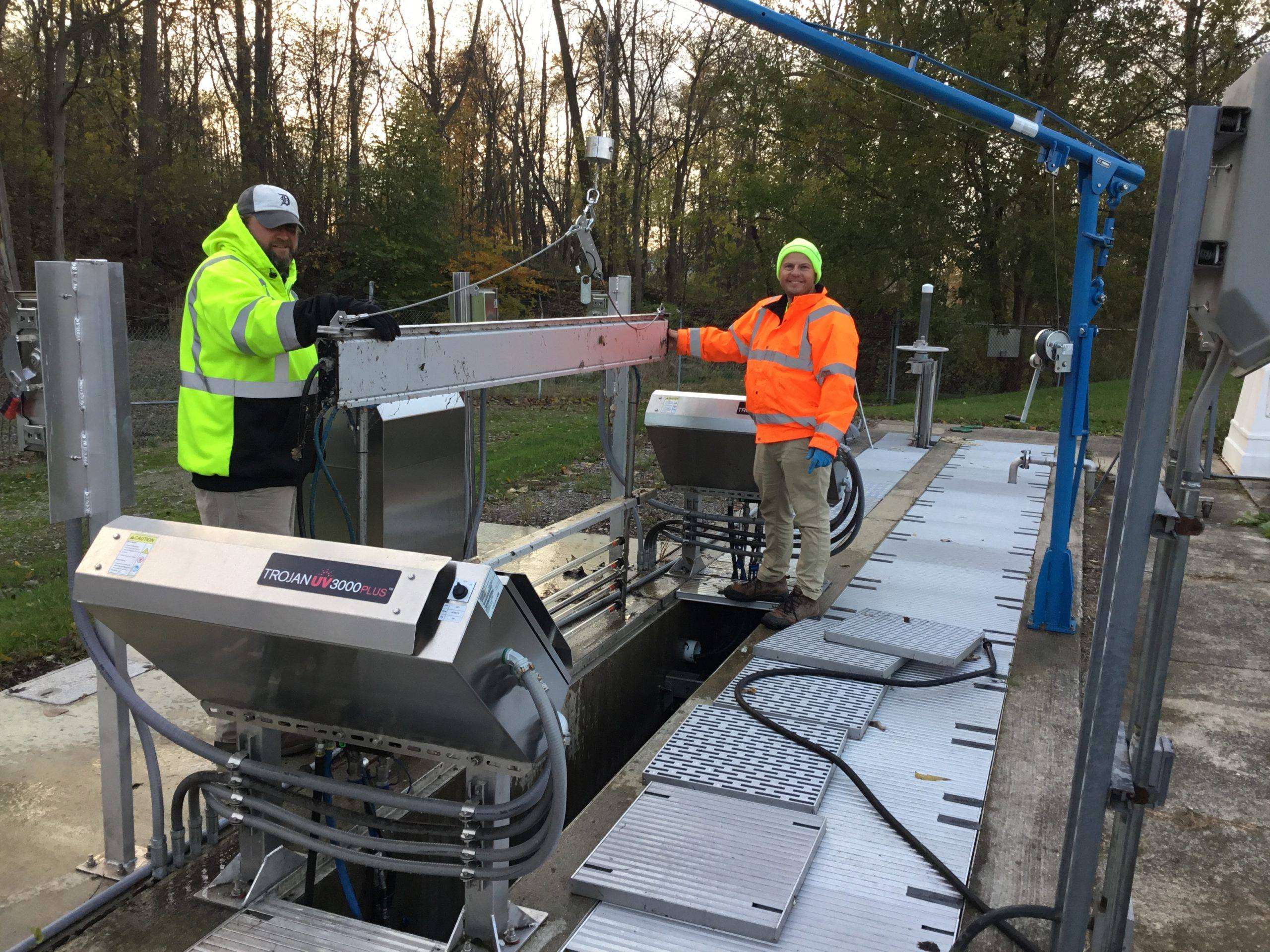 UV DISINFECTION UNIT … At the last step of purification, the clear water which has come from the Clarifier, has UV rays shone through it by two sets of 4 bulbs that are 6 feet long on a rack that is 7 feet tall. (This unit  is located on the other side of the old treatment pond, which was used from 1969-1997 and is now being slowly filled. Eventually it will be filled enough for them to put a cover of dirt and grass on it.)  The UV process disinfects the water so that it can be discharged into the Walnut Run Creek. Mahlman explained that the water that is sent into the creek has tested as cleaner than the water that is already there. Mahlman and Axford were in the process of cleaning the Ultra Violet bulbs. They had taken off the grates on the top and lifted the first set up, using the small crane, and out to spray them off with the hose. This is done at least once a month. 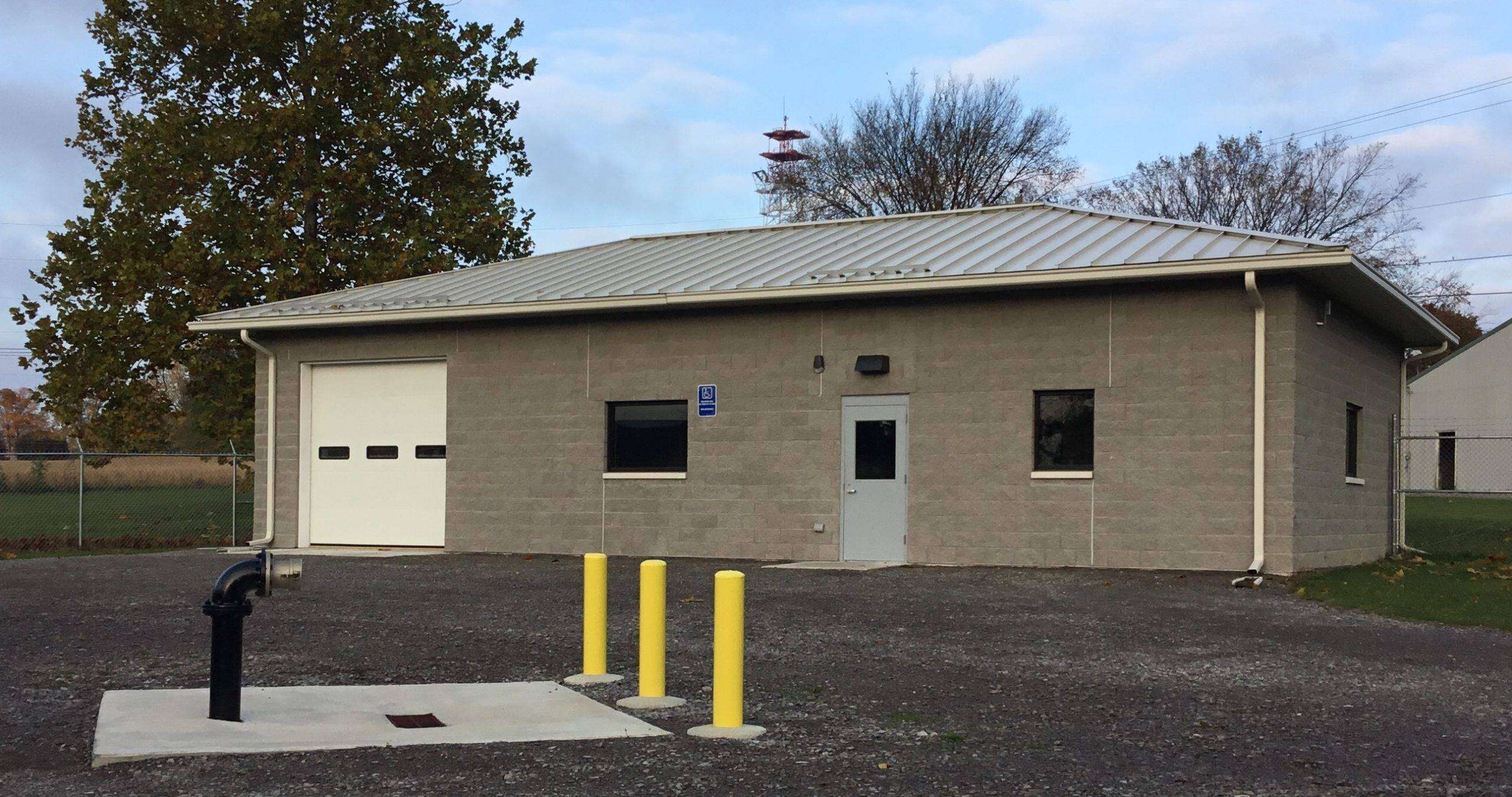 LAB AND ADMINISTRATION BUILDING…Speaking of testing, the Treatment Plant also got a brand new Lab and Office building, which is the pride and joy of those who work there. The new lab is greatly updated and they no longer have to send their water samples away for ammonia and ecoli testing, but can do all the testing themselves. “It makes our job a lot easier,” Mahlman said, “along with it being so much more efficient and always up to date for the EPA.”  This new building includes a garage as well. 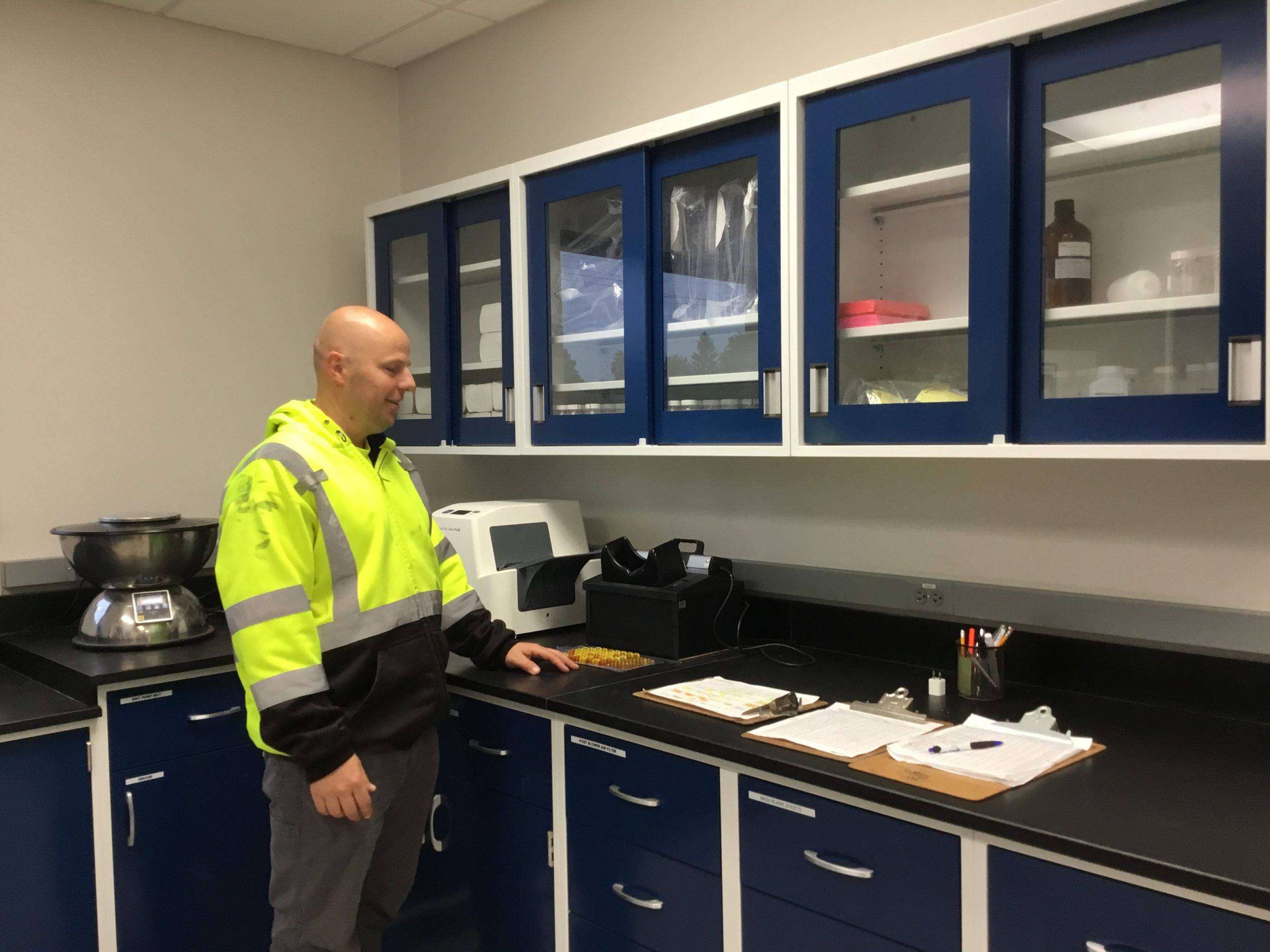 VIEW OF THE LAB … Mahlman is seen here in the lab where tests are done. When asked about the cleaning of the plant, Mahlman said that it is much easier with the newer equipment. They hose down and scrub the exterior parts of the Oxidation Ditches and clean the Clarifier at least once a week during the summer. The Headworks building gets swept and mopped once a week and the screen that gets clogged with hair gets cleaned out as well. The interior UV bulbs clean themselves, but he opens it up and hoses down the bulbs once a month anyway.  Basically they are always inspecting and cleaning as it is needed. The process of getting this new plant took about four or five years, starting with applying for grants and determining what was needed as the EPA has classified West Unity as a Village that needs an EPA Class 2 Plant.  One of the greatest things for West Unity is that the village received a grant for 100% forgiveness of a loan principal from the Ohio EPA Water Pollution Control Loan Fund, the total project cost, which was $2.68 million, was completely covered. This allowed them to purchase some extra equipment, making the place’s care even easier, more efficient and cleaner.
Rebecca can be reached at publisher@thevillagereporter.com