Pioneer’s Schmucker Hopes To Volunteer As Long As She Can 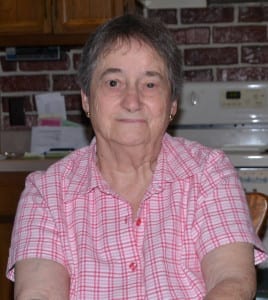 Every community has familiar faces and Pioneer is no exception. But, Pioneer has the exceptional Audree Schmucker.

Audree was born and raised in Pioneer and attended Pioneer High School before it was North Central. She married Ronald Schmucker in 1955 after he served in the United States Armed Forces in the Korean War.

“Brother and sister married brother and sister,” states Audree. Her older brother Jim married Ronnie’s sister. It was Ronnie that asked Audree to dance while at a dance in Hamilton one fine evening in 1954.

“I always said he chased me, but he always said I chased him. He was wearing his Army hat and he tossed it at me as he asked me to dance.” Audree reminisces.

She has a sparkle in her eye as she talks of him and shares fond memories of her beloved.

It was because of Ronnie and his service that she has been so involved in veteran volunteerism for over 50 years.

Mrs. Schmucker has been a very active and dedicated member of the American Legion Woman’s Auxiliary in Pioneer for 51 years, and still continues to be.

“I think I’ve only missed 3 meetings in 51 years, other than for weather,”

That’s beyond impressive. As a mother of 2 sons, and their activities growing up, she found the time to be involved as she had the passion for volunteering.

She was President of the Auxiliary for 8 years and has held various officer positions in the past. She has been active in the Legion’s Poppy program for
several years as she was the chairman for the program. She continues to makes the poppy wreaths for the headstones at Pine Grove Cemetery for the Memorial Day service and continues to sell poppies as part of the
Legion’s fundraising efforts.

“You just can’t say no to Audree” is a common saying among a few of the locals at the American Legion. (This is true as I personally have handed her money for the poppies at the Pioneer American Legion)

Audree and her late husband have played big roles in the fundraising efforts of the Williams County Veterans Memorial Building in Montpelier. She has helped sell over $5,000 in reverse raffle tickets for the Veterans Building over the past few years.

“Ronnie was very dedicated to the American Legion. I will always volunteer for the Auxiliary and the Legion as long as I possibly can. It comes natural to me,” says Audree.

In addition to the Poppy program, she is the chairman for the funeral luncheons and also makes calls to the veteran members when there is a military funeral taking place. In the past, she has organized the Legion Fish Fry dinners and Chicken BBQ’s. It may not sound like much, but for anyone who has helped organize, or worked a fish fry or chicken bbq, will tell you that it is work.

But for Audree Schmucker, it comes natural to help.

“You have to have compassion and humility,” she says as she looks me straight in the eye. “And I just strive to have that, as a volunteer, to do my best. I hope to volunteer as long as I can. We’re a small community and I’ve enjoyed what I’ve done.
“I like to help people and I have a big heart. But I’m just a common, ordinary person. That’s all I am.”

Well, if you ask me, common or ordinary, she is extraordinary.