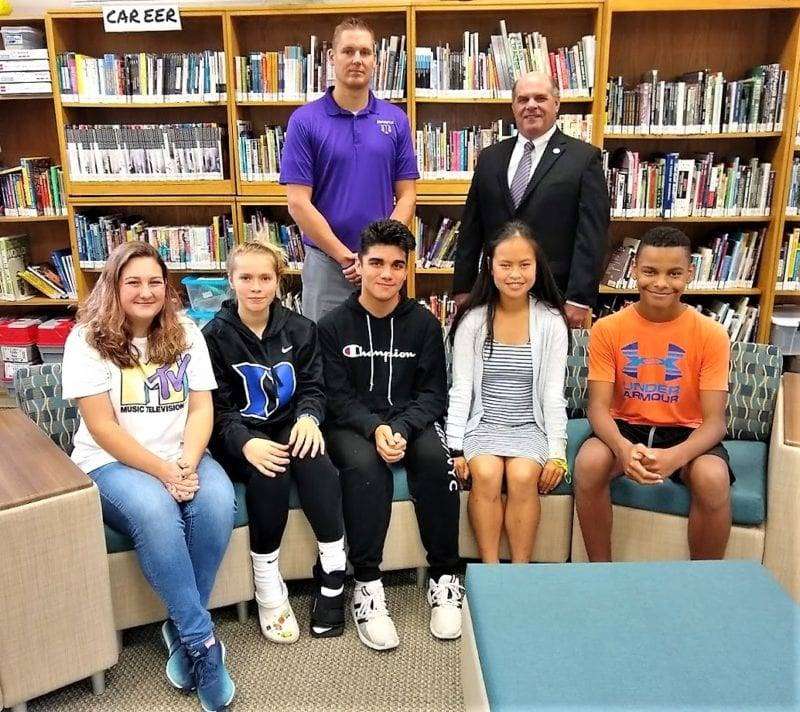 With the resounding year-one success of the Swanton Seven Initiative (SSI), a program designed to teach students essential interpersonal and communication skills to thrive in the working world after their formal education has ended, the Swanton Middle School (SMS) has taken the next major step by holding Career Exploration classes for their seventh and eight grade students. Long-time Swanton resident and recently retired business executive Mike Remer has been hired to build this ground-breaking program from the bottom up and will be teaching the classes as well.

This new concept, having young middle school students thinking of career choices, was brought back by Swanton Superintendent Chris Lake from a local school superintendents meeting held by the Northwest Ohio Educational Services Center (NOESC). The staff at the NOESC were looking for school systems to attempt a program of this type and, of the 23 superintendents in attendance, only Swanton was prepared and in a position to take it on. Working with SMS principal Matt Smith, Mr. Lake posted the teaching position and eventually hired Mr. Remer.

Mr. Remer has an impressive resume which included 30 years as a top sales executive for Hewlett Packard and led sales teams around the world. Closer to home, he and his wife Sue, had four children graduate from Swanton High School and he also served for ten years on the Swanton Board of Education. Adding his one year of substitute teaching at SMS, he was the perfect candidate for the job. The creation of this program and the position, Mr. Remer believes, is a way to build on the Swanton Seven Initiave implemented last academic year by Mr. Smith and further enhance that program as a “natural progression” as he puts it.

After his hiring, Mr. Remer had to create a curriculum complete with a syllabus and lesson plans based on primarily what he thought would work. “I’m teaching four classes per day, four days a week,” he explained. Three periods of eight-graders right now and one seventh-grade and then next semester it will flip flop.” The foundation of Mr. Remer’s teaching is basically the name of the class, career exploration. “It’s based around the three E’s. Once you graduate from high school you have the option of doing one of the three E’s, Education, Employment or Enlistment. So, I’m covering all of those.” As part of his teaching he wants the students to realize that there are no limits on any “E” they chose and there is nothing wrong with changing direction.

Having 12 and 13 year-old students contemplate possible career choices is almost unheard of but that is the new world at Swanton Middle School. It meshes very well with the SSI in preparing tomorrow’s workforce. According to Mr. Smith, feedback from the business world on how unprepared high school and even college students are with respect to interpersonal and communication skills is alarming and the Swanton School system is responding. “What we’re finding is that here is a disconnect between education and business and we’re trying to bridge some of those gaps,” said Prinicipal Smith. We’re trying to, at the very last minute, junior or senior year, talk about these skills. But it’s just like reading or math. We need to give them a baseline, a foundation to build upon and then we can hone those skills in high school.”

One of the first projects Mr. Remer’s students were tasked with was deciding what their “dream job” would be then to do thorough research on what it would take to live that dream. The results were very eye-opening for the young scholars. Mr. Remer also plans to get the students out of the classrooms to visit area businesses, trips he refers to as the more professional “site visits” and not field trips. Mr. Smith added the program also encourages in-school visits from area business leaders and professionals who would come in and give insight into the workings and reqiuirements of their particular business or profession.

The two programs at SMS are still in their infancy and in breaking away from the teaching and educational norms, both Mr. Remer and Mr. Smith know it will be some years into the future before tangible results are realized. “The stuff we’re deciding on right now, we’re really not going to know the full impact for 10 to 15 years, maybe,” said Mr. Remer. “The fact that Swanton is pushing the start button on this is incredible to me. The leadership we have right now is through the roof. And that’s one of the reasons I’m excited about doing this.” The Swanton Local School District is blazing a trail by incorporating the middle school students into their career oriented programs and more and more local businesses are getting on board and becoming involved.