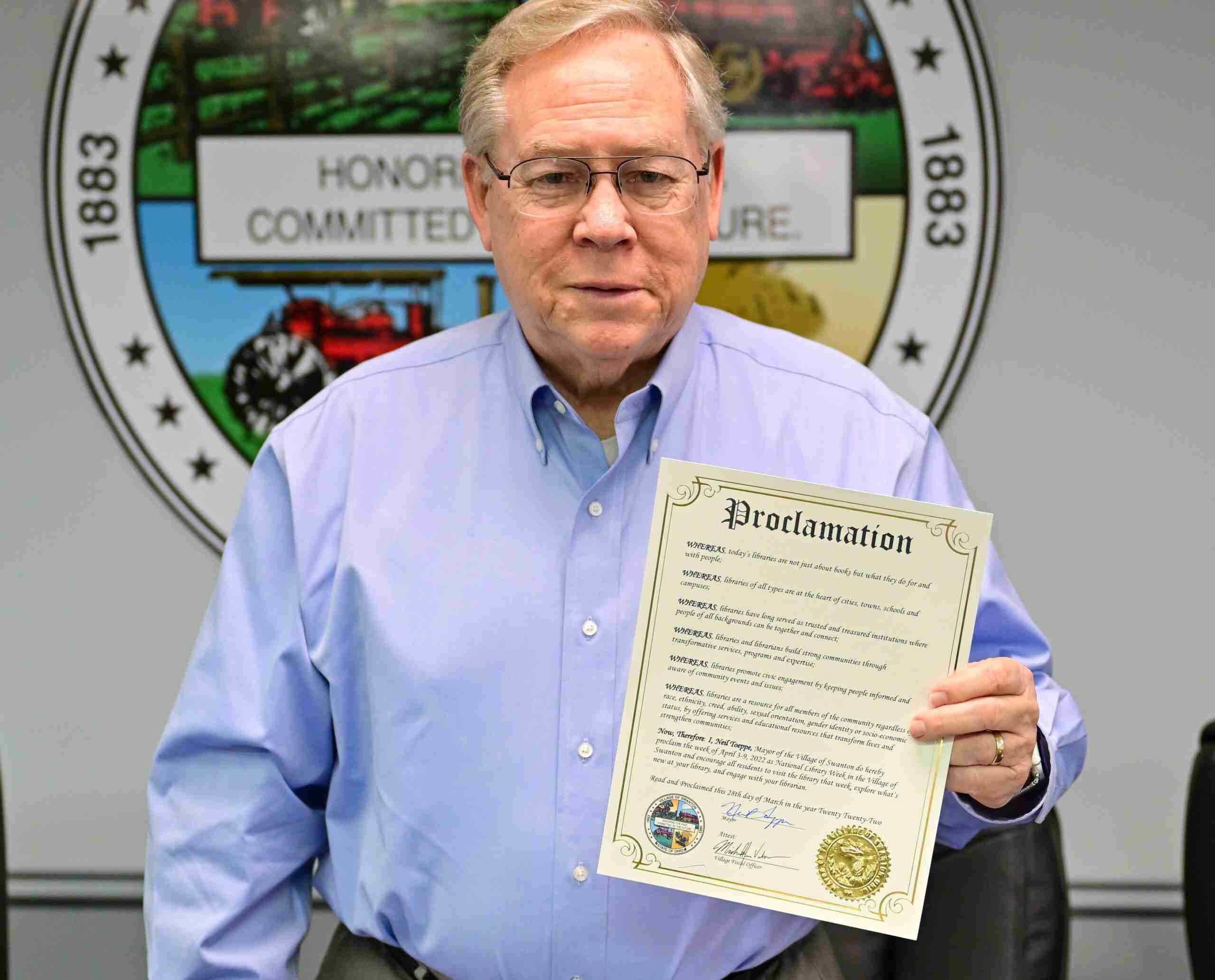 PROCLAMATION … Swanton Mayor Neil Toeppe holds up a proclamation made for the Village of Swanton to make the week of April 3-9 National Library Week. (PHOTO BY JACOB KESSLER, STAFF)

The Swanton Village Council held their meeting on Monday, March 28th. The meeting was called to order at 7:00 p.m. followed by a prayer and the Pledge of Allegiance.

Council first moved to approve the agenda as presented as well as the minutes from the previous meeting that took place on March 14th.

Committee reports were then heard with Public Service issues being brought up first. The lead and copper rules of revision was discussed first with it being stated that the project will be extensive and major due to the lines that need to be looked at.

It was also stated that a fair number of lines that have already been looked at have been ruled as ok. Work is being done to look into a state grant for the project as well.

Crews have been working on mulch beds around town to get ready for the warmer weather. The active transportation plan was also discussed with it being stated that ODOT has just opened grants for this which the village will be applying for.

Public Safety matters were discussed next with it being stated that the liquor permit review was conducted and that everything looked ok.

The issue at 98 Dodge was also addressed again with the committee reaching a decision on the mater.

Next, the live streaming policy was discussed. At a previous meeting the item was on the agenda but had to be stuck off the agenda due to not receiving an updated policy to vote on.

The policy had been referred to the Solicitor who was still making changes to update the policy.

The newly updated policy was received by council with Councilman Kania stating the changes were significant, but good. A motion was made and approved to allow for live streaming to take place in the future.

The equipment for this has been ordered and will be installed sometime after being received.

An Emergency Resolution authorizing the submission and support of an application to the State of Ohio Environmental Protection Agency.

Mayor Toeppe then gave his report with him first telling council that he had met with a representative from Toledo Metro Parks.

The two talked about many things including an active transportation plan. The hope is to possibly see a bike connection from the village into the park in the future.

The topic of putting signage up at 64 and Airport pointing to the bike trail, the tree house community and some fun things to do in the village was also talked about.

HB 512 for the Fire and Police pensions and HB 519 will both be heading to committee hearings in the State government.

The search is still on for a new Fire Chief with numerous applications being received. Five will be chosen for interviews with two or three being chosen and introduced to leadership at the Fire Station. It may be possible to have a chief chosen before the next council meeting.

The Administrators report followed after with the new Finance Director Jason Vasko being introduced. The administrator then thanked everyone for their help with the clean-up at the park.

The zoning change request for 213 North Main has been rescinded by the owner due to her selling the property. On April 11th, a photographer will be on site to take head shots of the new council members.

The planning commission meeting was cancelled for April due to there being nothing submitted for them to review. The Tree Commission did not meet in March, but there should be a meeting in April.

Construction is now happening on West Garfield. It is happening three weeks early and will be inconvenient for residents. Door hangers were placed at addresses who are affected.

The work for meter change overs has continued with only 21 now remaining to replace. CT Consultants is still working on a rough draft for the codified ordinance review and the sidewalk improvement program is still going on as planned. Address changes are still ongoing as well.

Mayor Toeppe then read a proclamation to make the week of April 3rd to the 9th National Library Week.

Council then moved to enter into executive session at 7:29 p.m. Upon their return, council moved to adjourn for the evening.