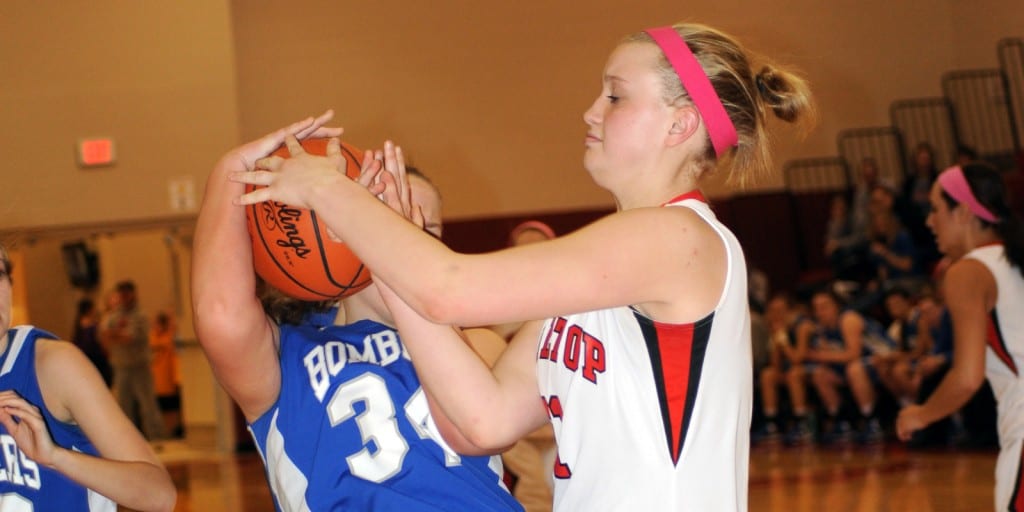 WEST UNITY – In local hoops circles, the name Sydney Stoll is frequently heard when speaking of excellence. Although her name is well known in Cadet Country, the Hilltop faithful will be quick to add names like Hannah Bleikamp, Sam Lillemon and Jackie Smith to the list.
When Stoll and her Edon Lady Bomber teammates invaded The Bunker on January 17, they found Bleikamp, Lillemon and Smith awaiting with the rest of the Hilltop Lady Cadets. Stoll connected for a game-high 15, but there was simply too much Lady Cadet power to overcome as the Lady Bombers left town on the short end of a 49-32 decision.
The Belles in Bomber Blue were at an immediate disadvantage as Hilltop had a height advantage at nearly every position. Factor in advantages in speed and experience, and the downhill spiral for Edon began with the opening tip. Hilltop opened with a 14-5 run, and never looked back after taking a 32-16 lead at the break.
Bleikamp lit up Edon for 14 points, while Lillemon had 12 and 9 boards, and Smith added 11 points and 10 rebounds. Emily Armbruster finished with 5 points, LeAnn Joost had 3 points, Kelly Geis drained a pair of free throws, and Cierra Carpenter had 2 points, 13 assists and 6 steals.
Stoll struck for 15, while Kaitlin Sonneberger and Andrea Headley each had 5 points for Edon. Mihkaya Best lifted 3 points, and Hannah Brehm-Gutting and Alex Kiess each had a deuce.