“The Mat Weaver Ministry” To Homeless – Thriving In NW Ohio 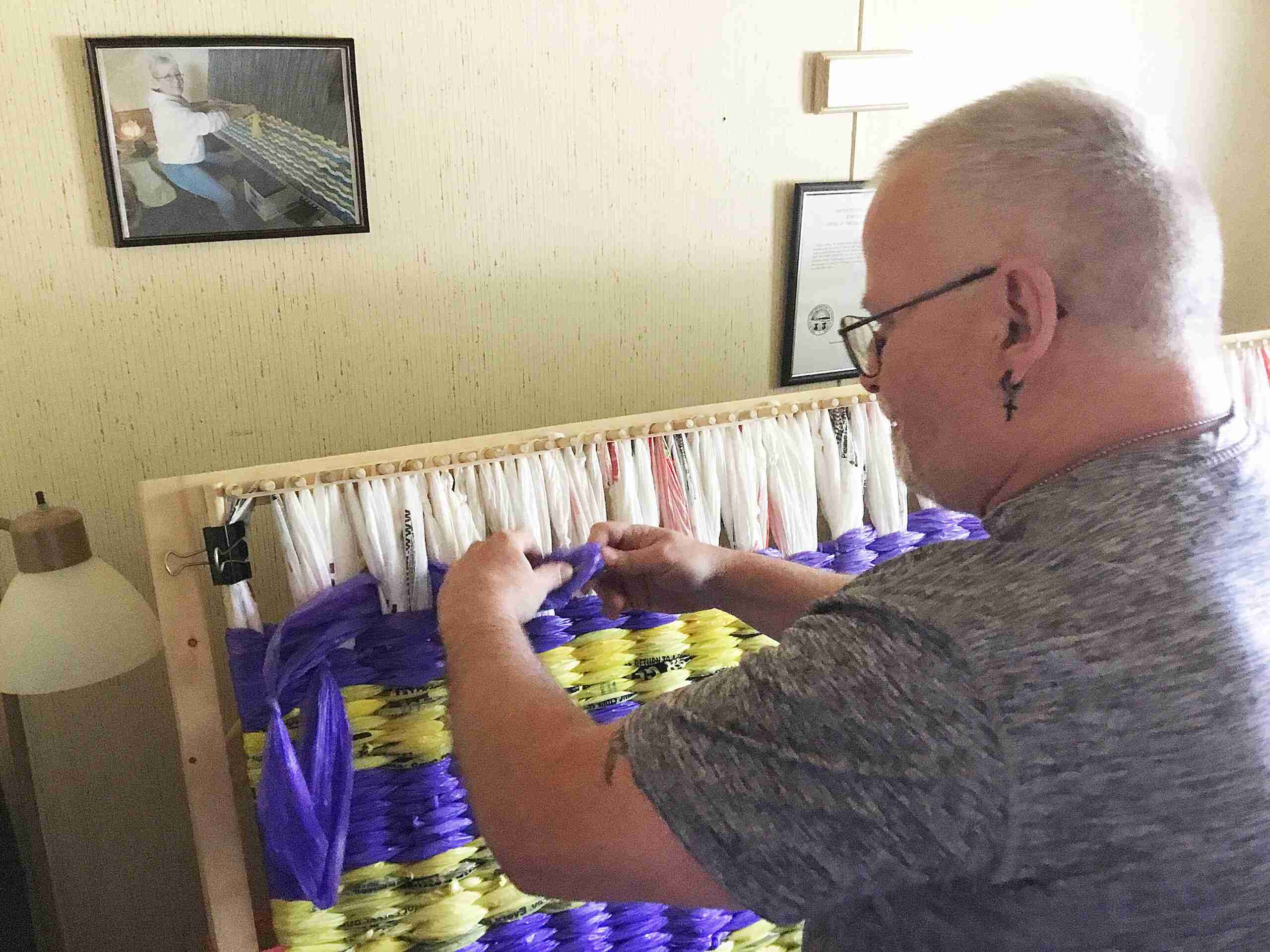 HARD AT WORK … Bob Dewille absolutely loves weaving mats for the homeless and giving them out. Recently he and his weavers have started choosing colors instead of just grabbing whatever bag is next, giving the mats a very personalized feeling. (PHOTOS BY REBECCA MILLER, STAFF)

Bob Dewille has been interviewed and had articles in numerous newspapers in the area, including the first one in The Village Reporter, over the past six years, but it seemed to be time for an update.

Much has happened since this ministry began, and Bob is thrilled to let folks know about the changes.

Before the update, a brief history of “The Mat Weaver Ministry”: Bob has lived in West Unity for the past 12 or 13 years, moving there from Van Wert. In 2005, he got hurt on the job when some freight fell on him.

Due to the number and severity of the injuries, he ended up on disability, feeling worthless. “I began to pray to God asking for something to do that would give my life meaning,” Bob shared in an interview.

Soon after he prayed, a friend from his childhood called him. “Missy McLaughlin, who had known me since I was a child, heard about my situation. She called me and said she had an idea to run by me.”

Bob went to see his 92-year-old friend, Missy, who was living in a nursing home.  She asked him to look in a trunk in her room and it was full of crocheted sleeping mats.

“How would you like to have your life mean more at the end than in the beginning?” she asked him.

She had been crocheting sleeping mats for homeless people. She just sat on her bed and made them. She taught him how to crochet the thin, light mats.

“I came home and started doing them on my own, Bob said, “but I didn’t enjoy crocheting. I started thinking about when I was a child in the Boy Scouts and we learned how to weave baskets out of palm fronds.”

“I wondered if maybe I could weave these mats instead of crocheting them.” Of course, palm fronds are not available in NW Ohio, but plastic grocery bags certainly are.

His choice to use plastic bags is hailed as a great help to the environment by the environmentalists and the EPA, an added bonus. He has upcycled 2, 227, 000 bags in the past six years.

In 2017 or 2018 he shared his ministry with Pastor Greg Coleman who was the pastor of WU United Methodist at the time. Coleman had been in construction so he grabbed onto the idea of a loom and built one for Bob to use in his home.

Bob taught himself how to weave, no books, no google, no teacher, just looked at it and figured it out. The first few mats were pretty rough, he remembers, but by the third one he was starting to get a handle on it.

In his words, “A monster was born and I started weaving like a maniac.” Pastor David Mathis, who was the pastor of Living Hope Free Methodist in West Unity, saw him weaving outside one day, and offered to have his congregation save their bags for him. It snowballed, as more churches joined in the mission, to the point that he had too many bags!

About four years ago, Larry Eicher, an older resident of West Unity at the time, asked if he could weave mats for veterans in honor of his grandson who died in the war. Pastor Greg made him a loom, too.

“We became great friends,” Bob shared, “and when he passed away it was hard. I miss him so much.  At the end he was cutting bags because he couldn’t weave anymore.” Eicher told Bob before he died, “Thanks for giving me a reason to live and helping my life be worthwhile. When you grow big, remember little Larry Eicher.” He died the day after his 80th birthday.

“Since he died, I have pretty much carried on alone, except for all the great help from my friend Cathy Ayers.” Cathy cuts the bags by the hundreds and gets them ready so that Bob can focus on the weaving.

She does some weaving as well, but prefers to do the bag cutting instead, averaging around 1500 a day. It takes 1500 bags per woven mat, and Bob can make one in 12 hours on the loom.

In August of 2019, “The Mat Weavers Ministry” got a 501c3. A good friend from Defiance who was retired and has a wood shop, wanted to make looms for him.

All these years Bob had been brain storming how to make them even more efficient. He made some adjustments, making them rotate in and out according to height, and easier to take apart and transport.

His Defiance friend, Terry, built six more looms for him. Two went to Oklahoma to White Horse Ministries, Bob has one, Rich Ebersole in Sevierville, Tennessee has one, and Jack Dean (who works at 20/20 Custom Plastics, more about that later) from Bryan, Ohio, has one. The last one went to Cindy Diller, in Stryker, who has been “a great addition to the story.”

“Cindy has become my right hand now” Bob said. “She is doing great, like Larry did! Cindy has taken Larry’s place for me. She is a valuable asset to the ministry and a good friend.”

Cindy has people who are bag cutters for her as well, so he doesn’t have to keep her supplied with bags. Both he and Cindy have large clean trash bins at their homes for “no contact drop off”, which he started when COVID hit.

Now the whole area drops off bags.  Cindy absolutely loves weaving the mats and shared how she got connected. “One of my friends on FB was asking for bags for the Mat Weavers Ministry so I looked them up.”

“Since I retired, I have been looking for a way to give back. Homelessness has always been on my heart ant through the years I have instilled that in my kids and grandkids hearts and have always helped when I could.”

“So, this seemed a perfect way to help. I love all the things that people do to help Bob help the homeless. It is such a blessing and I am so glad he has let me join in making mats.” 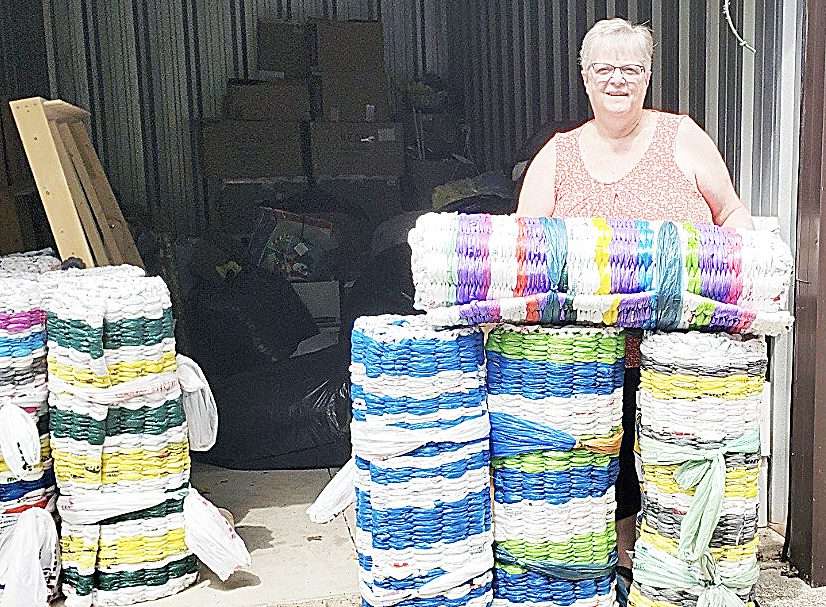 “I feel the only thing God gave us was kindness and we have to be kind and love one another.”

Besides making and giving out the mats, The Mat Weaver Ministry gives out a number of other needed items to the homeless people they meet. “Miracles have happened,” Bob continued.

“I took a chance and wrote to the Bomba Sock Company and they started sending me 100,000 pairs of socks per year, a few years ago. So the homeless are given a mat, six pairs of socks, a Mylar space blanket, hand and foot warmers, shampoo and soap, underclothes, deodorant, coats when needed, boots, a two man tent, hats, scarves and gloves when needed (which are made by Edgerton resident Angie Wank who is disabled also),… “just about anything needed!”  It is all kept in a storage unit across from the park.

Besides all these great necessities, they are also able to give each person or family an Audio Bible, provided by

“Faith Cometh by Hearing”, a ministry who manufactures solar panel audio bibles. They send him 300 every three months. “The audio bible is a little thing about the size of the phone that they can recharge,” Bob explained.

Another wonderful gift they have experienced came from 20/20 Custom Plastics. As mentioned earlier, one of the weavers, Jack Dean, works at 20/20 and when his company found out about this great recycling effort, they donated $1000 to the ministry. Bob exuded his joy and pleasure at how so many are getting involved.

The Mat Weaver Ministry has now personally helped over 1000 homeless people in the past six years. They have visited and blessed the homeless in Ft. Wayne, Michigan, Defiance, Chicago, and other cities as well as given them to Habitat for Humanity, United Way, and Red Cross.

He keeps photo albums of each one to whom they have given personally and can rattle off the stories of each of them.

I love making a difference in peoples’ lives and wish I could do more!” Bob said.  One of the hardest parts of being in ministry is cost.

Last year, 2021, he got around $4000 in donations and the rest comes out of his pocket. If this sounds like something you would like to help with, you can send donations to “The Mat Weavers Ministry”, 503 ½ West Ring St., West Unity 53570, or drop it off at the Huntington Bank in Montpelier, Ohio for the Mat Weavers Ministry (tax deductible).

If you are homeless and could use some help, Bob Dewille can be messaged on Facebook.