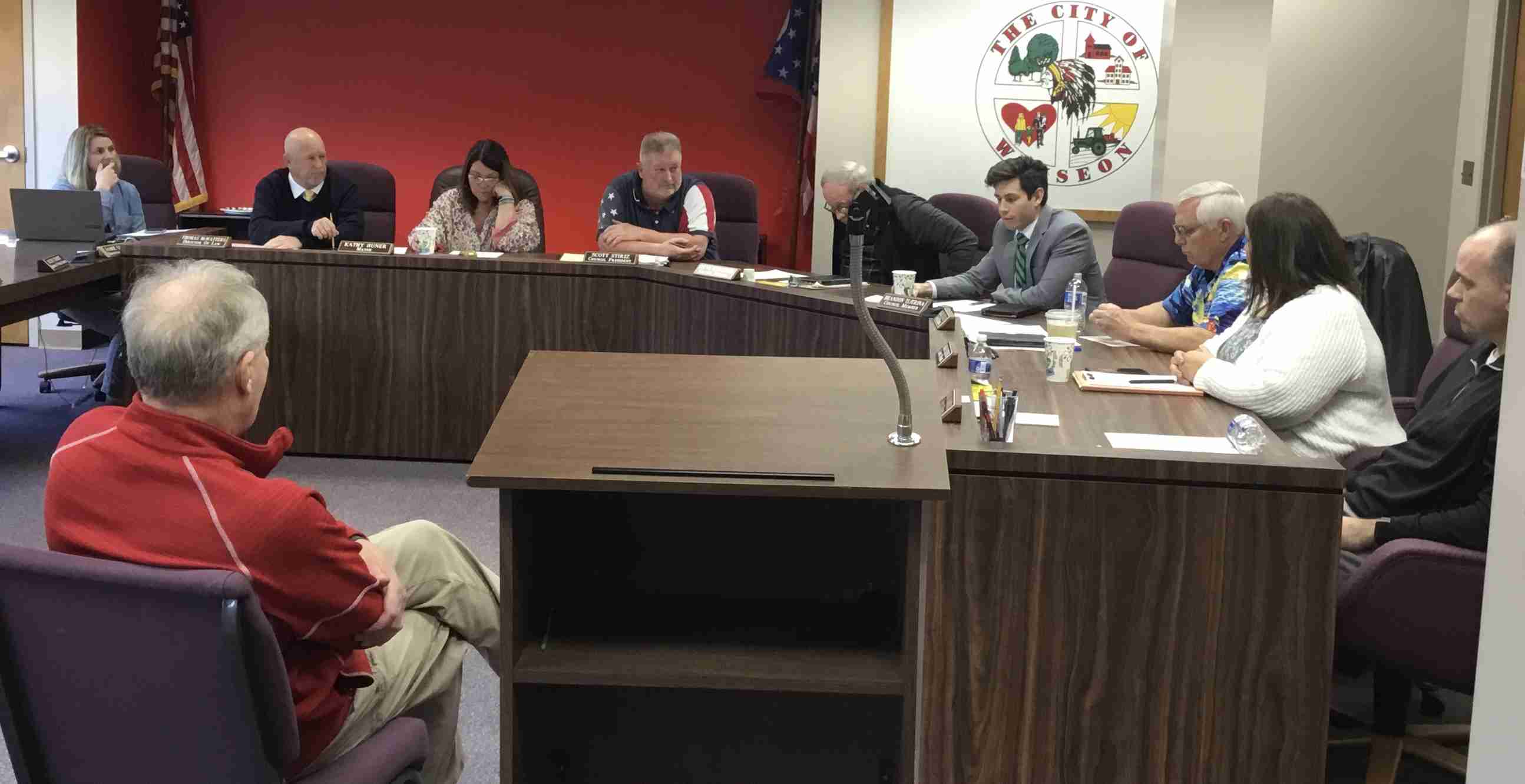 Wauseon resident and Levy Committee member, Paul ZumFelde, addressed Wauseon City Council at the March 4, 2022 council meeting concerning what will happen if the school levy does not pass.

His question was, “What do you think, if on May 3rd this levy does not pass, the impact will be on the city of Wauseon and your roll as the leaders of this town?”

Mayor Kathy Huner clarified that she, on behalf of the city, and the council have to represent all the voters whether they are for or against the levy. She then stated that in the past there was a division concerning the water line to Napoleon in 2002, but “we came to the end of it and we survived.”

She then focused her answer on economic growth, saying that they are always looking for and hoping for economic growth. “We hope people would want to come into the city. The three biggest things people ask about when considering moving here…churches, businesses and schools.”

Her point was that they will work hard with the budget to continue economic growth no matter what happens with the levy.

Each of the council members shared their thoughts, but the concept kept coming up that they really couldn’t share their personal feelings as they have to represent the people. Those who are seniors mentioned the fact that they don’t have to pay it.

Director of Law, Tom McWatters, encouraged council to keep it from being personal thoughts and to stay with their positions as council members.

Council President Scott Stiriz spoke briefly saying, “We are retired so it is not affecting my income so it isn’t my right to tell those who are struggling how to vote, so I am trying to stay out of it. I can see it both ways.

ZumFlede said, “We voted for school issues when we were young, knowing it would be hard but it was for the betterment of the community.”

Council member Steve Schneider stated that it might be better if everyone had to pay. Younger member, Brandon Tijerina, added, “We have families here that had to open accounts with the Attorney General to pay their taxes, and how is it fair to those people to have to tack on more taxes?”

“But then we have those who are heavily involved in sports and other things at the school, how is it fair to them if it doesn’t pass?”

“Everything is already so high for groceries and gas, but I think there are a lot of things in the school that can be done if it doesn’t pass. Correcting processes will help the school.”

Other thoughts that came up in the discussion were whether people will move away either way it goes and how it may seem unfair to have those who can vote but not pay.

They re-worded the question to be “What would the council do on behalf of the city, if the levy does not pass?”

Harold Stickley said that he called Ohio Ethics and as council members they have to be very careful on speaking to this question.

So, he continued, “as a city if it fails, the city will lose some parts of the Rec Department as there are certain coaches and things the school does for the city, that will be lost for the youth if it does not pass.”

“They will also lose the utilization of the school for practices.” But he added that if they don’t have good schools, his personal opinion is that the city will lose.

Council member Sarah Heising shared that “She could easily bundle her personal and council member thoughts, because no matter what happens, somebody loses. ”There is no path where everyone wins and that is the sad part.”

She stated a few things others had mentioned for both sides, and said she understands it didn’t happen overnight.

Mr. ZumFelde said, “Everybody has to win eventually, don’t we? Nobody wins if we don’t all win, and right now it is a critical time and I am asking from deep down if those people who are suffering economically could please use the services and resources available to them to get through the next few years.”

Council member Shane Chamberlin spoke last on the topic, stating, “I think from the city perspective, one of our chief responsibilities is to set a budget. Legislatively, we are responsible for the setting of the budget. So, like anything within our community, it’s like a marketplace.”

“We are asking Jamie (Director of Finance) to keep an eye on things financially, so we can make good decisions when it comes to setting the budget. I think this would be no different. I would expect our finance director to keep a close eye on our income and we would legislate accordingly.”

“Thank you for your service to the community,” ZumFelde said and thanked them for their time.

In regular business, council voted to approve the Minutes for March 7, 2022 and Committee of the Whole on March 17, 2022 as well as Resolution 2022-5 “A resolution authorizing the mayor to enter into an electrical supply agreement for the various municipal locations, and declaring an emergency.”

They also approved the payments of bills and a motion to accept the Mayor’s appointments to the various boards and commissions, with a specific appointment of Dr. Kenton Kamp to the Fulton County Health Department Advisory Board, for a five year term.

President Scott Stiriz reported on Tree Commission Meeting and WRA Meeting, as he is on both committees.

Tree Commission met on March 14, 2022 and he reported to council that the trees on Burnell St. that needed to be removed have been done. Tree City USA is scheduled for May 11 in Findlay.

Wauseon Recreation Association (WRA) met on April 3, 2022 and between the CD and the Checking account the group has around $55,000.

That will need to be used for equipment and uniform costs. Spring sports traveling teams have been set up. He also mentioned that if the levy does not pass, they will have to make some adjustments.

Director of Finance reminded everyone that tax forms are due by April 18. Director of Law said they are still working on negotiations with the police department and they should have if finalized by the next meeting.

Council member Stickley commended the police and fire departments for the way they handled the tragic car accident on County Rd H and 14.