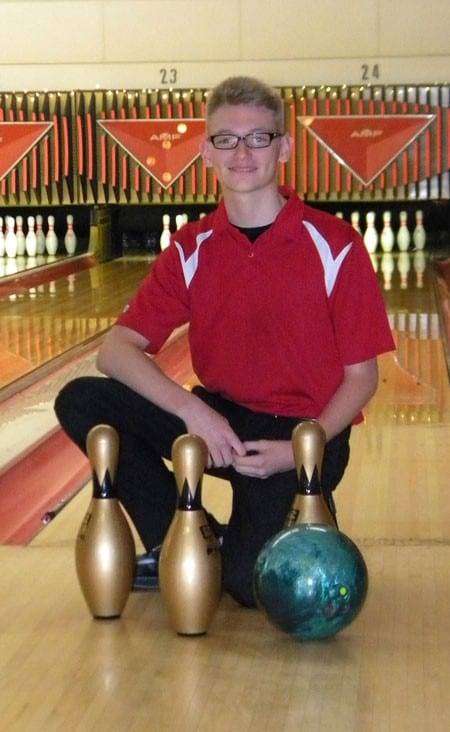 By: Bill Bray – THE VILLAGE REPORTER

It has only been a few short years since the sport of bowling was recognized as a “league sport” in Ohio High School Athletic circles. In that time, no one in the Northern Ohio High School Bowling Conference has rolled to perfection, until now.

Nicolas “Nic” Kearney of Wauseon delivered a perfect game a few weeks ago in a match against Liberty Center. It was the juniors first-ever perfect game and obviously one he will remember the rest of his life.

Kearney was introduced to the sport early in his life by his parents. “A lot of the time I would go and practice with my parents just for fun as a kid,” Nic said. “Once I started bowling in leagues I remember bowling Saturday mornings in the “prep” league with my sister when I was 12.”

His love for the sport was evident with all those Saturday mornings growing up, and no one was happier than Kearney when Bowling was added to the winter sports line up. “I know when my dad bowled in high school it was a club so I am very grateful that it is an actual sport now.”

Kearney does much of his studying at Northwest Community College but he still attends the high school to take part in the music program as a member of the band. “I am taking three classes there (Northwest) a semester,” Nic said. “Possible paths I have are going to college somewhere else and bowling, or taking a scholarship program through North Star Bluescope Steel for Electrical Engineering.”

Bowling was obviously the first sport Nic remembers but it certainly is his favorite one. “Bowling is a very technical sport” Kearney said. “It takes complete focus and control to do well. I also like meeting other people at tournaments. It is nice to share the same interests I do.”

Kearney has been fortunate enough to be under the guidance of Wauseon bowling coaches Chuck and Pat Carr. Carr’s reside in Wauseon and have a passion for the game of bowling. They have spent a number of years shuttling young bowlers back and forth in Fulton County since Wauseon’s beautiful lanes is a ghost town.

“I’ve known both “coach Chuck” and “coach Pat” since coach Chuck started teaching me when I was in the sixth grade. By the time I made it to high school I had already developed a good “game”. Coach Pat helps me stay focused on my game and she’s always there if I have a question or need advice”

It was a day and a game that the young junior will remember a lifetime. It is not everyday that a bowler has to recollect what they were thinking as the game began to unfold. It is common amongst the better bowler to begin with three or four or more strikes in a game. But Kearney’s “perfect” experience in fresh in is mind. “I don’t know if this is for every bowler but it is for me, Kearney explained. “Every time I start a game with a strike my goal is to strike out, “Nic” said simply. “To bowl a 300 has been my #1 goal since last year, because I knew I had the experience and skill to do it. So up until the 10th frame I forced myself to focus on me, and nothing going on around me. I threw my shot then walked back to my chair and stared at the bowler’s score screen to my right. Once I got to the tenth it hit me and I said to myself, “Focus and do it for yourself”. And I did it.”

But as focused as Kearney was at the time, when the feat was accomplished he was overwhelmed. “Once I let go of that last ball I knew it was on line and had a good chance. I just hoped… And when it struck all of the emotions hit me all at once and it was hard to even stand.”

With the 300 now behind him, Kearney’s confidence is peaking even though it is only his junior year. “ I want to be bowler of the year again this year, I currently have a 217 average and Clayton Stemen from Tinora has been bowling really well so far with a 219 average.

Kearney and Stemen are indeed the class of the field. They sit in first and second spot in every individual category shown on the league site.

Kearney has another year to have future plans really, but the organized young man knows his hopes. “I’d love to bowl in college, but I will for sure bowl in leagues and possibly tournaments after my high school career is over.”

More stories are sure to come about this young Wauseon Indians’ bowler. In the meantime here’s hoping that more perfect games in all segments of his life will follow.