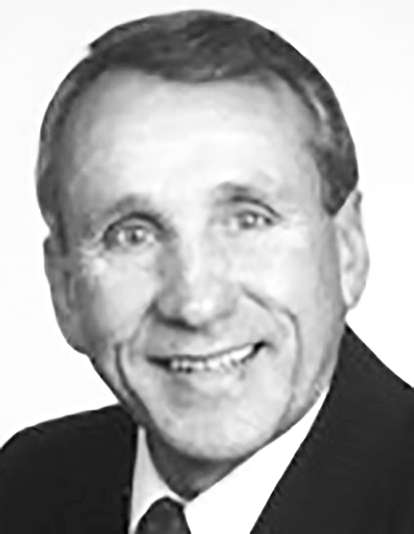 Mr. Ruffer was a 1948 graduate of Ridgeville High School and joined the United States Air Force in 1952, earning his wings in 1954.

He began flying B-26 aircraft in Korea and then went on to serve in Japan and the Philippines.

During his tour in Japan he flew and trained other pilots in the B-57 for missions into Vietnam.

His second tour in Vietnam he flew the C-123 into obscure bases in Vietnam, moving civilians from places of danger to places of safety.

His last mission in the C-123 was flying from Vietnam to the “Bone Yard” in Arizona, retiring the plane. He ended his military career in 1973 as Lieutenant Colonel with twenty-one years of service.

He moved to Bryan in 1973 and worked for several years for the United States Postal Service in Bryan and Archbold.

Bill got into real estate working for Strait Realty. He and his partner, John Zachrich, bought the business in the early 1980s and soon became affiliated with Coldwell-Banker.

He would later buy out his partner and continue in the business working along side his wife, Carol.

Throughout the years he was an active member of the Northwest Ohio Board of Realtors, serving as president in 1988, and was a member of Bryan Rotary and past board member and president of Bryan Chamber of Commerce.

An avid golfer, he was a member of Orchard Hills Country Club and had three holes-in-one and shot his age twice.

William R. Ruffer was born on December 11, 1930, in Fulton County, Ohio, between Wauseon and Delta, the son of Paul M. and Helen D. (Moll) Ruffer.

He married Carol M. Dehnbostel on April 25, 1959, at St. John’s Lutheran Church in Freedom Township and she survives.

He was preceded in death by his parents; two brothers, Richard and Kent Ruffer; and one sister, Mary Lou (Penrod) Nemire.

In keeping with Bill’s wishes, there will be no visitation or services at this time. Grave side services and interment with military rites will take place in Arlington National Cemetery at a later date.

Memorials are requested to the Alzheimer’s Association.