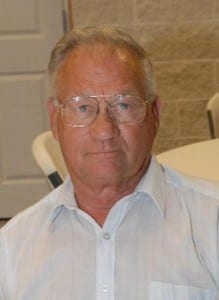 William E. (Bill) Kissinger of Edon, Ohio passed away at his home Saturday, March, 23, 2013. He was born July 24, 1935 in his parents’ home near Blakeslee, Ohio to Maxine and Burton Kissinger. Bill is survived by his loving wife Phyllis Irene (Maginn) Kissinger, to whom he wed over 56 years ago on July 17,1956.

The active, lively, and ornery individual will be greatly missed by his nine grandchildren, their families, and eight great grandchildren. Grand-daughters and their families include; Alysia (Brown) McHenry and her husband Brent who have three daughters: Anna, Lydia, and Eva. Nikki (Hollinger) Thrush and her husband Nick who have two children: Colton and Chloe. Kayla (Brown) Floyd and her husband Shawn. Jessica (McCrea) Wehri and her husband Ryan who have one son, Abel. Paula Hollinger and her fiancé Brad Laucher. Shantel Brown and her significant other Zach Hook, and Anndraya Casper. Krista (McCrea) Terrill and Ron White who have two children: Annika and Aiden. Holly (McCrea) Miller and her husband Brandon who have one son, Parker. He is also survived by two sisters: Mary Lou Miller and Pat Herman and one brother, Richard. He is preceded in death by a daughter, Cindy Lou, his parents and two brothers: Donnie and Robert.

Bill was a caring husband, loving father and affectionate grandfather. An avid outdoorsman, he enjoyed fishing, camping, animals, softball, and watching his “girls” play sports. His passion truly was his family.

He was a long-time Edon Church of Christ member and attended Life Changing Realities Fellowship, a well-known presence in the community and a friend to many. In his spare time he enjoyed many western movies, listening to country and western music, bowling, and dining with his wife and friends.

The viewing will be held at Krill Funeral Home in Edon, Ohio Wednesday, March 27th from 2-4 P.M. and 6-8 P.M. Services will be held at 11:00 A.M. on Thursday, March 28th at Life Changing Realities Fellowship in Edgerton, Ohio. Interment will be in Edon Cemetery.

In lieu of flowers, condolences may be sent to the family who wish to memorialize Bill at a later date.

To sign the online register or to send condolences, please visit www.krillfuneralserevice.com.