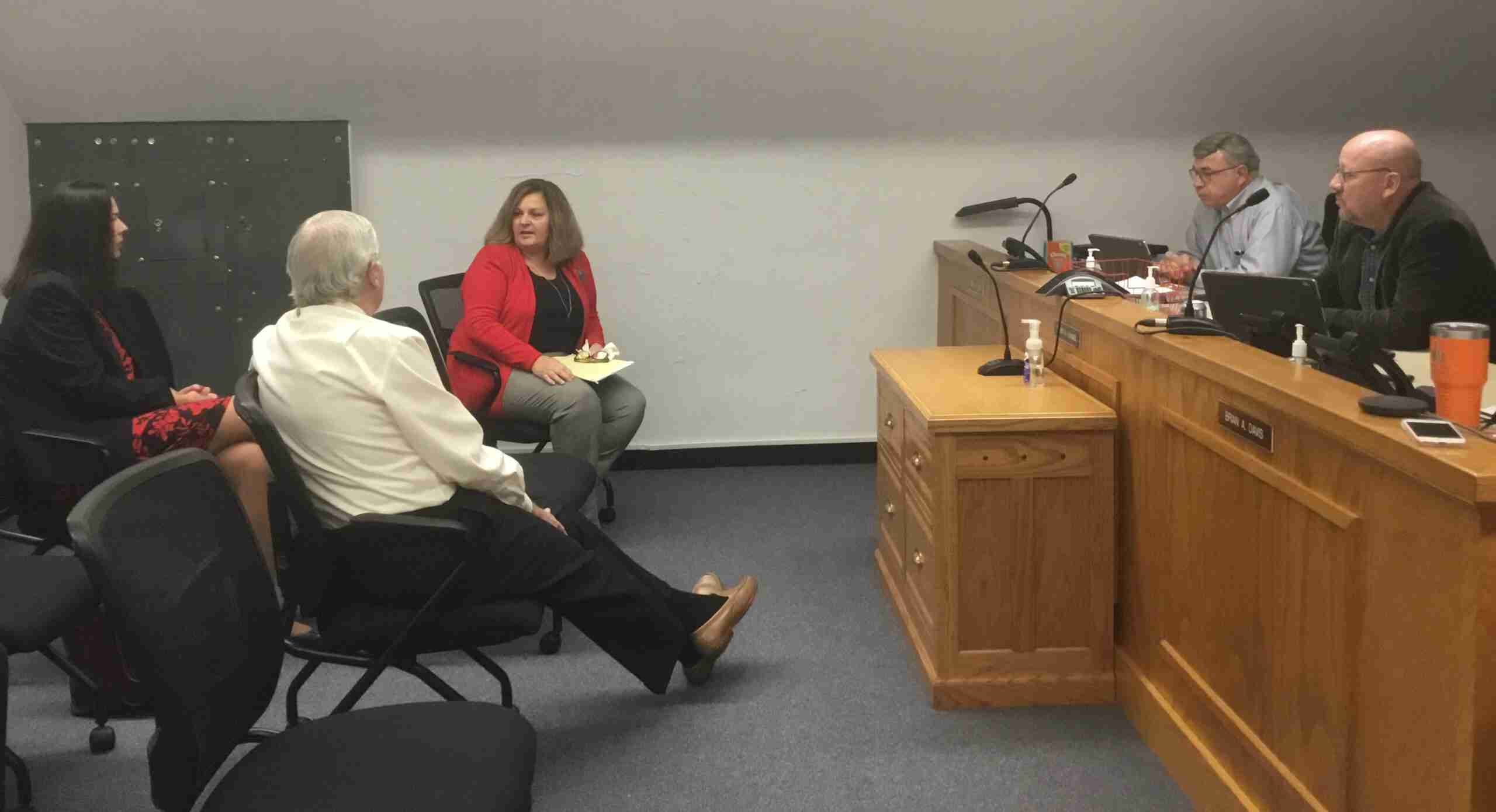 DORA DISCUSSION … Bryan City Mayor Carrie Schlade is seen in the Commissioners chamber with Judges Karen Gallagher and J.T. Stelzer to address a misunderstanding concerning the DORA district. The Judges do NOT have any concerns at this time that the DORA is disruptive to the business of the courts. (PHOTO BY REBECCA MILLER, STAFF)

“Happy Trails to You” could have been sung at the first half hour session of the day, 8:30 a.m., on Monday, November 8, 2021, when the Williams County Commissioners signed the deed accepting a land transfer from Northwest Ohio Rails to Trails (NORTA).

County Engineer Todd Roth addressed the Commissioners on behalf of the assembled group, saying that it had been a long process, to create the partnership with NORTA and everyone else who are already partners in the program.

“We are looking forward to the partnerships to the east with other communities and organizations,” he said before inviting NORTA president Ed Snyder to introduce the members who were present.

It was evident that the transfer of this deed to the Village of Montpelier and to Williams County was a momentous occasion for all present to observe.

Roth explained the paperwork that was there to be signed, stating that the deed is split into many parcels. “That was one of the the things that took some time, going through the old deeds and getting the parcels created, working with Ed Snyder to get it prepared.”

It was also clarified that the deed reads, “subject to pre-existing easements” as well as covenants that have been established with NORTA to go with the deed, and the Naming List that is to carry on with the section that the county is accepting.

Commissioner President Brian Davis asked if the Board was in agreement to sign and execute the document, and upon the agreement of Commissioners Lew Hilkert and Terry Rummel, in the presence of a notary (Clerk Robin Kemp), President Ed Snyder signed the deed and Brian Davis signed the conveyance paperwork.

President Davis stated, “We stand in recess,” but a number of other people desired to speak about this accomplishment, and did so off the record.

Commissioner Rummel told him Thank you and Roth added, “Speaking for the Park Board, we are excited as well. One of the first things we will do is drive it to see what areas need what work and maybe present a list of priorities to the commissioners for the Park Board to take on.”

There are members of NORTA that are ready and willing to help, and Randy Miller who has had a great hand in this happening, but could not be present for the deed signing, will be available to the Park Board for questions and to help as well, Snyder pointed out.

Other partners include Wauseon, Whitehouse, Maumee, Toledo Metropark District and Lucas County, with Montpelier and Williams County joining by this signing.

Snyder said that NORTA still has in excess of twenty miles of land and will be around for a while, planning to stay involved as much as desired.

Roth also said that the county will be able to use the trail as a “training facility” for large equipment, which will accomplish a dual purpose.

Montpelier Council President, Chris Kannel, added, “For Montpelier, we are excited about the increased level of partnership. It is just in the last few years that we have become more and more connected with NORTA.”

“The opportunity to work together with Todd and his crew and the other opportunities that it has regionally, such as the one we had a few weeks ago about some of the larger regional opportunities like the North Country Trail. We look forward to really cementing that partnership with the county as the county and Montpelier own parts of the trail now.”

Thoughts that it is ready to be used immediately, the value of working together and having 63 miles of trail were also mentioned by NORTA members.

Yes, more development will be done, but it is already a “win/win” for everybody in the room. Shaking hands all around the public dispersed before the next session of the Commissioners was held at 9:00 a.m., and the Montpelier Village officials accompanied NORTA President Snyder to Lawyer Chris Walker’s office to sign the deed for the Village of Montpelier.

The 9 o’clock session was scheduled to talk about DORA (Designated Outdoor Refreshment Area). Bryan Mayor Carrie Schlade, Judges J.T. Stelzer and Karen Gallagher, as well as Debra Beevers, Bart Westfall and others were present for this session.

As Mayor Schlade had requested the Open Session meeting, she was invited to speak first and began by saying,

“First of all I would like to thank you for the opportunity to speak to you today. Secondly, I think if you watch the BMU recording of the Cty Council meeting, I don’t think it was as, I don’t know the right word…” (Commissioner Lew Hilkert put in “controversial?”) “Divisive and controversial as it may have been portrayed.”

She went on to explain, “I got an email from Commissioner Hilkert, because I did email the clerk out of professional courtesy that City Council had the intention to extend the DORA permanently versus one year.

Commissioner Hilkert did respond and asked, out of courtesy to the county courts, and if I misquote you let me know, they would ask that the times be changed to 5 p.m. while the courthouse was not in session. Fair?” Hilkert responded that this was correct.

Mayor Schlade proceeded to explain that she advised council of that. Council asked Council President Mary Leatherman and Mayor Schlade to speak with the Commissioners to “get your thoughts and conversation.” (Ms. Leatherman was unable to attend.).

-as of October 2021, almost a year since it started, only 1300 DORA cups were sold to businesses by the Chamber.

-There have been no extra law enforcement issues or trash issues

-The City decided to not allow DORA during Jubilee

Judge Gallagher said that as far as the judges are concerned, “We were surprised that we were the requesters of any information. I was not aware of this being presented to Council.

“Judge Stelzer and I have talked about it and we have not seen any issues that have been a problem for us. We also recognize that we have no power over the City.”

“The City is doing this, and the County has a resolution as to alcohol consumption on County Property, so I am not sure if there is a thought that that is going to be changed, or what the Commissioners are thinking on that end, but I think we are not making a stand on any of this.” She asked Judge Stelzer to correct her if she was wrong.

Judge Stelzer said, “When this first started none of us knew what it would look like. It has been a year. From our perspective we have seen no problems. It is good for the community. We like what has been carved out by the Commissioners.”

“We are comfortable with the way it has operated over the last year, and so I don’t have any personal complaints in terms of any problems. If a problem would occur in the future, we will address it.”

In further discussion, the boundaries and the hours were covered, with Commissioner Hilkert expressing his concern that there are a lot of people around the courthouse when it is in session and “what if they start consuming alcohol and they don’t like the way things go in court? What is going to happen then?”

He again expressed that he feels it is “respectful to the courts that it begin at 5 p.m. to 11 p.m. because of the activities going on, especially the days when you really have a lot of people coming and going.”

Judge Stelzer responded, saying, “In part that is created because there is only one entry into the building because of a security issue. So I understand the concern.”

“Secondly, the fact that we have now had a year and that issue has not developed, gives me comfort. If it would occur in the future we can address it, but it hasn’t happened in a year. “

“Yes we do have lots of activity for various types of cases, and yes they can be emotional and challenging at times, but we really haven’t had a problem.”

Judge Gallagher agreed about the level of activity and pointed out that this is why they have security on the first floor. “Luckily they are able to view and see things that are going on.”

She also stated that no one has come in with a DORA cup, “and they wouldn’t because security is in place.”

Commissioner Hilkert and Mayor Schlade both made comments on how they believe that this became an issue.

Hilkert said, “I wrote the email on behalf of the commissioners to you to change to 5-11 p.m. Ron (Osborn), I am going to single out the Bryan Times for the article that was put in the paper.”

“It sounded like the judges wanted it changed, and the Judges had no discussion there. I am not sure where all that information came from. I didn’t refer to the Judges. I referred only to the courts.”
He continued a little further with that thought, ending with, “So it appeared in the newspaper, Ron, that the Judges wanted it changed, so I just want to clarify that,” and Mayor Schlade added, “I think it was the headline itself that probably tripped everyone up.”

With no further discussion the commissioners went into a short recess before going into the General Session of the day.

The Commissioners voted to approve:

-Supplemental Appropriations on behalf of the commissioners, engineer’s office, juvenile court and sheriff’s office; Minutes for November 4, 2021 and payment of bills

Commissioner Lew Hilkert reported that he “did a driveway of Opdycke Park” and spoke with Engineer Todd Roth and was pleased to discover that a Tournament was already held on the Disc Golf Course, since it’s opening.

The parking lot had at least 30 vehicles and the property was filled with people playing Disc Golf on Sunday, November 7, 2021.

Following another short recess, the Commissioners met for a Final Hearing for Ditch #739 marked Coolman. WC Ditch Maintenance Manager and Drainage Engineer, Brian Fritsch was asked to address the commissioners concerning this ditch. Also present for the hearing was Jeff Jacobs, property manager for his son Stephen Jacobs.

Fritsch reported that after looking at the tile again since the first hearing and doing research and survey as well as checking out the tile, he does not believe it is in “drastic need of replacement.”

He recommended that the commissioners not proceed any further with the project and the it be “dismissed and done away with.” He responded to questioning that it is not a tile of record and that if the two or three landowners who have a vast majority of the watershed want to repair it together, they could do that.

Commissioner Brian Davis asked Mr. Jacobs if he was for or against the approval and when he indicated that he is against it, Davis assured him that it would be taken care of that way.

A motion was made to deny the petition #739 Coolman on the grounds that the cost does not exceed the benefit. All commissioners approved the motion and with no further business the session ended.

After another recess, they went back into session just long enough to adjourn for the day at 10:30 a.m.