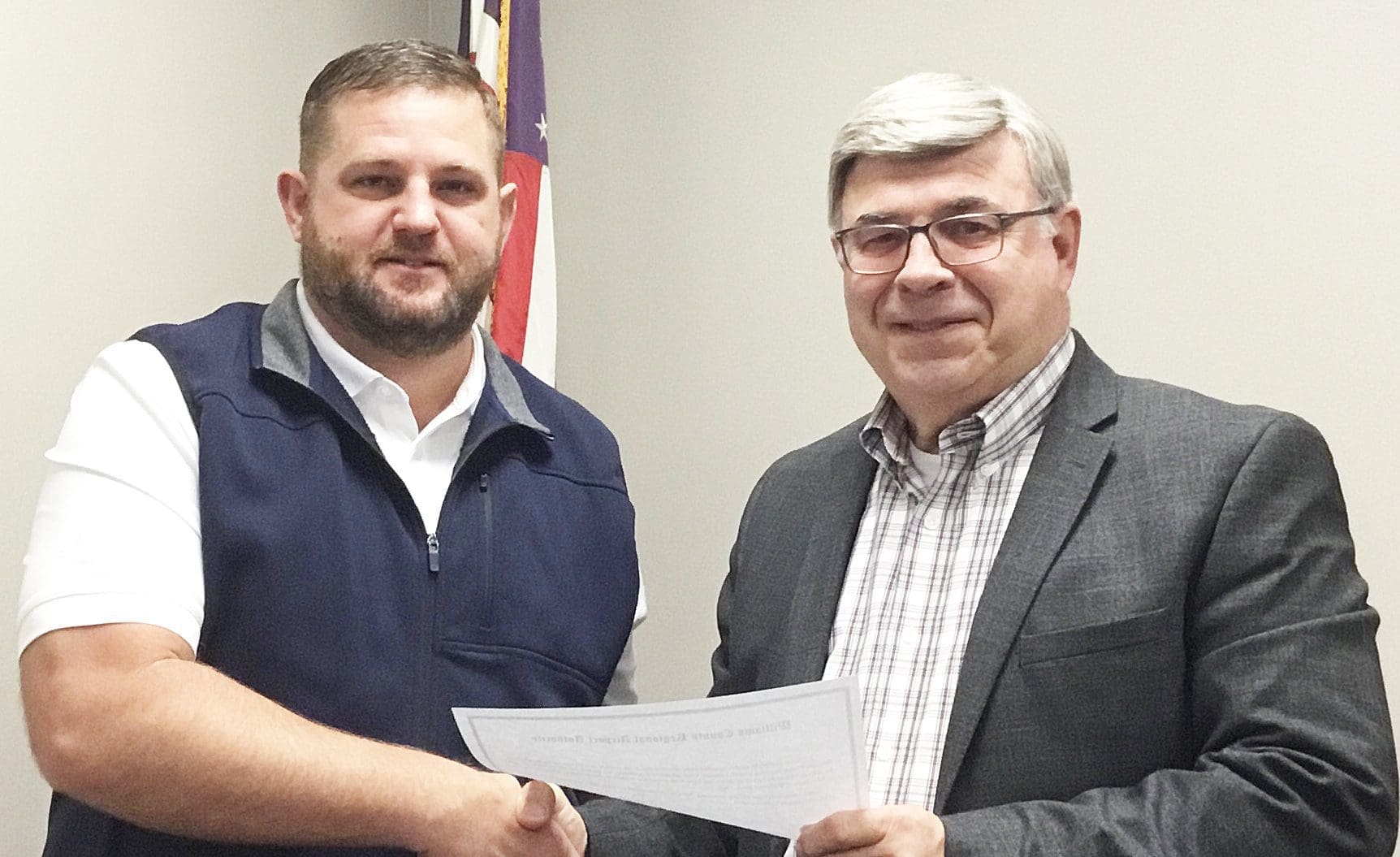 AIRPORT BOARD … Charles Traxler was sworn in by Commissioner Lew Hilkert at the January 23, 2023 commissioners meeting as the newest member of the Williams County Regional Airport Authority Board. (PHOTO BY REBECCA MILLER, STAFF)

Hilkert administered the Oath of Office. During the general session at 9 o’clock, the commissioners approved Resolution 47, supplemental Appropriations and credit card appropriations from the engineer’s office were signed.

The payment of bills as submitted by the auditor was also approved.

Hilkert reported to the others that he has the land paperwork done for the rental of the land near Hillside Country Living.

With no further business they took a short recess before County Treasurer Kellie Gray came for her Investment Advisory Meeting.

They discussed what investments have been taken care of since their last meeting, and as this was Gray’s meeting, it was not recorded for the commissioners’ records.

Pat McCauley, Public Affairs Liaison for the Office of Ohio Treasurer (Robert Sprague), met with the commissioners to give a state treasury update.

He spoke about four different programs which he thought might be of benefit to Williams County, which were:

-AgLink, a program that had some major changes that are really helping area farmers. The amount allowed in the AgLink loan has been changed from $150,000 to $500,000 and it is now available all year long instead of only once a year.

-Ohio Checkbook, a transparency tool that allows residents to check on the way money is spent. He said that the work used to be “farmed out” but now it is being taken care of in home and is saving the taxpayers a million dollars a year.

Hilkert asked how it benefits the residents and the commissioners, and McCauley said it allows transparency within limits that don’t let private information out, and it is free of charge to whoever uses it.

He stressed that any organization using taxpayer dollars to run is eligible to use it, so townships, villages, fire departments, etc. should call for info.

-OMAP (Ohio Market Access Program), allows communities to use the treasurer’s office credit rating if they are taking out short term loans over capital projects.

Can be used for roads, sewer, a new fire engine, anything capital intensive and is available to all districts, villages, townships, etc.

-Stable Accounts, like a 529 saving for college, but it is for someone with a disability. Parents can save for the future of their child, without a cap, so that when they reach a point when they could live on their own, or drive a vehicle, it allows them to have some savings toward that.

It also gives parents some peace concerning the question, what if they die before a disabled child.

Anyone can put money in the account and they even have a payroll direct deposit system set up for it.

Businesses, family and friends can all take advantage of that to put money into the stable account for the disabled person.

-The last meeting of the morning was held with Williams County Engineer Todd Roth and Darrell Moore and Rich Derks from Hillside Country Living.

Hilkert stated that they were meeting “in regards to the sanitary sewer and some issues with storm water entering the sewer system.”

Roth explained that Toby Rupp, who was unable to be at the meeting, had spoken with him recently and he has been watching the discharge and it is about 10,000 gallons a day, 6,000 gallons a day when dry, and doubling during a heavy rain event.

“It is not an emergency but it does affect the plant, washing the things out that we need to stay in the plant,” he said.

Following some discussion of the details it was agreed to figure out what exactly is happening and to report back in August. Long term, they want to get it working correctly.

With no further business, they adjourned for the day.