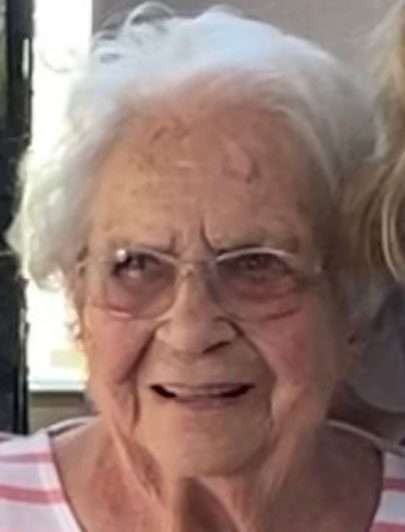 Born on November 14, 1925 in Waterville, Ohio to the late Stanley and Marian (Burch) Netcher. She graduated from Metamora High School in 1943.

On August 25, 1943 she married Woodrow Bowers. They were married for 57 years before his death in 2001. Surviving Alberta is her daughter Vena (Phil Lillich), two sons Dane (Susan) and Woodrow Jr. (Christina), all of Wauseon; grandchildren Kelsey and Gabriella of Wauseon; Nathan and Nicole of Redding, California; Jed and Courtney of Wauseon; brother, James Netcher of Clovis, New Mexico and special niece and nephew, Kim and Guy Hill of Napoleon.

Preceding her in death were her parents, husband, and three brothers Laurence, Richard, and William.

Alberta worked most of her life in restaurants in the area, former Kay’s and Sticks in Wauseon, former Hotel in Delta, and Traditions in Napoleon. She was very active in the American Legion Post 265 Auxiliary and was past President several times.

Alberta was always cooking, making desserts, and a variety of candy for the holidays for family and friends.

She enjoyed sewing and crocheting afghans and towels for family and friends. She was a member of the former Oasis Fellowship Church in Wauseon. Alberta lived with her daughter or son Woody and his family for the last 11 years.

Alberta enjoyed going to the lake with her family in the summer and also her time in Florida every winter with her daughter.

She enjoyed vacation with her son, Woody and his family, while there she enjoyed playing and baking with her grandchildren especially the two youngest girls and watch them become young ladies.

There will be no service and burial will be private in Swanton Cemetery. The family requests memorial contributions may be made to Fulton County Humane Society.

Online condolences may be offered to family at www.grisierfh.com Edgar-Grisier Funeral Home in Wauseon has been entrusted with the arrangements.