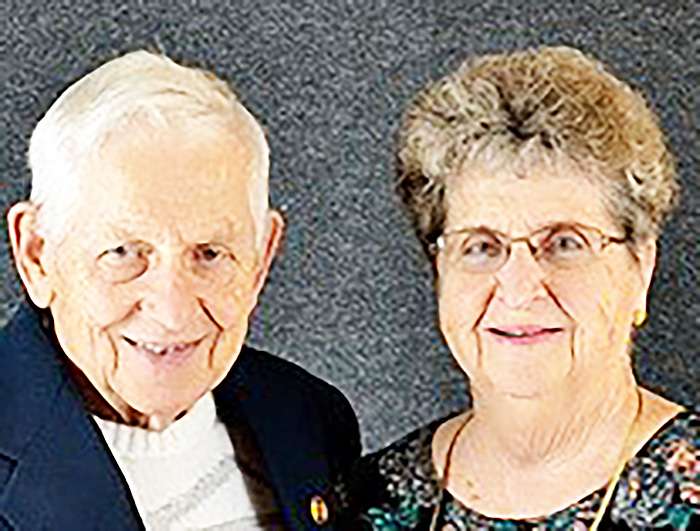 Ben was born Aug. 8, 1932, in Holgate, Ohio, and Helen was born June 11, 1933 in Bryan, Ohio. Ben and Helen were devoted to their children and grandchildren, and both lived lives of service to their church and community.

Ben worked for Aro Corp. in various capacities for nearly 40 years. Ben was a founding member of the Bryan Area Foundation.

He was very active in the Lions Club, serving on the board of directors and in many other leadership roles, recently being honored as a Past District Governor with 50-plus years of service.

Ben served as District Governor in 1969, and he and Helen were proud that they were able to take their family of six to Japan for the Lions’ International Convention that year.

He chartered many new Lions Clubs across Northwest Ohio. He met many people through the Lions Club, selling Christmas trees and cheese, and participating in many other fundraisers.

He helped to plan and build the Imagination Station in the Recreation Park and was instrumental in the installation of the Lions drinking fountain.

Graduating from Napoleon High School in 1951, Ben was very active in his class reunions. He furthered his education by earning an associate’s degree from Fort Wayne Business College.

He served in the U.S. Army during the Korean War, until his honorable discharge in 1954. As a dynamic speaker and storyteller, he was invited to emcee many events.

Portraying Clifford the Big Red Dog, he visited schools and the library. He was also known at church as the “Candy Man,” filling his suit coat pockets with candy to the delight of children.

Helen had a broad range of interests and talents. She had a lifelong love of the piano, declining a music scholarship to attend college in Chicago after her high school graduation but continuing to play throughout her life.

Over the years she was involved in the church choir and bell choir and played organ, piano and carillon. She was involved in several church groups, including the United Methodist Women and the music committee; she also served a number of terms as church trustee.

A lifelong learner, Helen took a variety of courses through Bowling Green State University and Northwest State College. In her early married years, she worked at the Weaver law firm and then raised her family full time until she began working at the Post Office in the mid-1970s.

She volunteered for nine years as a teacher’s aide for third-graders and drove for the Head Start program. She also volunteered for the Williams County Public Library in the genealogy department for several years.

She enjoyed golfing and bowling well into her 80s. She was the behind-the-scenes person for Ben’s endeavors with the Lions, creating programs and membership pamphlets, as well as being at his side accompanying and helping him host various Lions events.

Family life kept them active and vibrant; they were very proud of their children and grandchildren. They raised their family in Bryan and spent time at the family cottage in Indiana.

They always enjoyed celebrating holidays and birthdays with a good meal, and Ben was frequently known to pull a comb and wax paper out of his pocket to hum along with the “Happy Birthday” song.

He also was well known for going to the dessert table first, with a big smile on his face. Helen enjoyed getting the family together to complete jigsaw puzzles and always remembered birthdays and anniversaries with a special card.

Both relished telling the story of how they met – at a Bryan-Napoleon basketball game. After retirement, they were rarely apart and enjoyed traveling the world, including Europe and Australia.

Visitation will be held Friday, June 10, from 3 p.m. until 7 p.m. at Wesley United Methodist Church, 903 Center St., Bryan, Ohio. Funeral services will take place at the church on Saturday, June 11, at 11 a.m., with visitation beginning at 10 a.m. Burial will follow at Shiffler Cemetery, Bryan, with Military Rites performed by the Bryan VFW and American Legion. Friends and family are encouraged to wear a mask at the visitation and services, and please, no perfume or cologne.

Those who would like to make a contribution in memory of Ben and Helen may do so to the Bryan Lions Club Scholarship Fund, Wesley United Methodist Church or the National Multiple Sclerosis Society.