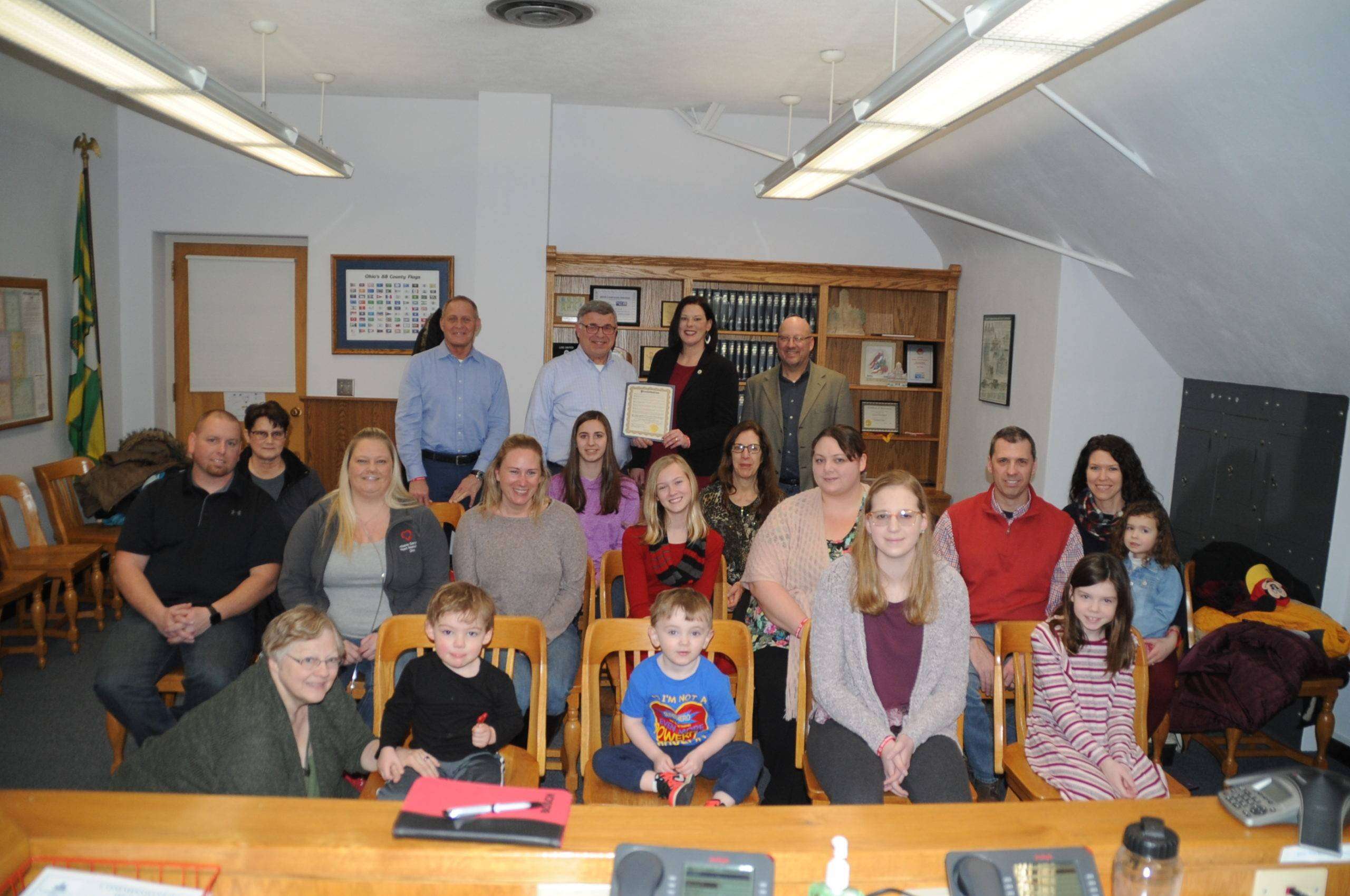 You watch Bryson Hoover running around, and you see the typical four year old boy. He is a dynamo of seemingly endless energy, unbridled enthusiasm and curiosity, all tied together in a package of perpetual motion with a big smile, sandy brown hair and blue eyes. Bryson brings everything that you would expect from someone of his age and gender.

There’s just one little thing about this little man that you would not expect if you were tasked with keeping up with him…his heart almost killed him. Bryson was one of the 40,000 that are born each year with a CHD, a congenital heart defect.

“Bryson was born six weeks early, and no one knew why,” said his mother, Amanda Hoover, who also arranged for the special proclamation. And when he came early, the doctors just tested him and gave him an APGAR (Appearance, Pulse, Grimace, Activity, and Respiration) test and he didn’t succeed all of the levels. He was supposed to get 8 out of 10, and he didn’t. So they sent him on to the NICU (Neonatal Intensive Care Unit) with a ‘wet lung’ diagnosis.”

“They didn’t hear anything. They didn’t know anything about congenital heart disease in him. While we were there for two weeks in the NICU, he remained the mystery man. They couldn’t figure it out. The lung doctors and the heart doctors were fighting between each other, and they couldn’t come to a conclusion because he was a heart baby, but it was his pulmonary veins which led from his lungs to his heart.”

“They then found the hole in his heart also; that’s actually what allowed him to be surviving. That hole let the blood leak from one side of the heart to the other side of the heart, because the veins were not where they were supposed to be.” Before he reached his first birthday, little Bryson Hoover was locked in a battle of survival.

While Bryson and his medical team were fighting to keep his failing heart active, Amanda Hoover was getting a crash course in the care of a CHD baby. “Because of this situation,” she recalled, “…I learned all about being a ‘heart mom’. Being in and out of the hospital. Gravity feeding him.”

“How to insert an NG (Nasal-Gastric) tube, and oxygen levels. I mean everything – very quickly – within three months time, and being home and in and out of hospital because of his heart not working correctly.”

The immense stress of not knowing if her child was going to live or die wore heavily upon Hoover, but like her son, she arose with a new life and a new direction. “He had a surgery at three months,” she said, “…and then after that, we’ve been able to stay out of the hospital. But because of my very dramatic experience with him, I’ve been out there advocating for congenital heart defects and awareness and support because I felt alone. Within the three months time of being in and out of the hospital, I felt so alone, not knowing whether he would survive or not. And so I’m out there, and I’m helping raise the awareness. I’m letting people know that hey…we’re out here too. We can do this together…we’re a heart family.”

“Like everyone else is out there in the world, struggling with their own medical issues, I would like to bring awareness to this and proclaim our week, ‘Heart Week’ so it can always be known for the week of February 7 through the 14th that this is a journey for everyone. It’s not just us. Anyone can be a heart baby; anyone can be a heart mom. So I wrote a letter to the Mayor. She let me know that yes, this is something that sounded like she would want to do it, and then bring in the Commissioners also so we could make it county-wide, not just city of Bryan…and we succeeded.”

As he zipped in, out and around the Commissioners’ conference room, his mother said with a smile, “Bryson is doing wonderfully. He just recently graduated to bi-annual cardiac appointments with his cardiologist, and that’s huge. It’s big. We don’t have to go and see his cardiologist for two years now. Anyone can be affected. I don’t know if I said this enough, but I wasn’t a heart mom until I became one.”

“He wasn’t a heart kid until he was born, no one knew about it.” The purpose of the day was made clear in his smiling blue eyes, “Bringing attention to it and support,” Hoover said, “…raising funds and doing what we do to help increase the medical research. Things like cancer are really funded, and congenital heart defect is not nearly as funded as cancer is.”

While Bryson is the prototypical positive poster child for CHD, it must be known and understood that CHD is not something that is always diagnosed in the first few hours and days of life. Many of these heart defects escape detection for months, or even years after birth.

Frequently, sudden cardiac deaths in young children are traceable to an undiagnosed CHD. In some cases, that diagnosis can come as late as adulthood, making the patient an ACHD (Adult Congenital Heart Defect) case.

In attendance at the February 6 ceremonies was Amanda Harper, the Ohio ACHD Coordinator and Co-Lead Coordinator of Northwest Ohio. Harper knows all about the spectrum of ACHD, not from classroom education, but rather from experience…she is an ACHD patient.

“There was not anything like this,” Harper said, “…I mean nothing back when I was born; no one knew anything. CHD has no cure; there is no cure.” Watching Bryson, who had by this time taken up a serious fascination with the office printer, one would wonder how that could be the case.

As he sat on the lap of Assistant Clerk of Commissioners Robin Kemp, banging out his own carefully crafted documents for the printer, you did not see someone with an incurable condition. “They’re always having a battle with something,” Hoover said.

“Whether it’s just illnesses that grab hold of them because their immune system is a little bit compromised, they can repair it, but it’s not nearly as good as having a healthy heart. There’s always that possible thing that’s in the back of your head. We might have a pacemaker that may come up, just because we had to have heart surgery, there’s always something.”

“There’s no intermission; it’s like a Band-Aid fix,” Harper said. “As child or adult, your heart grows. Me, I have a very enlarged heart. Even though I have half my heart with holes in it, it still gets enlarged. So it’s like Band-Aid fix. Once I start having an issue, that Band-Aid gets ripped off, and then I have another issue.”

“Then with the pacemaker, you have to go in there. You’ve got your batteries constantly, the wires, and then you’ve got other issues that can happen when you have a pacemaker. For instance, I have a pacemaker, and now I have other electrical issues because of my pacemaker. So it’s a quick Band-Aid fix for one thing until something else happens. That’s like the whole oxygen thing.”

“You know, I’ve been on oxygen for three years now, and they’re trying to figure out how are they going to fix this issue so that I can come off of the oxygen, and not create another issue without having transplant.” 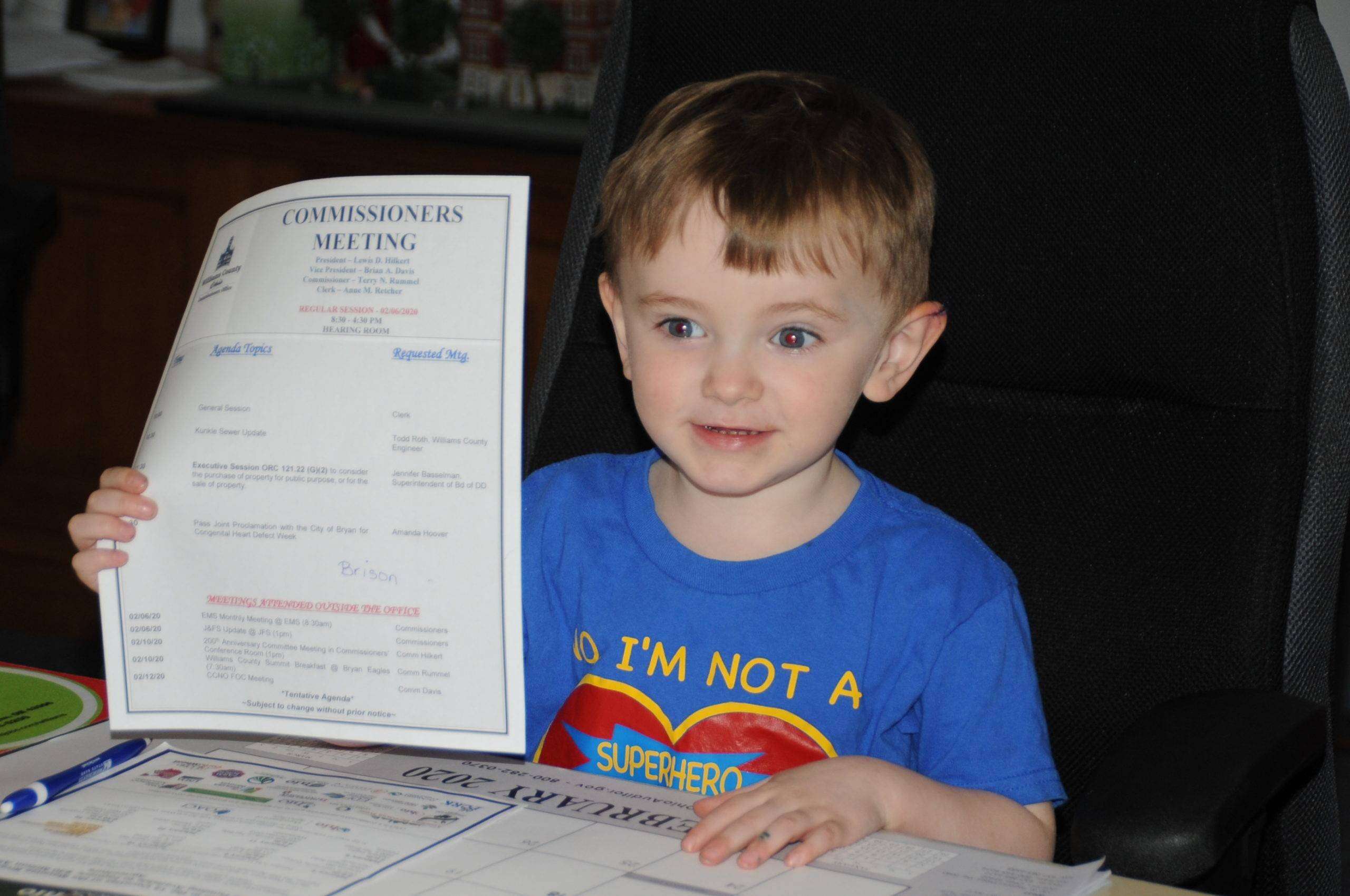 HEY GUYS! WE’RE ON THE AGENDA! … Seated in the chair of Board of Commissioners President Lewis Hilkert, four-year-old Bryson Harper shows off the agenda for the day.

What all goes into the diagnosis of a CHD? Harper explained, “Sometimes when babies are born, you can detect it. Sometimes it’s not always detected on an ultrasound at 20 weeks, and then majority of it is sometimes not detected until later on when a child is sick…or even in adulthood. Something goes on and then they find an ASD (Atrial Septal Defect) or VSD (Ventricular Septal Defect), which is a hole in the heart or in the wall.”

“Every child needs to be checked at 20 weeks,” Harper continued, “…and you can do that by the pulse-ox (testing for blood oxygen levels), and asking your doctor or OB every single question you can think of. The questions are, is the heart rate normal? Do you see four chambers of the heart?”

“Can you see four valves that are functioning properly? Does the wall, the septum separating the chambers, appear intact, and also is the heart functioning and positioned correctly? When you go in for your ultrasound check, they should be going through and checking all that, and then you start asking those questions.”

What of a heart murmur? Shouldn’t asking about the cardiac tones and the presence of a murmur be amongst the questions? Harper said, “When you’re asking the questions, that’s also pertaining to any heart murmurs and anything else like that. They usually do tell you that they don’t hear a heart murmur.”

After the ceremonies, Bryson went up and took the seat of Commissioner Lewis Hilkert, where Commissioner Hilkert and Clerk of Commissioners Anne Retcher kept him well supplied in paper for his artistic doodling. Others, like little Liam Bowen and Annie and Claire Kunsman, were focused intently upon the red frosted heart-shaped cookies that were made available. Everyone though, some obviously more than others, was wrapped up in conversation about the reason that they were all there…CHD.