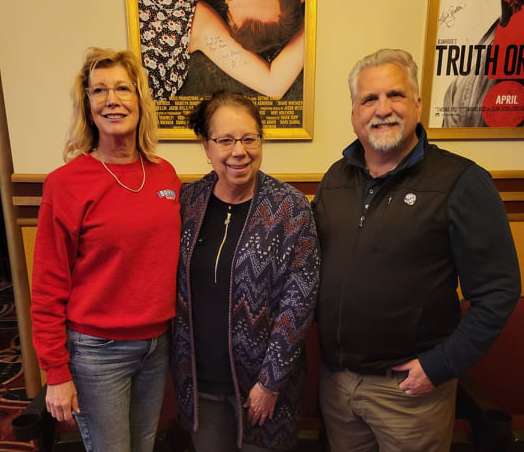 Saturday March 12, 2022 The Bryan Theatre premiered the movie ‘Getting Grace’. Attending the weeklong event was Daniel Roebuck, star of the show, and Cindy Kimbel, Director of Hospice in Williams County.

The movie is called ‘Getting Grace’ after a young and spunky teenager, with cancer, begins to explore what will happen to her and the people she loves after her death.

The message behind the movie to celebrate life and not take a day for granted hits home for most people. The movie is full of laughter and tears along the way of Graces discoveries.

In an interview with the star of the movie, Roebuck explained the idea behind the movie and how he ended up in Bryan, Ohio.

Daniel advised he got a script from another writer asking him if he would be in this movie and after reading the script Roebuck decided he wanted to star in it and direct it.

Roebuck felt so passionately about this movie and felt like it would be his directorial debut. In the course of seven years Roebuck got the funding to produce it, and he worked on a re write of the script with the original writer. Roebuck produced ‘Getting Grace’, directed the movie and starred in it.

Roebuck opened the movie four years ago. From this movie he has had the opportunity to remind people to live life to its fullest and celebrate life.

The Bryan Theatre booked this movie and wanted to make it into an event, where they would be giving a donation to the CHP, Home Care & Hospice.

Roebuck attended the event personally. The theatre wanted to make the event a week long. After the event, the theatre donated all of its proceeds to the CHP.

Cindy Kimbel, CHP Director also attended the event. Cindy has been working with hospice for since 1992. She has been at Williams County for 9 years.

She stayed at the event to speak with the public about hospice care, and what the Bryan sector has to offer. Kimbel is the one who received the donation from the theatre for the CHP.

The Bryan theatre shared Roebucks passion for this film. The movie is based on the original writer’s niece and her story.

Roebuck shares other passions in life, in addition to acting, producing and writing, enjoys motivational speaking to young people. He likes to remind them that the only thing that stops them is their own personal fear.

He talked about his own personal life of releasing a movie independently and then rereleasing it again. He said this should have been an impossible task, but impossible it was not.

The movie does talk about celebrating life in an impossible situation and is very relatable, Roebuck says.

People can see their father or mother or sister in each of these characters. When people view the film Roebuck loves hearing people’s stories and is amazed at people’s strength, especially after losing a loved one.

After doing the impossible with one movie, Roebuck states that he will be directing and starring in more movies.

His upcoming movie is called ‘The Munster’s’ and will be starring as Grandpa Munster. Roebuck wants people to remember to celebrate life and live it to the fullest, no matter the odds.