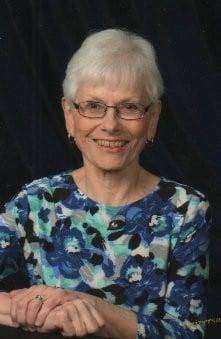 Deanna married William Neil Gipe, June 2, 1957 in Van Wert County, Ohio and he preceded her in death in January of 2007.

Deanna and her husband moved to Montpelier in 1969.  She worked at Robinair in the office until she retired in 1998.

She is survived by her loved ones Scot, Linda, Emma and Jack Zenz of Pioneer; and Armeda Sawmiller of Montpelier.

Visitation for Deanna will be on Tuesday, August 11th from 4-7pm at St. Paul’s United Methodist Church in Montpelier.  Services will be on Tuesday at 7pm at the church with Pastor Richard Blank to officiate.  On Wednesday there will be a time to receive friends from 1-2pm at Alspach-Gearhart Funeral Home in Van Wert, Ohio.  Graveside services will follow at 2pm at Woodland cemetery.

Memorial contributions may be made to Montpelier Area Foundation – Gipe Scholarship Fund or to St. Paul’s United Methodist Church.  Online condolences may be left for the family at www.thethompsonfuneralhome.com.  Funeral arrangements have been entrusted to the Thompson Funeral Home of Montpelier and Alspach-Gearhart Funeral Home in Van Wert.