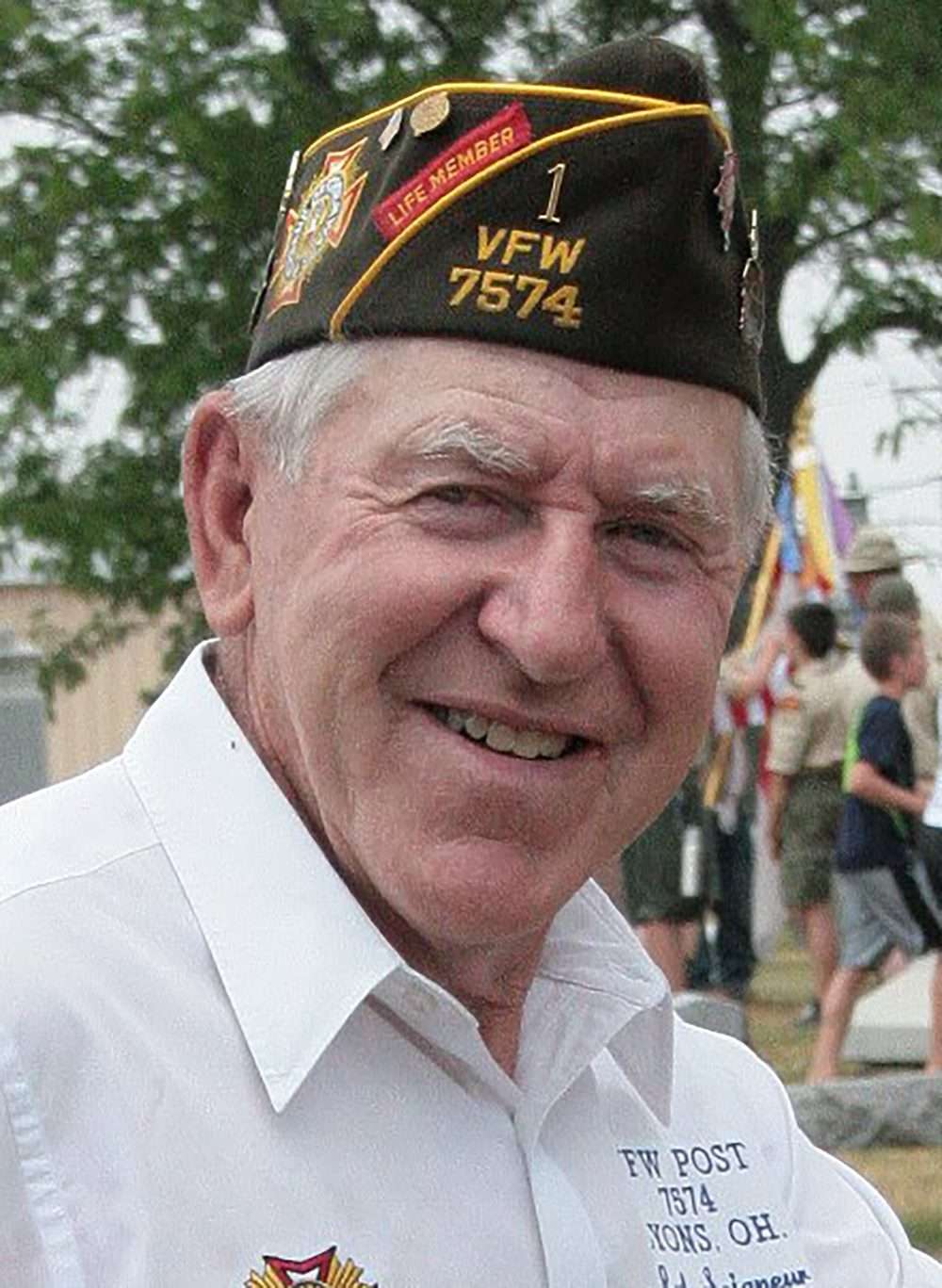 Donald Lyle Seigneur, age 94, of Lyons, Ohio, known for his beautiful smile and blue eyes, being a quintessential grandfather, and humble Servant of the Lord, passed away Thursday, September 9, 2021, at Kingston Care Center in Sylvania.

Lyle was drafted in the United States Army during WWII and served as a Merchant Marine on a ship transporting supplies.  He later was called back to serve in the Korean Conflict.  Lyle was recipient of 2 Purple Hearts.

He was a proud member of Lyons VFW Post #7574 and served on the Burial Squad.  Lyle was often seen working at the VFW Post he was so proudly an active member of setting up for events, doing repairs, keeping the hall clean and always preparing for and a smiling server at the popular fish fries.

Lyle was an avid athlete and played baseball and basketball in school.  He continued to play baseball after returning from military service, even dreamed of playing professional baseball.  Instead, he knew being a devoted husband, father, and overall family man, was more important.

After returning from service Lyle also became an avid golfer. He enjoyed playing with family & friends and traveled to play a variety of courses and in local leagues.

He loved playing with his father, the family even started their own family tournament when his siblings also became hooked. He worked all year at honing his game so he could take on his family at the “Seigneur Open”.

Lyle worked for the Metamora Elevator, formerly known as Lyons Grainery. He walked to and from home daily greeting everyone along the path.

At Christmas time, Lyle would hoist thousands of lights to form a 30 ft Christmas tree with a star on top high atop the grain silo. Each year the display grew to include lights forming a moving angel and different seasons greetings written in lights.

What started as using lights from home to decorate the silo railing became a display that could be seen for miles around and which was featured in several newspapers and television news.

Lyle was a life-member of the Lyons Christian Church, where he served as church deacon. He took pride in the appearance of the outside of the church and was responsible for keeping the lawn looking immaculate.

Besides being very active in the church, he also took great pride in the Lyons Community.  He was known by most residents as the “Face of Lyons”. He loved his hometown and its people where by choice he would have lived till the end.

Besides his beloved wife, Yvonne, Lyle was preceded in death by his parents; son, Gary Seigneur and sister, Reva Miller.

Friends and family may visit Tuesday, September 14th from 4 to 8 p.m. at the Weigel Funeral Home, 413 E. Main St. in Metamora (419.644.3601). Funeral services will be held Wednesday, September 15th at 11:00 a.m. at Lyons Christian Church, with Pastor Heather Schimmel officiating. Interment, with Military Honors, will follow at Lyons Cemetery.

In lieu of flowers, memorial contributions may be made to Lyons Christian Church, 138 E. Morenci St., Lyons, Ohio 43533.