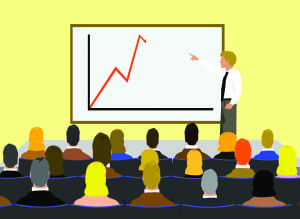 At its March meeting the Fayette Area Chamber addressed a number of organizational and operational issues, accepted reports from village officials and viewed an internet presentation demonstrating options for the chambers proposed web site.

After calling the meeting to order, Chamber President, Trevor Hibbard called for and accepted reports from the officers.
[emember_protected custom_msg=”Full content protected for online subscribers.  Purchase a one week subscription from the top menu bar for just $1.99 to read all online content (full access).  Longer subscription plans are also available.  Subscriptions cover our costs to attend local events; bringing forth Hometown News Coverage to our communities.”]
A slate of officers was presented to the membership for review. After discussion, a motion was made to accept a slate composed of:

All of the officers for 2013 represent Main Street businesses and organizations that have a history of commitment to the community and are vested in its wellbeing.

As a result of discussions and concerns voiced by Chamber members at its previous meeting, Mayor Ruth Marlatt requested that Village Administrator Steven Blue and Scott Clawson of Gleason Construction be on hand to review the status of the Combined Sewer Overflow (CSO) project for the membership.

Administrator Blue reminded those present that the project was approximately 20% complete and that citizens should expect interruptions to usual traffic flows throughout the year.

When asked about the replacement of trees removed over the course of the past three years and as a result of this project, Blue stated that funds had not been appropriated for their replacement in fiscal year 2013.
He also cautioned citizen to be prepared for rate increases in the near future resulting from the CSO Project. Even though the $6.4 million dollar project has a significant principle forgiveness component courtesy of the American Recovery Act and an additional $600,000 through a Community Development Block Grant, local residents will still have to cover the remaining costs of the project.

Gleason spokesman Scott Clawson said that while their crews are working hard to ensure that inconveniences to residents were kept to a minimum, there have been many unanticipated interruptions caused by severing unrecorded water, sewer and service lines.

Blue made maps available for members to view and distribute.
Mayor Marlatt also presented a written report on the status of the Village’s Web Site, the s CSO Project, the TRW Road Project, additional paving initiatives in the community as well as staffing updates and meeting schedules.

In other business, the Chamber reestablished a graduated Membership Fee Scale 2013, and initiated a two month Membership Campaign that will extend through April. A letter will be mailed to area businesses in the near future.

A call for Citizen of the Year Nominations was issued by the Chamber. Nominees should reflect individuals whose service to the community has had a positive impact on area residents. Written nominations are to be mailed to: Citizen of the Year, C/O Fayette Area Chamber, Box 4, Fayette, Ohio 43521.

Gene Sugg of RevItUp PC concluded the meeting with a presentation detailing how the Chamber might structure its proposed Web Site.

The meeting was closed with refreshments and roundtable discussions.[/emember_protected]

Be the first to comment on "Fayette Area Chamber Addresses Issues"