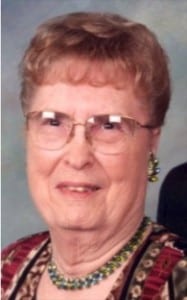 Golda N. Boyer, formally of Archbold, Ohio, passed away early November 5, 2012, at the Lutheran Nursing and Rehabilitation Home in Napoleon.

She was born December 21, 1928, in Harrison Township, Henry County Ohio, the daughter of William L. and Elfie S. (Wilford) Naveau.

Golda was a member of Sharon United Methodist Church, Napoleon and a member of the Beta Zeta chapter of Delta Kappa Delta, an honor society of women educators; National Education Association; Ohio Business Teachers Association; Henry County Retired Teachers Association, and the first president of the Pettisville Teacher’s Association.  She was a charter member, and trustee, of the Pettisville School Foundation.  She also served several terms on the board of the Quadco Rehabilitation Center of Stryker.

In addition to her husband, she was preceded in death by her parents; brothers: Herbert, William (Skip), and Lowell Naveau; and sisters: Sylvia Knapp and Corinne Apel.

She is survived by one brother, Murel (Betty) Naveau and a sister, Patricia Ann Naveau, both of Napoleon;  one daughter: Irene Nichols, Solon, Ohio; one son: William (LuAnn) Boyer, Archbold;  four grandchildren, and two great grandchildren.

Friends will be received 2 – 8 pm November 9, at the Grisier Funeral Home, Archbold, Ohio. A private burial service in the Hoy Cemetery, Henry County, will be followed by a Memorial Service at 11:00 am, November 10, 2012, at the Sharon United Methodist Church, County Road P, Napoleon, Ohio.  A luncheon in the church basement will follow the service.

Preferred memorials are to: Pettisville Teacher’s Association Scholarship Fund; the Sharon Methodist Memorial Fund; or a charity of the donor’s choice. Online condolences may be offered to the family at www.grisierfh.com.