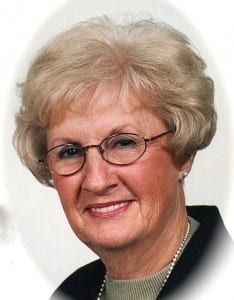 Jane Ann Stuckey, age 78, of rural Bryan, Ohio, passed away Monday, November 5, 2012 at Defiance Area Inpatient Hospice. Prior to her retirement in 1996 she had worked for Health and Human Services in Bryan for 20 years.

Jane was born in Fulton County, Ohio on January 14, 1934, the daughter of Earl and Helen (Leupp) Ruffer. On December 20, 1953 she married William “Bill” Stuckey, and he survives. Jane was an avid golfer and enjoyed traveling, but most of all she loved her grandchildren!

A Celebration of Jane’s Life will be held at 11:00 A.M. Monday, November 12, 2012 at the Grisier Funeral Home in Stryker, with Pastor John MacFarlane, officiating Interment will be private in the Pettisville Cemetery. Friends may call at the funeral home on Sunday from 2:00 P.M. until 8:00 P.M. The family requests that memorial contributions be given to Community Health Professionals, Defiance Area Inpatient Hospice. Online condolences may be offered to the family at www.grisierfh.com.