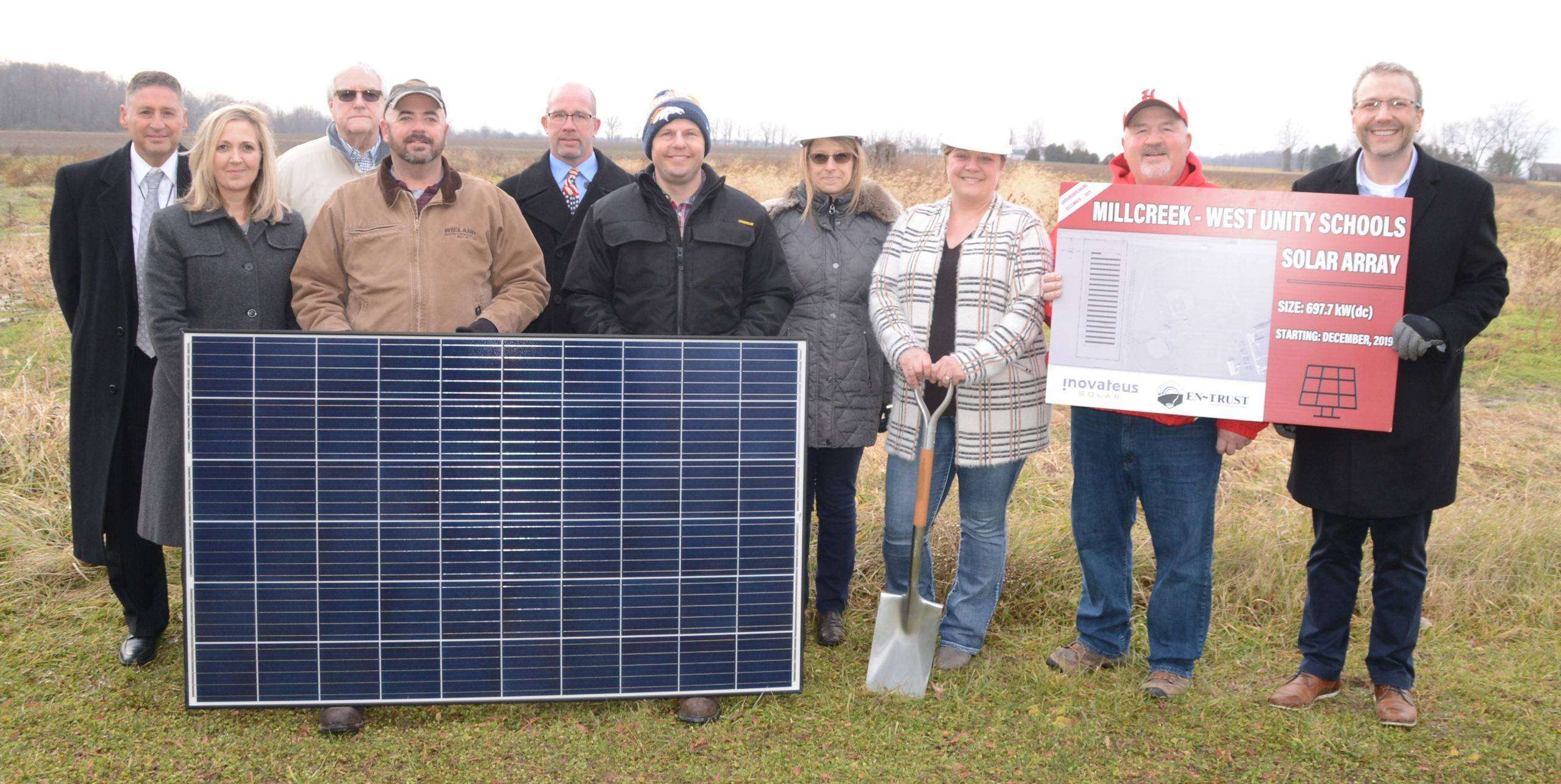 If you just so happened to be driving past the Hilltop Schools on the afternoon of December 3, and saw a small group of people braving the cold winds out on the far western side of the developed property, they were there for a very good purpose.

The event was a formal ground-breaking ceremony for a project that is finally coming off the boards and into active development. “We’re putting a 697 Kilowatt DC solar array here, and it will roughly take up about three and a half acres of land,” said Nathan Vogel, Vice President of Business Development for Inovateus Solar of South Bend.

“Well, it was already in the works before I became superintendent,” said Millcreek-West Unity School District Superintendent Jim Wyse. “It’s been in the works probably for about a year and a half, almost two years, but last year was just trying to finalize the land acquisition and doing all the necessary steps. It’s just a little bit longer process than what you might think.”

“Pat (Weidenhamer) actually started working with the district back in probably late 2017,” said Jeff Feasby, Engineering and Operations Manager of En-Trust, which is partnering with the Millcreek-West Unity School District on the project.

“Then when Jim (Wyse) became the superintendent, it really got pushed through and he helped us get all the contracts and everything done, and size the system. It really started a couple years ago. It takes a while to put these together from an engineering perspective, and all the logistics of acquiring land, getting the school board on board with it, and making it happen with all the permits and everything.”

This is not the first partnership between En-Trust and the district. En-Trust has been busy replacing 1,550 fluorescent and incandescent light fixtures inside and outside the school with LED fixtures that are not only much more durable, but also consume far less energy than their elder counterparts.

According to En-Trust, the overall project requires no upfront investment of the school district. Once on line, the solar array will provide reduced energy costs, and increase the predictability of the energy budget. Energy produced by the solar array, approximately 77.5% of the power required for the district, will remain at a fixed cost of $.09 per kilowatt-hour for 25 years, and the district will pay En-Trust a reduced rate for electricity.

The reduced cost of power from the solar array and savings from other improvements will fund the capital upgrade needs with zero additional costs per year, and all maintenance of the solar array will be provided by En-Trust.

The finished solar array will consist of 2,160 panels, each capable of generating 345 watts of power. Combined output for the entire array will max out at 745,200 watts DC, with an annual electricity production of 1,018,688 kilowatt-hours.

The most important numbers to the taxpayers come from the financial ledger. The district will realize $318,894 in additional positive cash flow over ten years, plus $227,638 in the lighting upgrades, funded completely from energy savings and reduced electricity costs.

“This will be turned on probably in the end of March, 2020,” said Feasby. “The real ground-breaking is probably two or three weeks away, I would say…that’s being conservative.” Why has the Millcreek-West Unity School District taken this bold step forward?

“Well, the ground was available, and it made sense to try to reduce our electrical costs and provide some green energy at the same time,” Wyse explained. “Hopefully it will also be educational for our students. I think one of the new technologies, solar fields, I think is going to hopefully be part of the future for our students, and for anybody else.”

“It’s exciting to see this finally come to fruition,” Wyse continued. “Again, I hope it’s a benefit for the community. It will save taxpayer dollars in the long run, and provide energy at stable prices. We expect energy rates to go up year after year. We won’t have to worry about that; we’ll lock in these rates right now. That’s one of the things that over time, is really going to pay dividends.”

“We’re just really thankful that the district allowed us to work on their solar array,” Feasby said. Vogel added, “Yeah, it’s exciting to see schools like this putting solar arrays out there, being leaders like this. It’s great to see, and hopefully other school districts around will start to follow suit as well.”