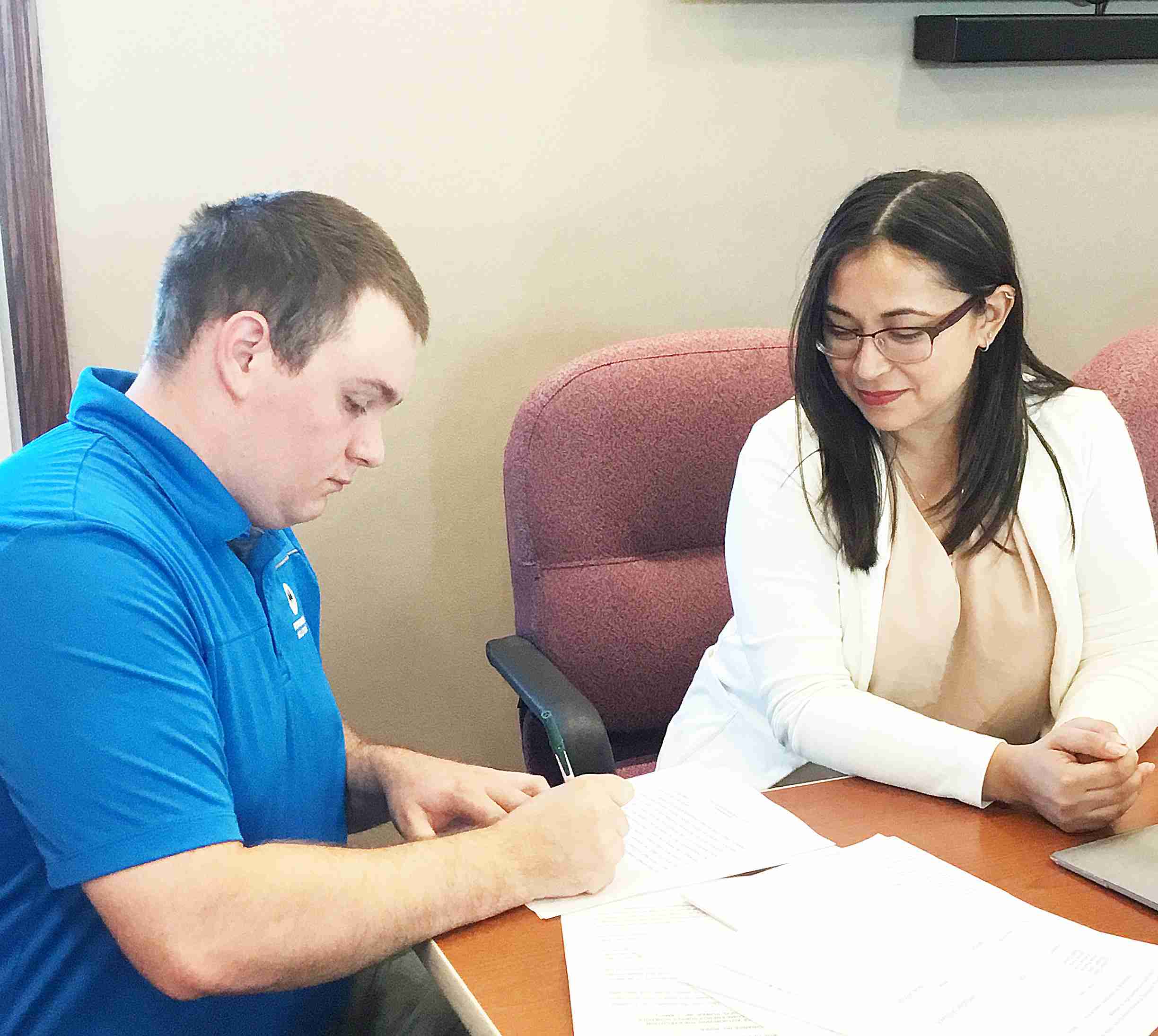 NEW COUNCIL MEMBER … Beau Zuver was appointed to Holiday City Council on July 21, 2022 and signed the paperwork physically after being sworn in. Unfortunately, Attorney Cara Wall could not get the online connection with the Notary during the meeting, for him to sign electronically which would make it official. The official notarized signature was done later. (PHOTO BY REBECCA MILLER, STAFF)

The plan to have Beau Zuver join Council was hijacked by electronic technical issues. Beau was appointed and sworn in, but was unable to participate as they could not get connected with the Notary online for his electronic signature.

He was welcomed to sit at the table and listen during the regular meeting. Wall said that she would get the Notary on Zoom later, so as not to hold up the meeting.

Moving on, Council approved the minutes of the June 16, 2022 meeting as well as suspending the rules and passing Ordinance 2022-6 “authorizing the execution of the 2023-2027 Fixed Volume Energy Supply schedule with American Municipal Power, Inc. (AMP).”

Also approved was the second reading of a Resolution accepting the amounts and rates (1.6 mils) as determined by the budget commission.

The Fiscal Officer Report was given by Mayor Pam Clark with the following items covered:

-Liquor Permit letter was sent to the village from the Department of Commerce Liquor Control, explaining that the village could deny the permit, but Council agreed they have no objection with the permit application and do not request a hearing

Bryan gets $2,466 of that and Edgerton gets $366.04 with the rest of it subsumed into the county as amounts were too small to be divided up.

Council approved the report. In the Legal Report, Wall informed council that she reviewed and made corrections to the ordinance which they just passed and she is looking into outstanding questions concerning unpaid lodging taxes from some of the facilities in town.

Mayor Clark shared with Council that she has been helping as much as possible in the office during the Village Administrator change-over.

Sam Wolfe from AMP sat down with newly appointed Administrator Blair Campbell and Mayor Clark to share information and answer their questions.

He also put them in touch with a way to apply for AMP grants and funding. Clark said she attended the Sunshine Laws meeting virtually, and Jarrett and Chelsea Funk attended live in Bowling Green.

There were no reports from Visitor’s Bureau or Audit Committee so they moved on to the Administrator’s Report. Campbell said that he received a drawing for the pavement, sewer and water for the subdivision.

The substation will start on August 15 and will take a few weeks, as they are waiting on regulators. Jeff Pierce from GBD (their Engineering Consulting firm) said that it will be fine if they need to run a temporary load for service. July 22-27 will be the time that the First Energy helicopter will be checking the lines.

His new job is going ok and he thanked Pam and Laurie for helping him with all the information needed and their help.

For Safety Committee, J. Funk said that he and Beau Zuver checked the siren batteries and the charger was not powering them.

He replaced the charger, recharged the batteries and they are maintaining a charge at this time. When the siren is tested on August 1 at 11 a.m. they will find out if it is working correctly.

Funk also said that he contacted Frontier about the hanging cable and “nothing has been done.” Wall asked if he spoke with a real person and he said he just got electronic answers and left a message.

She thanked him for trying. Funk also said that he has trimmed back the cattails on the corner of St. Rt. 15 and the road on which the Village Hall sits. Council thanked him and Shawn Clark said they can work on it together to take out even more if needed.

S. Clark asked if the property they own by the carwash can have some weed spraying done and Campbell said they do not have a landscaper at present.

Wall said she would check to see if the lease is done and if it is then the village will be responsible for the spraying.

Dawn Fitzcharles, with WC Port Authority, shared some information with council about what the Port Authority does, focused on residential growth in the county, and expressed the hopes that they can help Holiday City in their efforts to bring more housing to Williams County.

She said that the county is at least 450 housing units short. The port Authority is currently in the process of securing two lots in the county on which to build houses.

They have established that there are 200 lots available in the county and they hope to get some state assistance to secure more of those.

They meet on the fourth Wednesday of every month at the East Annex at 5:30 and are open to the public. They have been talking with local companies and banks and are working to come up with a plan that will offer options.

It is extremely expensive to put in the infrastructure which drives the price of parcels up, making it unaffordable. The one parcel of property being secured at present will probably have ground breaking by the end of the year.

Cara explained to council that they would be discussing how to work with the Port Authority in an Executive Session, when Jodie Faunce asked if it could coincide with their subdivision.

When Council members were given an opportunity to speak, Faunce brought up the possibility of adding a Splash Pad to the Village Park.

Mayor Clark said that in the past there have been a few different plans drawn up to enhance the park and those can be brought to council for consideration.

Faunce also asked that the Ohio Maps be replenished in the Visitor’s Bureau map box by the picnic tables.

With no further business, an Executive Session was called for “disposition of unneeded property.” There was no action taken.